Insulin is the hormone that gets released when we have a large amount of sugar in the bloodstream. This then causes the body to absorb that sugar and any nutrients in the blood along with it and that in turn provides us with the energy and sustenance we need to keep going. Insulin is crucial to our health and if you don’t believe me, then just ask someone with diabetes.

But at the same time, insulin can be considered something of a double edged sword. When you’re active and you eat a healthy diet, insulin provides energy. But if you’re inactive and you’ve just eaten a ton of cake, insulin begins the series of events that leads to weight gain. In this context, insulin will absorb the energy but because you don’t burn it, it will simply be stored as fat.

The Role of Insulin in Muscle Building and Weight Loss

If you’re planning on dieting and losing weight then, insulin will play an important role. And of particular importance is something called ‘insulin sensitivity’ which describes the body’s response to insulin.

If you are highly sensitive to insulin, then that means that you’ll quickly absorb sugar and nutrients from your bloodstream and you’ll be fuelled with lots of energy. It also makes glycogenesis (fat storage) more likely.

Insulin is actually the single most ‘anabolic’ hormone in the body. That’s because it enhances the uptake of amino acids into the muscle and begins the process of protein synthesis. If your aim is to add muscle, then you need to be as responsive to insulin as possible. As mentioned though, insulin is also highly lipolytic, meaning that it transports glucose to the fat cells.

Insulin is also involved in a number of other processes too. For instance, insulin can impact on our mood – when it absorbs the sugar and nutrients in our blood it leaves behind tryptophan which the brain converts into serotonin. This is why we feel happy after we’ve eaten and become anxious when our blood sugar is low. 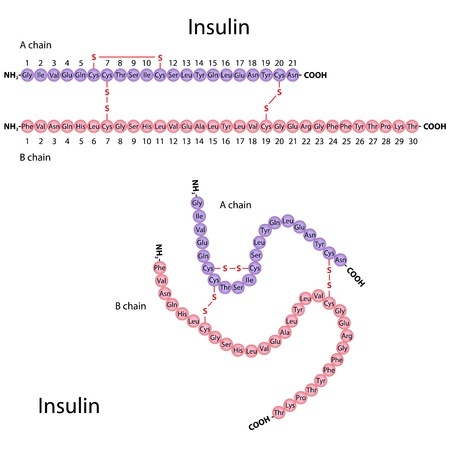 How to Reduce the Insulin Response

The simplest and easiest way to reduce/prevent the insulin response is to reduce the amount of sugar you are consuming. The aim here is to maintain a steady blood sugar level that doesn’t spike and thereby doesn’t trigger the release of insulin.

This is the main objective of low carb diets and ‘slow carb’ diets that both avoid ‘simple carbohydrates’ in the diet. Simple carbohydrates are things like white bread, cake, fruit and sugar which can be quickly absorbed by the body and which contain large amounts of sugar. These diets instead encourage you to consume saturated fats, complex carbohydrates and lots of fiber. These all provide energy as well but the energy is provided more gradually meaning that you burn it off as it gets released. There’s thus no sudden spike in blood sugar and no sudden rush of insulin – thereby preventing fat loss.

Is this method effective? It all depends on who you ask. Many studies show that a low carb diet can reduce the likelihood of obesity and aid in weight loss (1), critics however point out that such methods only distract from the real issue: the calorie surplus.

Various different training methods are also tied closely to the insulin response and blood sugar. ‘Fasted cardio’ for example is cardiovascular exercise performed in the morning before the individual has eaten anything. At this point their blood sugar is low and thus the body needs to get more of its energy from fat stores.

Likewise, HIIT (high intensity interval training) utilizes short periods of anaerobic training where the body requires energy too quickly for the aerobic (fat burning) energy system. The result is that the body is forced to burn up blood sugar and this then means that blood sugar is lower for a short time following the training – leading to more fat being burned throughout the day. HIIT is generally regarded as the most effective form of cardio training for fat loss.

If you want to improve your energy levels and if you want to enhance anabolism, then increasing your insulin sensitivity is the way to go. There are a number of ways you can potentially do this.

One method may be to reduce fructose. Some experts currently believe that fructose may be particularly responsible for causing insulin resistance and moreso than glucose (2). Many people are currently condemning all carbohydrates and accusing them of causing insulin resistance across the board. A more moderate approach would be to assume that no entire food group is ‘bad’ and that we should instead just be a little choosey and try not to overindulge.

But even cutting out fructose seems a little reactionary. After all, fruit juice and smoothies contain a lot of valuable nutrition. You can certainly stop adding corn syrup to everything though…

We know that eating too much sugar can lead to type 2 diabetes, which is essentially just extreme insulin resistance. It makes sense then that sugar in general (and perhaps fructose in particular) might reduce insulin sensitivity. The solution though isn’t to stop eating sugar entirely but just to reduce your consumption and try to keep it to healthy levels.

What is interesting here is the idea that reducing sugar can both prevent weight gain by reducing the insulin response and improve insulin resistance.

Trans fats may also inhibit glucose disposable and promote insulin resistance according to some research (3) while improving the balance of omega 3 to omega 6 and drinking green tea might help to enhance insulin sensitivity.

One interesting diet strategy that some bodybuilders use is something called ‘carb backloading’. This involves only eating carbohydrates after a workout in order to encourage anabolism and to encourage more calories to be used building muscle rather than being stored as fat. As with most of the more ‘extreme’ diet strategies like this, carb backloading has fans and detractors.

Understanding the Individual Differences and Putting This Knowledge Into Practice

Most of us can get by without thinking too much about insulin and it’s important not to make any changes to your diet that are too drastic. The body is made up of numerous highly interconnected systems and drastically altering one part of your diet can have knock-on effects across the board.

But here are some takeaways that you can put into action: