Bibasilar atelectasis is the partial or total collapse of the lungs, caused by the deflation of alveoli. Alveoli are the small air sacks in the lungs that aid with the absorption of oxygen into the bloodstream. Thus, any impairment in their function will result in a reduced intake of oxygen and associated lack of energy.

Bibasilar atelectasis largely affects the left and right sides of the lower lungs, though in some cases it may describe the complete collapse of the lung.

The main risk with atelectasis is difficulty breathing though there are a couple of other symptoms to be aware of, including rapid, shallow breathing and coughing. As a common complication of other conditions, it’s most likely to occur when you’re already in hospital. You should always seek emergency attention if you are experiencing any difficulty breathing.

Often bibasilar atelectasis will be a complication of another condition affecting the lungs, such as lung tumors, inhaled foreign objects, chest injuries, respiratory weakness or others.

Generally, the causes of atelectasis can be split into two categories: obstructive or nonobstructive. In the former case, the damage is caused by a blocked airway. In the latter, it is normally due to pressure or impact from outside. Common causes of obstructive atelectasis are mucus plugs, foreign bodies or blood clots. 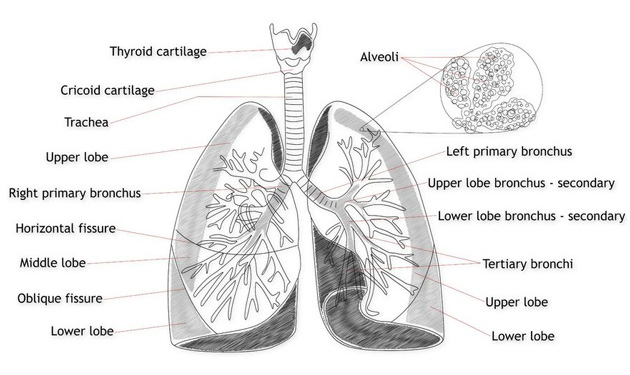 Treatment will depend on the severity of the condition. If only a small area has been affected, then no treatment may be necessary. In cases where an outside obstruction is the cause, then removing or shrinking that blockage will be a priority. Foradil is a medication that can help to expand the bronchial tubes, while Acetadote can be used to thin the mucus to help the body drain it.