Gel manicures utilize a type of nail polish that uses gel rather than the usual paint. This gel is in fact a liquid monomer and polymer powder and is then cured under UV lights. The result is a far more resilient finish that can’t easily be scratched or damaged and which dries in seconds.

This means women no longer have to worry about their nails being ruined the moment they leave the salon and means that their days of getting their husbands/boyfriends to carry their bags are over. 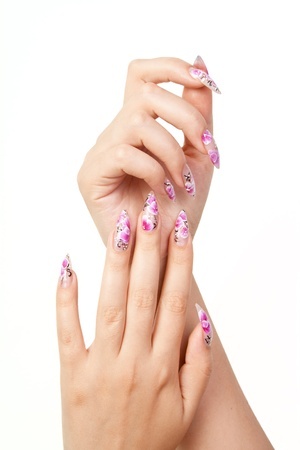 But gel nails might mean you need to worry about something else. Namely your health.

Numerous reports are now emerging that gel manicures could not only damage your nails but also lead to cancer. But is this really the case? Do you need to be careful? Should you avoid the treatment altogether? Let’s find out.

The first concern is for nail health. The worry is that gel nail polishes might prevent the nails from breathing and transferring oxygen, that they could damage the upper layer of the nail when removed and that they could expose you to harmful chemicals.

One of the biggest worries revolves around ‘peeling’ the gel as it starts to come away. This is a habit that many women are guilty of and as the gels are a lot harder, it’s worried that this could damage the surface of the nail making them weak and brittle. This could also cause the nail to get lifted, which would allow water and fluids to seep underneath and potentially lead to an infection.

“Through the use of these gels and acrylics, the light will actually cause the original nail plate to separate from the bed.” Dr. John Humeniuk told Fox Carolina “Now you have a gap where moisture or bacteria and yeast can grow. So this is actually the bigger problem.”

Another concern is the strong acetone that is used to remove the gel. What makes this worse is that some salons will also be somewhat rough when removing the gels. Not only do they use the acetones but they also scrub the nails using abrasives in order to quickly remove the polish. This can further the chance of an infection if the skin around the nail gets damaged and it can further weaken the remaining nail.

More alarming is the suggestion that gel manicures could be a risk factor for cancer.

More specifically, the concern surrounds the use of the UV light which cures the gel. These concerns followed a report published in the Archives of Dermatology that suggested that UV lamps could have played a small part in the development of skin cancer on the tops of two women’s hands.

As the media is wont to do, this was then blown out of all proportion resulting in mass hysteria. More recent – and less publicized reports – show that UV lamps are highly unlikely to pose any risk. This report (1) for example, showed that the UV-B output from UV nail lamps was so low as to be the equivalent of spending 17-26 extra seconds in the sunlight. Of course this is very unlikely to have a big impact and especially if you aren’t getting regular treatments.

One expert, Dr. Adigun says: “[Gel lamps] do not induce cancer nor do they cause premature aging like UV rays do.”

This is only one of the concerns regarding gel nails and cancer however. Another issue are potential carcinogens that are used in certain gel polishes. For instance, gels that contain butylated hydroxyanisol (BHA) might be a risk and the substance is described by the National Toxicology Program as ‘reasonably anticipated to be a human carcinogen’.

Other chemicals used in certain gel products that might have a minor cancer risk are dibutyl phthalate, toluene and formaldehyde.

But before you throw out all your gel varnishes, know that a) these substances aren’t in all products and that b) any risk is likely to be so minor as to be negligible. While it’s not nice to think about, there are countless carcinogens in our diets and in our natural surroundings and we come into contact with these every single day. It’s not practical or healthy to be too concerned with all of them – or you’d end up living in a bubble!

How to Be Safe

So should you stop getting gel manicures? Are they putting your health at risk?

Not really. Rather, as with all things, the lesson is that you should practice moderation. If you are going to the salon every other week to get a new gel manicure, then you are subjecting your nails to unnecessary stress and you may find that they start to become brittle and damaged as a result. If you want to ensure that your nails are as hard as… nails… then just be sure to leave a small gap in between visits so they have a chance to recover.

Most of us can’t afford to get gel manicures every week anyway and are more likely to use them only for special occasions like weddings or holidays.

Likewise, just be sure to keep an eye on your nails. If you notice them starting to look a little less shiny and strong, then just see that as a sign to take a break and let them recover.

You should also be careful when selecting a salon. Keep an eye on the hygiene practices and also watch the way they remove the polish. Try to avoid any businesses that use unnecessary scrubbing.

As for the cancer risk, there’s probably no reason to panic. But if you are worried, then both of the issues can easily be avoided: just look for gels that don’t contain the chemicals listed earlier and find a salon that uses LED lamps for curing rather than UV. Problem solved!