Viral sinus infections are generally not considered contagious but in some cases they may be and it is important to know the risks and act accordingly if you think you have the symptoms of such an infection.

For starters, let’s take a look at precisely what a sinus infection is. A sinus infection, also called ‘sinusitis’, is an inflammation of the tissues that line the sinuses. This is often caused when they become blocked by fluids, which in turn can cause bacteria or viruses to grow. Symptoms tend to include cold-like symptoms such as a running/stuffy nose and facial pain lasting 4 weeks or less. In acute cases, this can last longer.

Often we think of sinusitis as being part and parcel of getting a cold – and indeed this is the most common cause of a sinus infection as it causes the sinuses to become blocked with mucus and phlegm. About 37 million Americans will experience sinusitis once a year. Conditions like nasal polyps can make this more frequent.

Viral infections are those that cause colds and flus and will generally spread via small droplets of fluids in the air (after coughing, blowing your nose or sneezing) and through hand-to-hand contact. These are the highly contagious types of sinus infections and they spread particularly quickly among children in close proximity – such as at school. They also spread very quickly in offices, on trains and at gyms – anywhere that large groups of people congregate and air isn’t able to easily circulate.

If you have a sinus infection or cold, then you can take a number of precautions to try and avoid the spread of the condition.

Vaccines can also protect against colds and flus and this is recommended if you are elderly or if you cannot afford to get ill at a particular time. 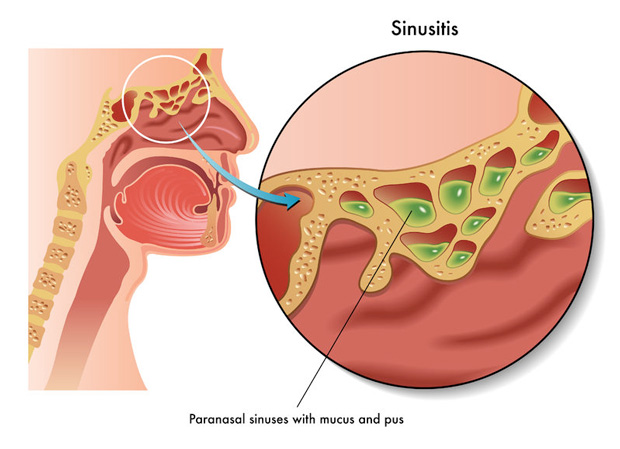 If you have a cold or are suffering from allergy symptoms, then drink lots of water to encourage decongestion. Carrying a nasal spray or oral decongestant can also prevent your sinuses from becoming blocked and infected. If you find yourself regularly suffering from sinusitis, then try to support your immune system with a healthy intake of vitamins and minerals and avoid triggers that cause allergic responses.