Do you find yourself drifting off from time to time? Do you struggle to pay attention during boring parts of work? Or at the end of the day as your working hours draw to an end?

Perhaps you struggle to listen to what certain people say to you? Maybe you find yourself staring into space when you’re supposed to be reading or paying attention.

If you recognize all these symptoms, then that’s enough to confirm a positive diagnosis of ‘being human’. These are problems that all of us experience from time to time and especially with today’s hectic pace. 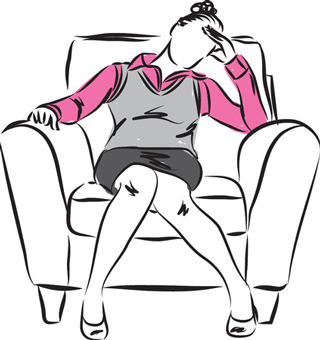 Common though these experiences may be however, this doesn’t make them any less troublesome when we’re trying to be productive or appear switched on and smart. And sometimes a tendency to fall half asleep can definitely get us into trouble. So how can you go about staying awake and alert? Let’s examine some options…

Remind Yourself Why it Matters

Have you ever been drinking on a night out and feeling drunk, only for something to suddenly go wrong? Maybe you suddenly notice that your friend has had a little too much fun and is now collapsed in a heap looking rather ill? Or maybe a group of unsavoury looking types is moving toward you?

In these scenarios, what you might find is that you suddenly and very quickly sober up and become a lot more switched on and alert. What causes this is a release of certain chemicals in your brain – those being adrenaline, norepinephrine, dopamine and cortisol. These are our ‘excitatory neurotransmitters’ and they kick in whenever we’re stressed or highly focussed.

And this is why you also don’t fall asleep at things you find interesting.

But chances are that if you’re here, doing that thing that is making you lose focus, then it must be at least somewhat important. And with that in mind, it shouldn’t be too much of a stretch to remind yourself of why that is and to make yourself more alert again! The key is simply making the connection between what you’re doing and what you want to achieve/avoid.

If that doesn’t do the trick, then another thing you can do is to try watching something inspiring on YouTube. When we watch videos of other people doing things, our brains understand this partially by visualizing us doing them. If you watch something active that you also find inspiring, then this can make it feel as though you’re engaging in that activity and trigger the release of similar neurotransmitters and impact your mood in a similar way. This is what’s known as ‘priming’.

Look, it might not be particularly revolutionary but it really does work! During the day, you get more and more groggy because of a substance called adenosine. This is a by-product of the energy process that your brain cells go through whenever you think, dream or do anything else that requires a bit of brain power. The more adenosine builds up, the more your brain starts to slow down.

The reason that caffeine is so effective at helping you to stay awake, is that it can mimic the appearance of adenosine and therefore block the receptors – preventing adenosine from having its normal effect. This results in a sudden increase in activity in the brain and that in turn triggers the release of numerous other excitatory neurotransmitters such as norepinephrine and dopamine.

It’s a somewhat ‘fake’ boost in mental energy but it sure does work!

Another way to quickly wake yourself up a bit is to exercise. When you exercise – even just jumping up and down for a minute – you will increase your heart rate and that will enable your body to deliver more energy to your muscles and your brain in the form of blood and oxygen. This will immediately give you a bit more fuel and help wake you up.

What’s more is that exercise will once again trigger a mild ‘fight or flight’ response via the release of adrenaline, testosterone, cortisol and testosterone.

Get Out in the Cold

If you’re tired and groggy in the morning, one of the best things you can do to wake up is to get yourself into a cold shower. This boosts testosterone as well as creating a surge in adrenaline – and it’s actually the adrenaline that causes your hairs to stand up slightly on end. You can also do something similar by just going for a brisk walk outside which will combine the cold with the exercise for a double effect! Yelling also causes a brief blast of adrenaline, so you could try this too while getting cold!

Look Into the Light

Bright light can help to wake us up as it stimulates the production of cortisol and reduces the sleep hormone melatonin. This is particularly true of ‘blue light’, which mimics the wavelength of the sun. This is actually one of the reasons that looking at your phone screen (which produced blue light) is such a bad idea right before bed – it will wake you up and prevent you from sleeping as well!

When you’re trying to wake yourself up though it can actually be a good thing. Try just turning up the brightness on your monitor a little and it may be enough to have a slight impact on your wakefulness. Failing that, just turn on the lights slightly in your office.

Finally, make sure that you understand your natural rhythms and how you are likely to be more awake at some points and more asleep at others.

Our mental state is very closely tied to our physical state. That’s why exercise or cold water can have such a big impact on your wakefulness.

Simply knowing this will allow you to better avoid trying to work at points when you’re going to be at your most tired. Instead, you can try and schedule your most ‘mindless’ work for this time. A good example would be something like answering emails. You can do this first thing in the morning or right after lunch. Likewise, if you know you have a big important meeting coming up later, you can avoid eating anything that will too drastically spike your blood sugar.