Healthy self-esteem is vital for a happy, successful life. Those with good self-esteem tend to remain longer in education, find it easier to form and maintain stable relationships, and progress further in their career. For those who lack self-esteem, however, life can be a painful struggle. Any therapist will tell you that many of society’s problems can be traced back to poor self-esteem, from drug abuse and alcoholism to divorce and crime. 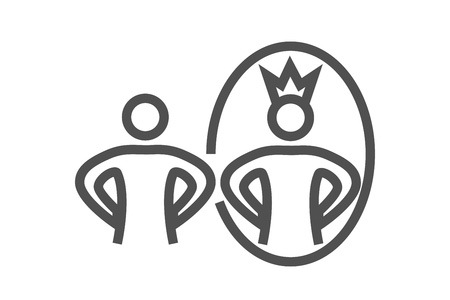 But what is self-esteem? Many people confuse self-esteem with arrogance and aggression. In fact, bullying, aggression, and boasting are often signs of low rather than high self-esteem. People who feel worthless tend to be either nervous, passive, and withdrawn, or they try and hide their feelings behind a mask of arrogance, confidence, and aggression.

Self-esteem can be reduced to two things: a sense of worthiness and a sense of competence. Of the two, the first is the deeper and more fundamental. Children who feel unwanted and unloved, for example, often grow up without this sense of worthiness. No one has welcomed them to the world and validated their existence. At a deep, subconscious level they may even doubt their right to exist. As adults, they often find relationships hard, not because they are unable to love but because they feel unworthy of being loved.

More generally, a sense of worthiness comes from living up to certain values. These values may be set by parents, family, religious leaders, or society itself. Whether you actually live up to these values is irrelevant, what matters is whether you believe you have. For example, a sensitive, effeminate male raised in a society that values macho toughness will probably feel a failure.

Those with healthy self-esteem also feel a sense of competence. In other words, they are sure they can cope with the basic challenges of life, from booking a flight to starting a new job. People with low self-esteem usually lack this confidence. Such individuals often form relationships with their opposite, allowing him or her to take complete control of their life, to manage the finances, choose the family vacation, and even decide how the children should be raised.

How to Improve Your Self-Esteem

Defining and understanding self-esteem is relatively easy. The difficulty arises when you try to improve it. But with a little time, effort, and determination, you may be surprised by the progress you make.

1) Recognize that you are not your thoughts. Many people live with a torturer inside their head. Some literally hear a voice telling them they are fat, useless, and pathetic, that no matter how hard they try they are bound to fail. The first step on the road to healthy self-esteem is to acknowledge that thoughts are not facts. Mindfulness instructors often use a sky metaphor to explain this. Imagine a clear blue sky. That, they will say, is your awareness (or consciousness). The clouds that pass through that sky are your thoughts. These clouds can be small, light, and fluffy, or they can be huge, heavy, and dark. But you are not those clouds. They arise and pass, arise and pass. You are the empty sky that remains.

2) Uncover core beliefs. Now imagine an iceberg. Only the tip is visible, the rest hidden beneath the sea. Your self-lacerating thoughts are like the exposed tip of that iceberg. They rest on something hidden, on deep, subconscious beliefs about yourself. These so-called “core beliefs” were often laid down in childhood or adolescence, sinking so deep that you may be unaware of them. Buy yourself a notebook. For a couple of weeks, write down every negative, self-loathing, self-critical thought that passes through your mind. Now, go back through them and identify recurring patterns. Try to see the core beliefs that are generating them.

3) Challenge those beliefs. Never forget that the brain is “plastic”, meaning that it literally rewires itself as new circumstances arise and new thoughts are practiced. A hypothetical case may bring this technique to life. A 50-year-old solicitor visits a therapist. All her life she has lived in fear of rejection and is convinced no one likes her. As they talk, the therapist discovers that her family moved when she was 12-years-old and she had to go to a new school. For the first year or so no one spoke to her. She was given a hurtful nickname and shunned by the other children. Gradually, things improved and this period of her life was forgotten. But the damage was done. That sense of rejection, of being unlikeable and unwanted, never left her. Instead, the damaging beliefs that she is unlikeable and will be rejected by new people sank deep into her subconscious where they continue to cause her trouble. The therapist encourages her to challenge those beliefs. They try to understand why she was rejected. It dawns on her that they rejected her not because she was stupid and boring but because she came from the big city and had a different accent. The other children were simply intimidated and confused by the way she dressed and spoke.

4) Be kinder to yourself. Everyone is disliked by somebody, if only for being perfect! And even the finest human beings are occasionally selfish, cowardly, thoughtless, and weak. Be aware of your language. Notice when it is extreme. Do you often start sentences with “I always,” or “I never?” People will often say to themselves “God, I never succeed. Why do I always make a fool of myself?” Do you make rigid demands, saying things like “I have to” or “I must?” Change your language and you will change your thoughts.

5) Accept failure as a part of life. No one ever passed through their life without failing. Ask any wealthy businessman or sports star about their past and most will tell stories of bankruptcy and evictions, of broken ankles and missed goals. Failure is not the problem. On the contrary, approached in the right spirit, failure has much to teach. Most successful people would not be where they are without it. Failure will only damage your self-esteem if you allow it to. You can choose how to interpret events. Those with poor self-esteem take every little mistake or failure as confirmation of their worthlessness and incompetence.

Most people who struggle with self-esteem are their own worst enemy. You will not begin to heal until you recognize that you are worth the time and effort. First, you must understand the nature of the problem. Once you have grasped just what self-esteem is, you can begin to improve it. The key is persistence and determination.