Online dating is a legitimate way to meet someone, but you have to go about it in a smart and mature way. Playing games with men online will not lead to a serious and long-term relationship. The following are four surefire ways to be taken more seriously online… 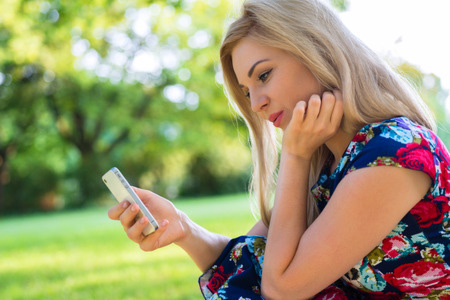 Don’t give attention to bad behaviour

If you’ve been talking to a man via text for a while and he suddenly starts running hot and cold or disappears for days at a time, it’s important that you don’t make him believe that this is the sort of behaviour you put up with. If he disappears for days, you should move on and find someone who doesn’t constantly disappear with the expectation he can come back whenever the mood hits. When online dating, it’s important that you set and maintain boundaries. You show people how to treat you online and offline.

If you choose to share naked photos or become involved in sexting, it’s a good idea to wait until you know a man for a while. By beginning this kind of communication too early you may find that getting to know each other begins to take a backseat. If you want a real life relationship and not just an online one, sexting and sharing intimate photos may be something you wait for until you’ve met in person and see how things go.

When online dating, you’re going see a picture of someone you hope is who you’re actually talking to. It’s natural to want to trust the person you’re interested in and believe it’s him, but that’s not enough. Online dating is more than just emails and texts. At some point, you’ll want to begin sharing photos and maybe even video chatting. If the man you are talking to makes up excuses as to why he can’t take pictures or video, you need to cut him loose. If you accept his excuses and continue on with the relationship, you need to okay with the fact that when you meet, he’ll probably look very different than the one photo he sent in the beginning. No one wants to believe they’ll be lied to, but someone who is telling the truth has no reason to hide.

Don’t lie about who you are

If you’re going to be successful when online dating, you need to be honest about who you are. Don’t lie about an insecurity in hopes that admitting the truth later won’t be a big deal. No matter how much someone might like you, finding out you lied about something or omitted an important detail will be a shock that has the potential to ruin your relationship. Always be honest about who you are and the right person will stick around. You don’t want to get a reputation for being a liar. Online dating will introduce you to lots of new people. Some may turn into friends who could introduce you to lots of potential dates.

Online dating is a popular way to meet someone and it can have successful results if you go about it the right way. The important thing to remember is that just because it’s online doesn’t mean you can’t have standards.

April Aragam is a freelance writer from Vancouver. Her article topics vary as she has a wide variety of interests that include, but are not limited to: writing, money/finance, children/parenting, teenagers, relationships/dating, money/finances, and women's issues. She has written for publications such as Fellowscript, The New Writer, Island Family Magazine, Calgary's Child, Baltimore's Child, Vervegirl, Listen Magazine, and The Willamette Writer.

April Aragam is a freelance writer from Vancouver. Her article topics vary as she has a wide variety of interests that include, but are not limited to: writing, money/finance, children/parenting, teenagers, relationships/dating, money/finances, and women's issues. She has written for publications such as Fellowscript, The New Writer, Island Family Magazine, Calgary's Child, Baltimore's Child, Vervegirl, Listen Magazine, and The Willamette Writer.