Ecstasy and MDMA are recreational drugs that are popular among ‘ravers’ and commonly used with the aim of having a ‘synergistic effect’ with sound and light shows. Despite their popularity however, these are serious drugs and open to abuse and addiction, often with serious side effects.

MDMA is an acronym for ‘methylenedioxymethamphetamine’ and is a type of stimulant. The term ‘ecstasy’ is often used to refer to the street version of the drug which is often considerably less pure and cut with various other substances that might have more severe side effects and prove more addictive. 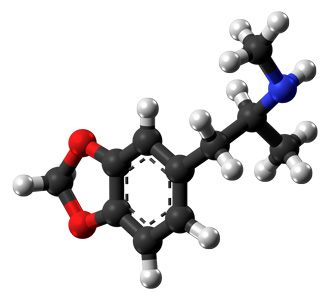 MDMA works by triggering the brain to release serotonin stored in the neurons in ‘neurovesicles’. Normally, neurotransmitters like serotonin are kept in these ‘sacks’ and then only released when they are needed in the brain based on the mental activity that you’re engaging in. However, when a user consumes MDMA all this serotonin is released instantaneously resulting in an instant ‘high’. Seeing as serotonin is a feel good neurotransmitter that is associated with positive emotions, euphoria and pain relief, this can then cause the user to experience intense feelings of wellness and positivity. Meanwhile, dopamine and norepinephrine are also released which have the effects of increasing focus and energy as well as heightening the senses.

For ‘ravers’ this all has the desirable effect of making the music seem more intense, of creating feelings of togetherness with others and of increasing their energy and mood. The effects can last for a few hours but after this more negative symptoms will show up.

Side Effects of MDMA and Ecstasy

While the increase in energy, focus and mood might all be considered desirable for users, these effects are followed by longer periods during which they experience the precise opposite feelings. This is due to all of the brain’s serotonin reserves being depleted which then leaves patients feeling depressive, tired and irritable. They may also experience confusion, difficulty sleeping and poor reasoning and logic which can last from several days to several weeks. Essentially users are experiencing a few hours of being ‘high’ in exchange for a multiple-day hangover.

More serious is the risk that users might end up taking other drugs if they use impure forms of MDMA, that MDMA could act as a ‘gateway drug’ to the use of other substances, or that they may suffer an overdose.

There is some debate surrounding the addictiveness of MDMA and ecstasy with some believing that physical addiction is not an issue with this particular drug. This is because it doesn’t seem to have the same tendency to lead to tolerance and dependence as do other drugs like cocaine or heroin. In other words, because the use of MDMA only results in the release of serotonin, dopamine and norepinephrine already in the brain, it may not lead to the same amount of adaptation – such as reductions in the number of receptors for those neurotransmitters.

Nevertheless, many people still report withdrawal symptoms (about 60% of users) including fatigue, loss of appetite, poor concentration and depression (2). These are the same symptoms that immediately follow MDMA use and that occur as a result of serotonin depletion. This may in fact be what they’re experiencing then rather than withdrawal effects proper, but these effects in themselves might still make it difficult for users to resist taking more MDMA in order to feel ‘normal’ again.

At the same time, MDMA is also psychologically addictive meaning that people can become dependent on the effects owing to their psychology. Many people for example will ‘self-medicate’ for depression or anxiety using MDMA and can then start to use it as a ‘crutch’ thus depending on it to deal with difficult emotions and stressful situations.

Ultimately, this is a very dangerous substance despite claims by some that it is less addictive or destructive. It must be taken seriously and should be avoided at all costs.