Anger can have many devastating impacts in the workplace. This subject may even evoke the thought of shootings in workplace with tragic casualties. Such incidents often bear the highest prices, in terms of psychological trauma, financial losses, loss of productivity and lingering confusion. Anger can turn into the most costly and the most extreme manifestation: violence.

Non-violent anger can still be costly, many workers have cold, festering anger due to unfavorable corporate policies, which can turn to outbursts, such as strike or riot. Anger in the workplace can be expressed directly or indirectly, and some angers may not be expressed at all. Angers can cause hurt feelings, disruptive interactions and mental preoccupation. Other more subtle costs of anger can be more personal such as diminished career prospects and poor health. Workgroup damages caused by anger are lost of innovation, wasted time, increased turnover and absenteeism. While calculating monetary value of indirect and direct costs of anger is difficult, it is possible to enumerate most common impacts of poorly controlled anger. 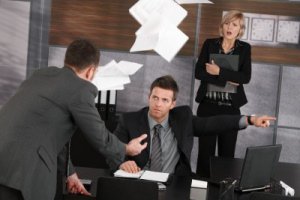 It was commonly believed that venting anger was a better solution than holding it in. However, recent researches show that people can get many negative effects when they vent their anger freely. In the individual cases, anger causes strong physical and emotional responses, which result in impaired physical and cognitive functioning. Badly managed health can be damaging to your career and if your anger is especially chronic, there could be long-term implications on your health.

These are the specifics:

• Muscle in the arms, back and chest may tense up

• Co-workers carry open or secret grudges against you

• You have a reputation of losing temper easily

• You have a reputation of being abusive

• You have a reputation of being incompetent under pressure

• You can become a target of revenge, in both legal and illegal forms

• People don’t want to talk or work with you

• You’re prevented to participate from high-priority and critical projects

• Vendors, customers and clients tend to avoid you

• Gastrointestinal tract illnesses, such as gastritis

Additionally, anger may cause serious emotional disorders and in some cases suicide. Anger can cost organizations and work group immensely. The target can suffer considerably and those who are nearby can eventually become targets as well. Organizations or companies will not suffer from lower commitment and efforts, but can also be affected by significant financial and legal consequences.

Those who are on the receiving end of emotional storm can experience physical and emotional effects similar to those felt by the angered person. Common emotional responses felt by targets are sadness, fear, thought of revenge and increased caution. In some cases, the target can have more powerful anger than the angered individual. This may cause immediate retaliatory responses, both verbally and physically.

Often a superior’s anger can cascade down to the lowest rung of the organization. However, anger can also spread upward and in this case, it is usually covert in nature, for example it can take form as attempt to undermine others’ goals, failure to communicate or failure to cooperate.

Often when we talk about anger, we only cover about its negative effects. Anger is often considered as a forbidden emotion and angry people are often believed to be “out of control” or “irrational”; among the worst things that can happen to a person. It is especially true on companies, where employees are expected to leave their emotions outside the office doors. What we often forget is, anger is actually a neutral energy, it is neither negative nor positive. With proper control, anger can actually lead us to a productive and fulfilling life.

We can more easily distinguish positive responses to anger when we can extricate ourselves from conflict and uncontrolled anger. In general, to get the most of anger, we should see ourselves as an emotionless observer. When we consider a typical anger scenario and imagine likely responses, we can see that conflicts can potentially be converted to creative energy. Anger and conflict are evidences that workgroup and individuals are committed to their goals, as conflict can motivate people to produce better results. That’s why some researches indicate that conflict in a project can actually encourage better outcomes, although in some cases, it is intense enough to cause anger. But as long as members of the team are completely focused and control their emotion, the result is often satisfactory.

Positive anger emotions are often focused on the work itself, instead of to one or more member of the workgroup. These are how anger can improve productivity:

• It channels energy to fuel intensive works for many hours

• It leads people to persevere when facing difficult goals

• It encourages people to become more innovative and creative

• It encourages debate among competing ideas, which can results in better results

• It encourages competition among group members that drives quality

• It provides important data on whether current conditions, behaviors, relationships, practices and policies are both effective and efficient

• It leads to fruitful discussions, actions and resolutions

• It motivates people to deal with competitors in the same industry

• It motivates people to face wrongdoers

• It draws attention to perceived injustice

Of course, angers are not focused solely to work environment, even if it is a great breeding ground for anger. Although most work-related anger tends to degenerate into interpersonal conflicts, anger can be very valuable asset when effectively handled. Organizations that are vulnerable to work-related anger should perform regular brainstorming sessions to manage anger.