The Lumie Starter 30 is an alarm that has been designed to wake the user with a gradually increasing light that mimics the appearance of the rising sun and provides the right spectrum of light to increase energy levels, mood and performance. This promises to be a useful tool for anyone who struggles to wake up in the morning, who feels low during winter or who suffers from SAD. 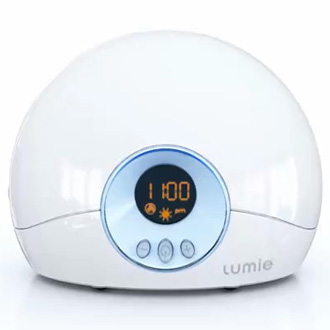 SAD stands for ‘Seasonal Affective Disorder’ and is a condition characterized by feelings of lethargy, tiredness and depression that are most severe or only present during the winter months. This is an affliction experienced mainly by those in countries with cold, wet winters and appears to be related to the length of the days as well as the weather generally.

Even if you don’t suffer from SAD though, there’s a chance that you might be more sluggish and less productive in the winter months and many people find that their energy levels and output goes through the roof if they move to sunnier climates.

The important thing to remember here is that our bodies are regulated in many ways by external cues such as the light and weather. The blue light waves that come from the sun stimulate the production of hormones like cortisol – in this case a positive things – and diminish those like melatonin and GABA to make us feel bright and alert. This in turn regulates our natural body clock but also our activity levels throughout the year. Many non-tropical animals will reduce their activity during winter months which is a survival trait that helps them to conserve energy and avoid predation during darker hours. Hibernation occurs in extreme cases but even animals that do not hibernate will spend less time foraging and move more slowly. It is possible that humans also have mechanisms in place to discourage activity during these periods and this can lead to reduced productivity and energy in winter and possibly even SAD.

How the Lumie Starter 30 Works

The basic idea of the Lumie Starter 30 is to wake you up with a light that gradually gets brighter and mimics the effects of a sunrise. At the same time, the light is brighter and ‘more blue’ than your average bedside lamp and should be enough to mimic the effects of the sun on the brain. As far as your body is aware, you have been woken up naturally by the sunrise and this then makes you feel more alert and improves your mood. The sunrise will begin 15-30 minutes before you need to be awake and once the light is at its brightest, the alarm will sound.

There is also a ‘sunset’ feature which has the opposite effect of gradually getting darker and moving from blue to orange light. This is a great way of telling your body that it’s time for bed and gradually stimulating the production of melatonin. If you like to read in bed, you’ll get about 20 minutes of reading before it starts to get too dark and you start to feel ready for sleep. This would also work very nicely as a nightlight for children.

The Lumie Starter 30 looks like a nice product and although the plastic construction doesn’t seem the most premium, it does look stylish on your bedside table thanks to a dome-shaped aesthetic and the way it casts light out in beams like a painting of a sunrise. There are more premium products out there but the Starter 30 is one of the cheaper options so you’re getting what you pay for in this regard.

The device also has a very minimalist input which keeps it from looking cluttered with buttons. In a very nice touch, the LED display will turn off while you sleep meaning that you aren’t disturbed by bright numbers – which would somewhat defeat the object.

The big question though is whether or not the device works, and from my experience I can say that it does seem to do its job for the most part. Unfortunately, I will often sleep through the brightening light and not wake up until the actual alarm sounds but even this is a considerable improvement over previous alarms. Why? Because I’m not startled awake out of deep sleep by a loud buzzing but rather gradually brought out of deep sleep only then to be woken when I’m close anyway (I know this because I’m tracking my sleep and my results with the Jawbone UP). And it’s much nicer waking up to a bright room that makes you feel alive versus a dark room followed by unnatural feeling light.

On two occasions though (I’ve been testing it for a week) I have been woken completely naturally by the light alone. And both of these times it felt great. In both instances I felt as though I had been asleep much longer and in fact worried at first that I had overslept. I also remembered many more of my dreams (useful for people interested in dream recall and lucid dreaming) and generally was much more rested and much more awake as a result.

Has it improved my energy and mood throughout the rest of the day? It’s hard to say – though I will say I’ve been feeling good lately and there’s a fair chance that some of that can be attributed to this new toy.

And as a personal aside, I’m also currently really enjoying the sunset feature. My fiancé has a tendency to like leaving the light on for a bit while we doze off and the danger has always been falling asleep and leaving it on. With the sunset effect it doesn’t matter when that happens and actually it feels like it eases you into sleep quite nicely!

That said, the device isn’t perfect. For starters, the actual alarm sound is very piercing and annoying and you’d think that a device of this nature would have the capability to wake you with the sound of birds or something. Some competing models have this functionality as well as the option to be woken by the radio.

The device is also lacking a ‘snooze function’ which is perhaps deliberate but seems like something of an oversight as this could be useful for some instances.

But perhaps most irritating of all is the difficulty in navigating the controls with just the three buttons. This takes a lot of figuring out and even when you know how to work it it can be slow and is a big hassle just to change the time or the alarm time.

Overall, I would highly recommend a device like this. I tried the Lumie Starter 30 and was generally impressed. For me, the lack of a nicer alarm sound or snooze button wasn’t too much of a drawback. That said, if you have the money you might want to look into one of the more premium models from Lumie or one of their competitors as those extra features could make a big difference.