Paranoia is a highly disruptive and damaging feeling/thought process that can lead us to lose our trust in our fellow man, to struggle to relax or feel safe, and to push those we love away from us and build up an ivory tower where we think we will be safe.

There are countless stories of individuals such as Howard Hughes who over time became so paranoid that he shut himself away and started engaging in more and more eccentric behaviors. Fear and suspicion to some extent is perfectly normal, but when this is allowed to spiral out of control it can lead to exaggerated and unfounded fears and even to personality disorders and full blown psychological disorders and delusions. 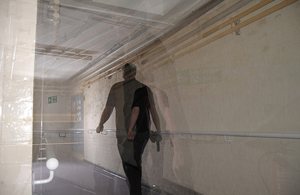 Technically in fact the main symptom of paranoia is permanent delusion. This is similar to schizophrenia but whereas a schizophrenic individual will likely have changing and disorganized fears, the concerns of a paranoid individual are persistent.

The symptoms of this delusion will normally set in gradually over time. The individual will begin to become more irritable, suspicious, introverted, depressed and jealous over time and this will begin to be more noticeable to their peers. The DSM-IV (Diagnostic and Statistical Manual) is the current reference used by professionals to diagnose and categorize psychological and personality disorders. Here paranoia is described as having the following symptoms:

There are also a number of different forms of paranoia. These are:

Persecutory Paranoia: The belief that all around them are enemies bent on harming or even killing them.

Delusions of Grandeur: The belief that they are highly important or powerful individuals (some individuals with delusions of grandeur will believe themselves to be God eve). This often goes hand in hand with persecutory paranoia where the individual believes that their power is the reason they are being plotted against and the reason only they can see it.

Religious Paranoia: Delusions of a religious nature – the belief that they are a messenger from God for instance, or that the world is ending.

Reformatory Paranoia: The belief that the individual is a reformer/curator and that all around them is suffering from a disease or lack of understanding.

Litigious Paranoia: This causes people to file cases against people they believe to have wronged them legally.

Hypochondrical Paranoia: The belief that they are suffering from one or several diseases, often taking multiple trips to the doctor for second opinions.

The Causes of Paranoia

Often paranoia will be associated with other psychological conditions such as schizophrenia which is characterized as the disintegration of thought processes. Both schizophrenia and paranoia on its own have been shown to have a hereditary link and in studies of monozygotic (genetically near-identical) twins it was found that 40% of cases occurred in both siblings. The risk of developing schizophrenia if you have a first-degree relative such as a parent with the condition is around 6.5% though it is difficult to separate genetic and environmental factors.

Similarly the use of drugs such as cannabis and even alcohol has been shown to increase rates of psychosis including paranoia and schizophrenia, however it is difficult to establish whether the link is necessarily causal. It has been suggested that perhaps the biological causes are linked to the brain ‘misinterpreting’ the misfiring of dopaminergic neurons. A link to dopamine has been supported by the finding that amphetamines – which trigger the release of dopamine – can increase schizophrenic symptoms. However with any biological correlation it is difficult to say with certainty whether the function of the brain causes our thought processes, or whether our thought processes cause the biological conditions.

Sigmund Freud originally described paranoia as being an expression of repressed homosexuality. While some circumstantial evidence collected by Freud and colleagues have demonstrated this to be a successful interpretation it fails to explain a large proportion of cases (and probably the majority). There is more support today for paranoia being linked to general insecurity – that an individual believes others are judging them or plotting against them because they themselves are judging. If you suspect then that you are not valuable as a person, then you will be more likely to read malice into other people’s actions and this can then spiral out of control.

At the same time, many psychologists today subscribe to cognitive behavioral explanations more than they do psychodynamic ones, and thus it is the breaking down of the thought processes over time which is examined. The belief is that over time the patient gets into a habit of interpreting events and actions as being negative rather than positive. We try to make sense of events but do so with a cognitive bias wherein they tend to see only the more negative explanations. This can begin as a result of bad life experiences or the aforementioned insecurity, but then become habit. And each time you come up with a negative explanation you will be further reinforcing this behavior.

A cognitive behavioral therapist then will attempt to treat a patient by getting them to listen to the content of their own thoughts and to acknowledge how they might be destructive or negative, and then get them to work on replacing these with more positive affirmations and interpretations.

Certain life events and situations can make this kind of paranoia more likely to develop, or at least make you more likely to become suspicious and critical. For instance stress and major life changes have been shown to cause people to act more paranoid, especially if these life changes create isolation for the individual such as loss of work or the breakup of a relationship. General anxiety and depression have also been shown to sometimes develop into paranoia as they cause us to over-estimate threat and risk.

Finally circumstantial evidence suggests that being suddenly elevated to a position of power or wealth can also cause paranoia as is the case with some major celebrities and historical figures. This sudden elevation of status can of course create delusions of grandeur, while at the same time creating a lot of changes in a person’s life that might make them question their reality. Winning or earning a lot of money then finally would also give the individuals around them a perceived ‘motive’ – a reason to be plotting against them. This foundation for mistrust, followed by a few unfortunate events, can then be enough to create a cognitive bias and a preset ‘pattern’ for how they believe future relationships will unfold – and that can develop into a more imaginative delusional paranoia.

Due to the very nature of how cognitive disorders work, recognizing a problem early on is one of the best ways to start to force yourself to think in a more rational way and to overcome the problem.