If you asked people what emotion they think they could do without, then it would be no surprise if a large number of individuals named stress as their least favorite.

Stress is a highly unpleasant and even debilitating emotion that can make us feel like things are getting too much for us, like the world is stacking up against us, and like we can’t cope. Stress is known to lower the immune system making us more likely to become ill, it has been known to negatively affect our decision making abilities so that we make bad judgment calls, and it is linked with many other unpleasant emotions such as depression and anxiety. When we are in a situation where we are placed under pressure and need to concentrate, then this is often when stress arises and it is of course in these scenarios more destructive than it is helpful, leaving us unable to concentrate and causing us to stutter and choke. 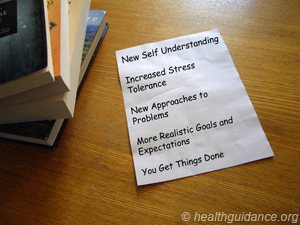 However every emotion exists for a reason and of course we adapted to feel stress through evolution, so of course it must offer some kind of benefit – and indeed it is not without its positive points. In fact sometimes focusing on the positive aspects of stress can be enough to help us turn stress around and to make the most of it. Here we will look at what some of the positive effects of stress are so that we can maybe start to work with it on occasion instead of constantly working against it.

First and foremost, stress is positive in that it can be a great motivating force at times and this is partly probably why we developed stress in the first place. In fact it’s often easy to see how stress can be a useful motivating factor by looking at every day examples. You may remember for instance being at school and revising for exams. Here some people will have revised very hard and started very early – and this was an important as a good way to prepare for any exam. Other people however will have waited until the last night and then crammed as quickly as possible to learn it all in a night – or they may even have decided to skip this phase and to just hope that they remembered enough from classes. Of course the people who revised harder and longer were the ones who would have performed better in the exams and it was of course this group who were the more effected by stress. If you’re stressed then you go about trying to rectify the problem, and you go about trying to prepare/plan/fix.

Of course this is a very good example of how stress is good but only in small doses – because you may also remember those students from school who were forced to work in separate rooms because they experienced too much stress. They may have been prone to panic attacks, or may have just broken down crying when they were expected to work in the main hall. This stress is crippling and that is enough to make us effectively useless in a range of circumstances. The trick then is to be able to control, monitor and ultimately harness stress so that you feel only positive amounts and are able to benefit from this rather than suffering for it.

Psychologist Hans Seley is often called the ‘Father of Stress’ due to his extensive research into the topic. He called these smaller amounts of positive stress ‘eustress’.

The people who felt that eustress may also have experienced more success in their exams for other reasons too – because the stress might have actually improved some aspects of their intelligence. Incredible though it may sound, stress is actually a cognitive enhancer which can boost several aspects of our mental prowess and so help us in professional and academic capacities.

First of all this is because stress helps our brain to focus. Stress developed to help us to react to potential dangerous situations in the wild – and this might mean for instance trying to escape from a predator. That’s not going to be any good if you are spending the whole time thinking about what you’re having for dinner that night, and so stress can help you to narrow your attention and to focus on the task in hand. Meanwhile stress has also been shown in some studies to help increase memory and recall – so a little stress while revising for an exam or a presentation can help you to remember what it is you’ve read on the big night. This is supposed to be a result of slightly higher levels of cortisone – though again moderation is key as levels of cortisone that are too high have been shown to cause damage to the hippocampus.

As well as improving your brain function, stress can also increase your physical performance and endurance. This is because it causes the release of adrenaline which speeds up your heart rate and so your metabolism. This can then result in increased reactions and reflexes, while also acting as a painkiller meaning that you can have better endurance. This may have once helped us to run for longer when being chances, but today it might help us in a physical confrontation, or during a sporting event. A bit of stress for an athlete then is a great thing. Adrenaline can also help to fight tiredness and fatigue.

This also shows another distinction between good stress and bad stress however – and that is that ‘good’ stress should be acute and not something that exists over a prolonged period. This is because an increased heart rate and lack of tiredness or pain might increase your endurance over short amounts of time, but over a long period of time the stress to the body can be too great and damage your immune system/cause heart problems.

How to Harness Stress

This is all very good and well, but it doesn’t distract from the fact that in an interview or before giving a speech stress can be enough to turn you into a nervous wreck and have you shaking and stuttering and unable to perform optimally. The trick then is in these situations to try and harness that nervous energy and to direct it into something a little more positive and effective. One way to do this is to try and ‘gee’ yourself up in order to make sure that when you have a ‘fight or flight’ response you are more suited to the former rather than the latter. Try listening to some up-beat and positive music, use positive affirmations, or try doing a bit of a workout. This will help to psych you up and rather than trying to suppress the stress you can instead embrace it and use it to motivate you to success.

In some cases though you will want to control stress – particularly when it starts to become unhealthy. As mentioned stress that lasts for very prolonged periods can begin to take a serious toll on your immune system and on your heart and this can cause you to get ill and put you at risk of high blood pressure and other problems.

In these scenarios you need to address your stress and that means finding ways to bring it under control both as it arises and over time. If you are suffering chronic stress then seeing a therapist, or trying to address the causes of your stress is important. Meanwhile for short term stress, you may want to try meditation or other relaxation techniques to try and bring your pulse back under control.

When we think of stressful events we tend to think of examples such as exams in our youth, and now perhaps things like interviews or speeches. This is partly why we think of stress as entirely a bad thing. However in the right circumstances stress can be perceived as the ‘spice of life’ and can be what creates challenge, suspense and excitement. For instance some of the most important and happiest moments of your life were probably also very stressful – your first day at work, your marriage, your first child (and any subsequent children), going traveling, moving home… all of them were highly stressful but this was just because they represented exciting positive life changes. A complete lack of stress in your life might suggest that you haven’t had any such major changes in your life and that might suggest likewise that you are not challenged in your life and not moving forward.