Having rumors spread about you is something that no one enjoys. This occurs when a fallacy begins about you that starts to gain momentum, and might be the result of a simple misunderstanding, someone jumping to conclusions or even a vindictive attack by someone.

These rumors can sometimes be damaging, and even if they aren’t then it can be hurtful and unsettling knowing that people are talking about you behind your back. Here then we’ll look at how to stop rumors and to prevent them from spreading to avoid possible damage and so you can take control of your own reputation.

There are many things that can start rumors as we’ve already touched upon. Sometimes they can be malicious, sometimes they might be accidental and innocent, and other times still they might be intended maliciously as an attack, or strategically in order to damage your reputation so that someone else can achieve their own ends – for instance in a work place someone might try to spread rumors about you with the hopes that it might help them to improve their chances of promotion or a raise. 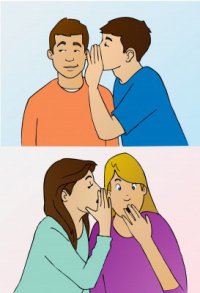 To an extent the purpose behind the rumors will affect how you go about dealing with them, but generally the same rules apply. Here we will look at some ways you can address rumors and limit the amount of damage they can do.

How to Stop Rumors

One of the worst things you can do, but nevertheless an understandably tempting response, is to join in the rumor spreading and the speculation. You might attempt to ‘lash out’ or get even by attacking someone else and spreading rumors about them in retaliation, but in the long run this will only serve to further damage your reputation and mean that more people want to spread rumors about you. It will seem more like ‘fair game’ and you will have provoked and encouraged them to respond again in kind. In this case, fighting fire with fire will not work. On the other hand by rising above it you will make yourself look as though you don’t care – which will already shed doubt on the rumors, and you will make the people spreading the rumors appear petty. Further all it’s just not any fun for people who are clearly goading for a reaction.

Likewise don’t get angry. The more bothered you appear by the rumors the more you will support them and make people believe they’re true. What you need to do instead is to simply remain calm and as though you are not bothered by the rumors and this will mean people start to question their truthfulness.

Address it Head On

In some cases there may be an element of truth to the rumor – it’s just that it has snowballed and grown out of control to the point where it is no longer representative of reality. To prevent this fate from becoming a reality, you need to tackle the problem head on, and admit to the elements that are true. This might seem like a bad idea, but at least this way you can tell the story in your words and you can avoid it getting blown out of all proportion. At the same time, the fact that you came clean with this information will mean that you appear more honest and so the assumption will be that you would be more likely to be honest about other aspects.

You shouldn’t argue with a rumor because that means acknowledging it and not remaining calm. However actions here certainly speak louder than words and if there’s any way you can disprove the rumor with your actions then you should do so. For instance if the rumor is that you still live with your mother, simply invite people around for a party at your place. The great thing about actually disproving the rumor is that you will make the person who started the rumor appear untrustworthy and foolish.

While you shouldn’t question the actual rumor, you can shed doubt on its source and on their motives. If the rumor seems to come from their own insecurities then just demonstrate these insecurities with your actions (remember actions speed louder than words – ‘Jeff how about you come up here and talk about what makes a good work colleague?’), or just make sure people realize that there is bad blood that might be coloring the truth.

Machiavelli said that it is best to be loved and feared, but that if you could only choose one you should be feared. This is particularly important if you are in a leadership role, so if you know who’s responsible for starting the rumor then make an example somehow in a way that doesn’t acknowledge the rumor, but where everyone knows the real reasons behind your actions. This sends a simple message – that you’re not to be messed with and you are to be taken seriously.

Beat Them to the Punch

If you know a rumor is spreading then you need to launch your own campaign to counteract the rumor by talking to people before they hear the rumor. Speak with people in such a way that you disprove the rumor before they even hear it, that they sympathize with you, that they have no respect for the person spreading it, or whatever else will dampen the power of those lies. For instance if there is a rumor going around that you are cheating on your partner, then speak to them before about how much you love your partner, or about how your partner is cheating on you or whatever else you can to get them on side.