Moving in with someone is perhaps the biggest test of friendship there is (and the biggest test of a romantic relationship too). While someone might be your best friend in the whole world regularly, when you move in with them, suddenly you are exposed to all of their irritating habits in a big way, you have no way to get away from them, and you end up squabbling over little things that normally wouldn’t bother you that much. This is a real shame as it can sometimes mean that lifelong friendships go down the pan or are at least diminished as you find yourself cursing and pulling your hair out every time you find that they’ve left a bowl full of washing up for you, or left skid marks in the toilet, or left a half eaten apple in the living room.

Ultimately while this is very frustrating, it is still petty and in the grand scheme of things it really doesn’t matter. Your friendship is of course much more important and you need to make sure that you don’t let these things ruin that. The question is, how can you put it aside when it’s so irritating and when it makes so much work for you? 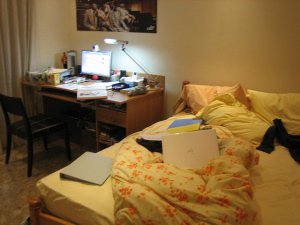 First of all, remember that no one is purposefully messy and that they aren’t doing this deliberately to upset you. This is a misunderstanding plain and simple and you just have different ways of living. While you might think that you’re living with the world’s messiest person, there’s actually a fair chance that they perceive you to be the messy one – it’s just that you have different priorities when it comes to cleaning. Before you start having a go at them for leaving the dishes out, or for never vacuuming, then first you should make sure that you aren’t dropping the ball anywhere – be sure to leave everything clean behind you that you can, and to think about what your cleaning habits might look like to a third party.

Bearing all this in mind, sometimes it’s worth not making a big fuss about things like unwashed plates or dropped crumbs, and instead to tidy up and not feel resentful for it. Consider it a favor that you’re doing for your friend, and something you’re doing for yourself as well. Surely you like your housemate enough to spend an extra 20 minutes a day washing up? Really it’s not a big deal in the grand scheme of things.

That said if you find that your roommate is consistently making a mess of all the good work you’re doing and it feels like it’s getting out of hand then this can be highly disheartening. If that’s the case then you should just tell the person how you feel and that you’re starting to struggle with the mess they’re leaving. Don’t point the finger though and don’t make them feel victimized – if you do then you should expect a negative response back – especially if they’re under the impression that you are the messy one.

If you speak to the other person about their untidiness then that gives you the opportunity to together come up with a solution and a system that works for both of you. This is an easy way to get around the problem of mess because it means that everyone knows what they need to be doing and no one feels like they’re being unfairly criticized – they’ve either done one of their chores or they haven’t. And the great thing about coming up with a system is that you don’t even need to tell them you’re unhappy with their cleanliness – you can suggest that you come up with a system together under the pretense that you think it would help both of you to enjoy a tidier house.

A system will usually mean simply segregating the tasks. For instance then your job might be to wash the dishes, take out the trash and to vacuum the rooms, while theirs might be to water the plants, dust the surfaces and wipe down the kitchen and bathroom. As long as you are both happy with your jobs this can prevent arguments.

Another system to put into place as well/instead, is to have a set day that tasks get done. This avoids the situation where one of you (them in this case most likely) claims to be too busy or too tired during the week to tidy up. If you have a set day for tidying, then that will mean that they simply have to keep that day free and that you all know what is happening.

Sometimes you will still need to give the other person a little nudge – even with a solid system in place. You might find that for whatever reason they haven’t done one of their chores, or you might find that they still leave something unsightly in the bath or worse, the toilet. In this case you need to get them to tidy up after themselves, or try to avoid it happening again, but there are ways and ways of doing it.

One method is to ask them to help you rather than to ask them to do it. You can say something like ‘I’m going to wash up the dishes, would you mind drying them?’ or ‘could you give me a hand carrying this bag of trash?’. This way you are showing willing too, and they can’t really complain.

Another thing to do is to give a reason that whatever you want done needs to be done now. If you just ask them to tidy in the kitchen when they’ve had a long day at work they’ll probably just tell you it can wait – or do it but be full of resentment. Instead give a good reason why you’d like them to do whatever it is quickly. For instance – ‘would you mind cleaning up the kitchen? My Mum’s coming round later today’. Or alternatively ‘could you please wash up in the bathroom, I’m just about to take a bath’. This seems a lot more reasonable and doesn’t seem like you’re being demanding for the sake of it.

Worst case scenario though, sometimes you do just have to come clean (no pun intended) and complain. In this case just explain honestly that it’s getting you down and ask them to do it more readily in future. Getting it out in the open early, rather than letting it stew can prevent it from turning into a full blown argument later on down the line. At the same time make sure you make this an open forum and give them the opportunity to make any complaints they might have too.