There are countless phobias out there and some of these phobias seem completely erratic. For instance ‘antidaephobia’ is the fear that ‘somewhere, somehow, a duck is watching you’.

Fear of blood however, or ‘hemophobia’, is a far more common and understandable phobia and is one that many people experience to an extreme degree, even fainting or going into hysterics at the sight of it. Fortunately blood is something that we don’t encounter regularly and so is relatively easy to avoid, however it can still be a serious problem and particularly if it renders us inert in the face of injury (either our own or someone else’s). At the same time the extreme physical reaction is also something that would be better avoided and fainting can in fact be dangerous if it occurs under the wrong circumstances (for instance while driving or on the stairs).

So how does hemophobia come about? And what can you do to treat it? Here we will look at the problem in more detail. 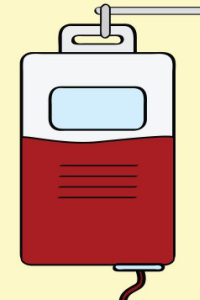 The most common cause of hemophobia is direct or vicarious (observed) trauma during development. So for instance if you were to see someone become the victim of a serious injury such as a head trauma for instance then that might be enough to instil a permanent fear of blood (this is called ‘social learning’). Likewise if you yourself were to seriously wound yourself in childhood this too could be a memory that stayed with you.

Of course not all cases of blood phobia do stem from such an event and many people with hemophobia do not remember ever experiencing such a trauma. Thus in these cases there must be another explanation for the problem. Psychodynamic therapists might explain this as being based on a repressed and not necessarily related memory – perhaps you watched a terrifying program about a red car when you were younger and then made the association with the color red. Alternatively a behavioral explanation might blame continuous reinforcement of the idea that blood is scary and bad – which could come from overly active parenting for example (social learning is also an example of a behaviorist explanation). A cognitive explanation finally would look at the faulty thought processes that could manifest as a blood phobia. This might mean that the person is thinking things like ‘Blood is full of germs’ or ‘If you lose too much blood you can die’ which are unhelpful thought patterns in the situation. These thought patterns become self perpetuating, and again they are often the result of strict parenting – here the voice in your head is often the voice of your parents.

Interestingly some studies have also demonstrated a possible genetic cause and some twin studies have suggested that there is a familial link with this particular phobia (though the studies have not been fully able to remove confounding factors – such as the fact that the children were often raised in the same environments). A genetic link is certainly possible, and it may be that some genes give an individual a personality that is predisposed to blood phobias and that environmental factors then do the rest.

Treatments for blood phobias are largely the same as treatment options for other phobias. Medication may be used in order to ease anxiety and discomfort, but in the long term it is important to remove the phobia and not to rely on antidepressants or anti-anxiety medication which can be addictive and expensive and which sometimes has unwanted side effects.

Seeing a therapist then is the best way to get to the route of the problem, but depending on the therapist you see and the nature of the problem you might be better suited to different forms of therapy. These include:

Desensitization: Desensitization comes from behavioral psychology and is based on removing the negative associations help with blood. The belief is that through observation or direct experience you have come to associate blood itself with pain or fear (rather than the event that cause the blood) and as a result have an immediate physical reaction in its presence. Desensitization aims to remove this association by gradually increasing exposure to blood – perhaps initially keeping you in the same room as a drop of blood then getting closer in future sessions. Controlling breathing and the use of rewards such as chocolate can then create new more positive associations that erase the previous reactions. This is a form of treatment that is generally very effective, but it requires a lot of patience and dedication.

Cognitive Behavioral Therapy: Cognitive behavioral therapy is the currently ‘in vogue’ form of psychological therapy. This school of thought takes the behaviorist approach and ads on top a cognitive element that looks at the role of our thoughts and ruminations in creating fear. Here you will learn to analyze the contents of your own thoughts with techniques like ‘mindfulness’ which might be things like ‘Blood can contain AIDS’ or ‘It might get on me’ and then instead to replace these with more positive thoughts ‘Blood can’t harm me unless I drink gallons of it’, or ‘Being scared won’t help the situation’. You then use positive affirmations and rationalization to overcome the negative thoughts and replace them with these new more positive ones. This is a less in depth and traumatic process than desensitization but not always as effective. Often CBT however will also include other strategies such as biofeedback, controlled breathing and diary keeping to supplement the spoken element.

Psychotherapy: Psychotherapy is the form of therapy derived from Freud’s psychodynamic approach to psychology. This then looks at the ID, Ego and Super-ego, at unconscious desires and drives and at events in our childhood development. This will involve many long talking sessions that aim to look at repressed urges and memories that are causing the phobias and to unravel any other psychoses at the same time. This is a lengthy and emotionally draining process, and though some will find it very enlightening, others question the validity of Freud’s methods.

While those forms of therapy will aim to remove the phobia and address the root causes, it is also possible to manage the symptoms such as fainting and low blood pressure. This is achieved by using something called ‘applied tension’ which means tensing muscles in order to raise blood pressure and prevent the drops that occur in the face of blood.