Semantics are a powerful and important thing, and the way we describe something can sometimes suddenly throw new light on it. For instance take this concept – ‘addiction to self-judgement’ – a description of low self-esteem that instantly sheds new light on the concept and helps us to look at it in a different way.

Anything can become an ‘addiction’ in so much as it becomes a regular pattern of behaviour, and this goes equally for psychological and cognitive behaviours. After all, it’s our thoughts that drive our actions so without addictive thought patterns there would probably be no addictive behaviours. Our brains love habit and routine, and if you do something often enough eventually you can begin to strengthen those neural pathways and it can become hard to get out of that process.

How Does Self-Judgement Become an Addiction? 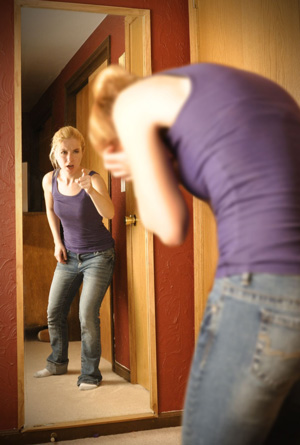 Most addictions work on the premise that you get a chemical reward for the behaviour – and in the case of sex, alcohol or computer games this is true and we become addicted to the release of dopamine (the reward chemical) in our brain, or a chemical associated with the drug we’re using.

The question is then, how can something negative which creates no ‘reward signal’ in the brain, be considered addictive?

Well in this case what’s happening is that we are creating a habit more than an addiction, but at the same time reinforcing that habit each time we do. Let’s say that you would believe yourself to be bad in social situations and you are a harsh judge at your ability to socialize. This makes you nervous and anxious in those social situations, and as such you become more likely to stutter or to say something awkward as you will be experiencing the stress response. This then in turn reinforces your belief that you are no good and you begin to believe that judgement even more, while at the same time your brain which is used to ruminating in this way starts to think negative thoughts almost habitually and without your conscious control.

In that way you’ve become essentially ‘addicted’ to this self-judging behaviour, and you are likely to be paralyzed by it at the same time.

So the real question is how do you go about breaking this cycle and ending your self-judgement behaviour? Of course as this isn’t a real addiction, you’re unlikely to suffer any kind of withdrawal, but it can be difficult to break what has become very much an automatic response.

This is where CBT comes in – or cognitive behavioural therapy – which is a type of psychological therapy favoured currently by most health institutions. The idea here is to identify negative thoughts, and then to work to ‘override’ them with more positive ones – or encouraging ones.

To identify those thoughts and ruminations cognitive behavioural therapists recommend using a technique called ‘mindfulness’ in which you practice simply being aware of your own thoughts. You can do this during meditation, or just as you go about your daily life, but the general idea is to attempt to observe the content of your thoughts without attempting to control them. Watching them ‘drift past like clouds’.

Now what you will attempt to do is to note all the negative and judgemental thoughts, and to replace them with more positive ones. This you can do by using positive affirmations which are more positive statements. Next time you are evaluating your performance in social situations then, or your looks, or your general intelligence, you will make an effort to control your thoughts and to instead make positive affirmations such as ‘I know I’m charming and attractive’ or ‘my friends love me no matter what I say’ – both of which can help to relax and empower you in the short term. You can also practice using these generally as you go about your life, by using an app perhaps or even leaving post-its and messages around your home.

In the long run however, these thoughts will have the effect of becoming habitual in the place of your negative thoughts and you will find that these become your default thoughts instead of the positive ones. It’s possible to become addicted to anything – so just make sure that you become addicted to positive behaviours and thought patterns that are going to help you and this way you can use that fact to your advantage.