If you subscribe to evolutionary theories of psychology then you will know that everything that happens in our brains should happen for a reason. Even if it seems irritating now, there was a time when that frustration, that procrastination and that stress would have helped you to survive.

But what about boredom? Boredom is an annoying phenomenon that sets in just as we settle down to relax. It occurs when everything is fine, when there’s nothing pressing to do (or something very simple to do), and when in theory we should be able to just switch off and chill out… 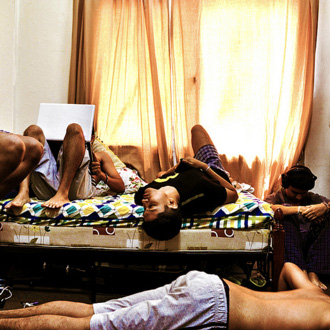 So what possible purpose could boredom have? Why would we be compelled to seek out more challenges and adversities when we would be safer to just enjoy ‘being’. Let’s take a look at what’s going on in that brain of yours. I’ll try not to make it too boring…

The first thing we should get clear right away is that boredom matters. It might seem relatively trivial, but boredom is in fact potentially dangerous.

Boredom can be measured by a scale called the ‘Boredom Proneness Scale’ or the ‘BPS’. And according to this scale, those who are prone to boredom are also prone to several other concerning traits and behaviours – including depression, stress and even drug addiction. Apparently boredom proneness is the best predictor of all of whether or not someone is likely to stay clean when recovering from a drug addiction.

This is the reason that psychologists have seen fit to study boredom in a little more detail and to look at what’s going on in the brain when we feel that way.

And what they found is that despite a 5% drop in overall brain activity, people who report themselves being ‘bored’ actually have higher levels of brain activity in the areas responsible for autobiographical memory, thinking of hypothetical events and thinking about others.

But what triggers this state? Well partly it’s down to dopamine, which is the ‘reward’ chemical in the brain. Those who suffer with chronic boredom have been found to have fewer dopamine receptors in the brain. This means that they then require more dopamine in order to experience the same level of excitement that others might feel readily easily.

As we stated at the start of this article though, all these psychological phenomena have some kind of reason for existing and boredom is no different. What might the purpose of feeling bored be? Well to keep us moving of course, and to keep us examining and thinking and challenging ourselves. A feeling of ‘boredom’ might be what pushed primitive man to explore and to spread across the continents, to experiment with rubbing sticks together and thus create fire and generally to create many of the luxuries that we take for granted today. That increased activity in the regions responsible for hypothetical thinking, might just have allowed us to hypothesise new and more efficient ways of living.

And there’s more. Our brains actually need stimulation and they especially need novelty. This is what allows our brains to maintain their plasticity and flexibility, it encourages neurogenesis (the birth of new brain cells) and without it atrophy will increase. Use it or lose it…

Of course there is also such thing as too much stimulation – the aim is to find that optimum balance between stimulation and calm that is unique to each of us. Find this point and that way you can avoid stress and enjoy relaxation, but at the same time keep yourself stimulated and focussed.