We’ve all had moments when our favourite band comes on the radio, and after looking around quickly to see if anyone’s watching, we get up and start shaking our booty while singing at the top of our lungs. Suddenly we feel full of jubilation and full of energy like the world is a great place and in many ways it’s one of the most pure forms of joy that you can feel – even if it is a little embarrassing when your neighbour has to bang on the wall to get you to shut up. 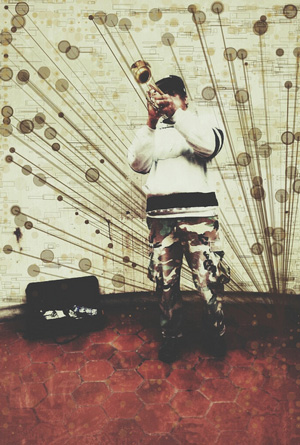 We’ve all felt this, we all recognise it, and so we tend to presume that it’s pretty much… normal, right? But hang on a second, if you step back and think about it logically, why should a few beats and a melody make you start shaking around like a mad person? What purpose does it serve and why does it happen? And why is it that when a sad tune comes on you can even feel like crying? Even without any lyrics or context?

Obviously something interesting is going on in the brain, so let’s take a look and find out a little bit more…

One thing that research tells us about music is that it can ‘entrain’ our brainwaves. In other words, listening to music can cause our brainwaves to resonate at that same tempo, and this in turn can cause our body to synchronise in a number of other ways too: our heart rate will speed up or slow down as will our breathing.

Already this is going to have some impact on the way you’re feeling. When your heartbeat and breathing is slow, this of course makes us feel more relaxed and calm – which may be one reason that ambient music can make us feel more at ease. But at the same time, when our heart rate speeds up this makes us feel energised and ready to go – which is one reason that workout playlists can be so effective in getting us through a gruelling workout. So far it appears that only humans and songbirds have this reaction to music.

At the same time, it does seem that there’s also a little bit more going on under the surface when we listen to music and some of this has to do with brain chemistry.

When you listen to ‘pleasant’ music for instance, this can lead to the production of serotonin and dopamine which are the happiness hormones that get produced when we’re content or when we eat good food.

Another effect of music that most of us are familiar with is the way that it can cause old memories to come flooding back. When you hear the song that you used to listen to with your ex it can make you feel sad, while the songs that were in the charts when you were 18 can make you feel whimsical.

The reason for this is that listening to music seems to light up the hippocampus – the part of the brain responsible for storing long term memories. So while many things might have been going on at that time, it’s the music that is likely to form a particularly strong association with that recollection. Those suffering with Alzheimer’s and dementia can even be aided in recalling previously lost memories through the use of music.

So far then it seems that our reaction to and appreciation of music is due to some changes that the beat and melody can produce in our brain and our bodies. But speaking of associations, this might also help to explain some of the more subtle effects of music.

You see, while our reaction to music seems to be relatively consistent across cultures, this may have become exaggerated by the media and the things we are exposed to. Happy music is something we all understand as ‘happy’ and thus it is played on happy occasions (such as birthdays and weddings) and in happy scenes in films. Meanwhile, sad music which has a slow pace and often a minor key will be used at funerals and during the more upsetting scenes in films. Thus it wouldn’t be that much of a stretch to imagine that some of our response to music is learned through association – only strengthening our reaction to it.

But the real question is why our brains respond this way. Why do we automatically fall into rhythm with music that we hear? And why does it trigger the production of dopamine?

Well rather frustratingly the answer to that question isn’t entirely known and it’s something that scientists are still looking at.

However there are those who have attempted to answer this question by looking at music from an evolutionary perspective.

Some here take the stance that music is an example of ‘exaptation’. This is to say that music itself is not adaptive, but is instead the by-product of some other adaptive behaviours. It may be that music mimics certain sounds that our primitive brains once associated with safety, food and shelter (such as the chirping of birds or the trickling of water). Similarly it could be that our tendency to match the rhythm of the music could be related to our tendency to match the rhythm of other people that we are interacting with (which helps us to build a rapport).

Other theories however have speculated on directly adaptive origins for music. It may be that music was formed originally as a way of marking territory – that we used shouting and rhythms to scare away trespassers (banging drums is often used territorially even now) and that this later became useful as a form of socialisation and as a way to bring together a community.

These however remain theories and are controversial still at best. Music is by nature ‘modular’ being made up of multiple parts (rhythms, instruments, melodies, lyrics etc.), which makes it hard to explain by way of a single adaptive need. So at the moment music and its effect on our brain remains something of a mystery, but surely that just makes it all the more powerful?