Virtual reality for a while now has felt a little bit like a ‘retro’ version of the future that no one takes quite seriously. Like flying cars, we’d kind of given up on the hope of ever creating truly immersive virtual reality in the ‘Tron’ or ‘Matrix’ kind of sense. Virtual Boy from Nintendo was pretty much the nail in that coffin… 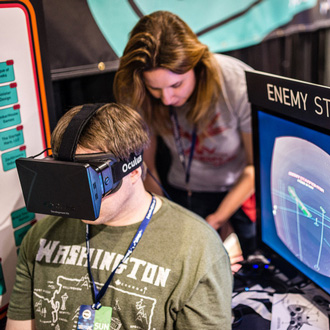 But in the last year all that has changed thanks to the Oculus Rift. This is a genius device that found its backing on crowdfunding site Kickstarter, and that uses a 3D stereoscopic display that fills your entire field of vision along with ‘super-low-latency’ head tracking to allow you to look around with your neck as you might when really exploring a new place. In short it’s an entirely immersive experience and when combined with motion controls (such as the Wii-like Razer Hydras, the Kinect or the ‘360 degree treadmill’ that is the Virtuix Omni) you get something that is finally making people take notice of VR again.

What this has done though, is opened up a dialog on the topic of virtual reality, and the possibilities for the future are really rather incredible. The Rift has been developed with gaming in mind and that’s currently the main use, but already developers are beginning to look into some of the other possibilities. ‘Titans of Space’ is a tech demo that takes users through the planets and tells them all about them which greatly demonstrates the potential for VR to be used in education. VR Cinema meanwhile lets you watch films on your computer on a ‘big screen’ while sitting in a virtual cinema, and even lets you sit next to friends across the world and enjoy the film together. Make VR allows you to create 3D models in an intuitive way – just as you might with your hands out here in the real world (it also uses the Hydra) and others are working on office environments for advanced multitasking.

The Oculus Rift is even being considered as a therapeutic tool. Some studies have found that it can be useful for patients suffering with ‘phantom limb syndrome’ (a condition where they still feel pain in an amputated limb) by helping them to correct their mental ‘body map’. Others have looked into its usefulness in treating PTSD. Meditation software is also a no-brainer and could obviously provide a great way to ‘escape’ from your stress after a busy day (if you’re one of the lucky few who has one, then check out ‘Blue Marble’ for a very relaxing experience).

But what effect does all this have on your brain? What can we learn from that? And how could that effect be exploited? Could we see a Lawnmower Man situation one day where we use VR to improve our intelligence? And does our brain really ‘fall’ for it when we’re in the games? Read on to see what the psychological impacts of VR are.

Achieving Presence Through the Senses

The main aim for any virtual reality system should be to try and create the feeling of ‘presence’. This word describes the feeling of ‘being’ in the situation that the simulation is trying to convince us that we’re in. Not just ‘seeing’ the world around us but knowing that we’re still in the room, but momentarily feeling as though we’ve been transported.

Of course our feeling of presence comes from our senses. The only method we have for understanding the world around us is to listen to our senses and the pictures/sounds they are showing us.

And with a pair of headphones on, the Oculus Rift is capable of fooling at least two of those senses: sight and sound. But as you should know, we have far more than just two senses to rely on. Senses such as our sense of balance (or our ‘equilibrioception’) are also crucial for helping us build a picture of what’s going on. Then there is our sense of touch and our related sense of temperature, some studies suggest even that we have a sense of ‘orientation’ (in that we can ‘sense’ magnetic north) although we’re not aware of it. Then there’s the sense of our body in space – the sense of where our arms are etc. – which has so far only been partially replicated by motion controllers.

So Are Two and a Half Senses Enough?

Unfortunately the Rift doesn’t provide quite the full spectrum of senses that we would need to actually feel as though we are ‘there’. However it does come close in some cases thanks to the relative importance of sight and sound. Sure we might not feel the slope when climbing a mountain, or the lick of cold wind against our skin, but as everything we can see and hear lines up our brain remains relatively convinced nonetheless – enough for some people to actually feel a sense of vertigo when looking over the edge.

And it’s also worth noting that there are ways to get around these problems. For instance, if the game puts the player inside a ‘cockpit’ then they can reasonably expect to be at room temperature and to feel upright and stationary even when they are moving quickly through the desert. As such, developers are quickly realising that putting players in cockpits or seats is one of the very best ways to accomplish a sense of presence.

The Importance of Prediction

One of the other reasons that the Oculus Rift can feel quite real even with only two senses accounted for, is the importance of prediction in the human brain. One of the most important roles of the brain is to try and predict what is going to happen in order to help us avoid hazards and survive. Thus a lot of our sense of presence is based on cause and effect – when we look left we expect to see our vision change. And when we walk off a cliff, we expect to see ourselves fall. Because the Rift and other VR systems can achieve this, the feeling of being in a real world is greatly enhanced.

All of this of course is speculation though, and it would take some real studies to see whether sight, sound and some cause and effect could really fool the brain on any level. Fortunately a few such studies exist and have shown that we engage with VR in a very real way. For instance, if you’re in a virtual reality environment and an NPC (non-playable character) smiles at you, then you will usually smile back even without being aware that you’re doing so. Likewise, when avatars stand too close while talking, participants have been shown to step backwards to get them out of their ‘personal space’. Participants have also been shown to recoil physically (and even remove virtual limbs from harm – showing how quickly the brain will accept a virtual body as its own) and to be more easily startled, all demonstrating at least some immersion into the game.

Other studies however have also shown the limitations of virtual reality. For instance, a study on rats has demonstrated the importance of ‘place cells’ – neurons which we use in order to create virtual maps of the world around us. When placed in virtual reality, the cells in these rats saw a drop in activity of 25%. Quite how they put rats in virtual reality I am not entirely sure…

So what does all this tell us? Of course it tells us that the Rift is clearly suitable at least for games, and in that scenario it’s probably preferable that we don’t fell 100% immersed (that could be potentially horrifying). But it also shows that it may have some limitations when used for other purposes. Sure, visiting a virtual version of the Coliseum might be an amazing experience, but you are still going to want to go there for real.

That said, for people who are perhaps disabled and unable to experience such things for themselves for real, this might be a nice way for them to feel as though they haven’t missed out quite so much. Additionally, the variable sense of presence may be enough for some other applications too that would be of interest to psychologists. For instance, it could be used to help patients come to terms with their phobias – if you have a phobia of spiders then you could use the Rift to gradually expose yourself in a real feeling way while knowing that you can remove the headset or close your eyes at any time. A recent release from the current ‘VRJam’ (a competition open to VR developers) called ‘SimUSpeak’, puts users in front of a big audience at a conference centre to help them practice public speaking. This could be very useful for those with glossophobia (a fear of public speaking), but might also be useful for psychologists studying the condition. Which areas of the brain fire? What can be done to calm them down?

It’s also worth bearing in mind that patients with phantom limb syndrome have been shown to be able to change the physical structure of their brain by changing their perception of their own body. Could you potentially do the same thing with virtual reality in someone with a regular body image?

Of course there may also be implications of the VR itself as the technology improves and develops. Could this level of simulation lead to confusion in the real world? Might we get too used to being able to survive large falls and end up having more accidents? Or could virtual reality prove to be so compelling in future that we end up choosing it over the real world? If we can get experiences in the virtual world that are compellingly sexual, gratifying, exciting, wondrous… how might that change the way we choose to spend our free time out of virtual reality?

Some of these questions we can’t possibly know the answer to just yet, so we’re forced to speculate and imagine. Which is the original virtual reality experience after all….