The book ‘Thinking, Fast and Slow’ by Daniel Kahneman is one of most celebrated recent books on psychology and one of the most popular among self-help gurus. The book details research conducted by the author alongside his colleague Amos Tversky, focussing largely on cognitive bias and prospect theory.

One of the most interesting concepts in the book – and the one that gives it its title – is the examination of the two systems that our brains rely on to process information. The central thesis here is that our brains use two distinct modes of thought which are referred to as ‘system one’ and ‘system two’. As you may have guessed, system one is fast, and system two is slow… 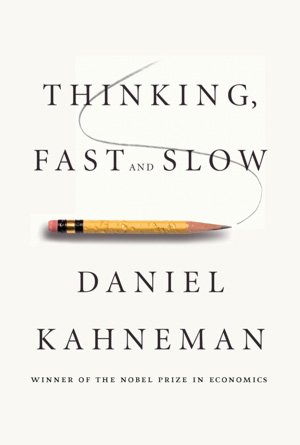 While the book is well worth a read if you haven’t seen it already, we can look at the concept here and you’re likely to find that’s enough to give you some fascinating insight into your own decision making process and the limitations of your own brain.

Before we do that though, here’s a little question for you: how many of each animal did Moses take on the ark? Think carefully before you answer…

So what do you think? Two right? Well if that was your guess then I hate to say it… but you’re wrong. ‘Moses’ didn’t take any animals on the ark (whether you’re religious or not) – it was ‘Noah’ who featured in that particular story. You probably knew that, but if you guessed wrong then it will have been because your ‘system 1’ – your ‘fast thinking’ got in the way. Let’s look at why…

Differences Between System 1 and System 2

As soon as you see that your brain will get to work and will quickly use heuristics and past experience to tell you things about it. You’ll recognise it as a maths problem and as a multiplication and you’ll probably gauge it as being moderately difficult but not outside your capabilities to solve. That’s your system 1 or ‘fast thinking’ doing that.

Now, if you try and actually solve the problem you will start using an entirely different set of pathways in your brain – you’ll be using your slow system, ‘system 2’.

When you do that, your muscles will tense slightly, your pupils will dilate and your heart rate will even increase as you put physical effort into the work (I’ll save you the trouble, it’s 442).

These are two different pathways through the brain that engage different brain areas and functions. Essentially the purpose of the ‘fast’ system in the brain is to give us the ability to rapidly make decisions that let us operate in an optimal manner. If we automatically engaged our problem solving skills every time we saw a maths problem, we’d leave ourselves vulnerable to attack as we became distracted with doing the maths and lost awareness of what was going on around us.

Without realising it, we rely on our ‘system one’ type of thinking for a range of different daily tasks that we take for granted. System one tells us whether things are dangerous or not, it tells us how big things are, how far away things are, how fast things are moving and more. If someone throws a ball to you, your system one will use rapid – though not incredibly accurate – maths in order to tell you where you should put your hand to catch that projectile.

This is all very well and good, until circumstances conspire to ‘take advantage’ of our fast forms of thinking. An example of this is the well-known optical illusion that asks you to gauge the length of lines on a page.

The lines essentially look like this (though it doesn’t work in ascii):

And the question then is which is longer. When the illusion is presented correctly, the middle and bottom lines appear significantly longer than the top one due to the external cues that tell our brain the middle one must be shorter.

You may also have seen illusions where figures are placed onto a 3D image with those placed near background cues appearing larger due to the contrast than those placed at the foreground.

What’s amazing about this, is that even when we are consciously aware of the illusion, we still can’t always force ourselves to perceive the illusion the way it really is. That’s because our system 1 kicks in automatically and rapidly whereas our system 2 needs to be actively engaged to start working.

From an evolutionary perspective this is the most useful system – optical illusions didn’t exist when we were hunting antelope, and so smaller looking objects on the horizon would be further away. Our system one would have interpreted this automatically allowing us to accurately gauge the distance while we thought about plans of attack with our slower system of thought. It’s particular important that our brain default to system one as well seeing as engaging system two seriously can actually leave us ‘effectively blind’ to the outside world. This is why you often don’t hear what people are saying to you when you’re busy thinking, and it’s why stereotypical scientists may seem ‘absent minded’. When you turn your attention inwards, you lose the ability to focus on what’s going on outside – which is why we need quick brain ‘tricks’ to quickly paint a picture of what’s going on almost like an impressionist painting.

There are many other situations where our system one thinking can be used against us. For instance, in the example I gave at the start of this article, your system one thinking process will have kicked in and told you that Moses took two of each animal onto the ark, even though you know that the story was about Noah and not Moses. The problem is that the biblical context ensures that the word ‘Moses’ doesn’t seem out of place and so your system one which wants to provide a rapid and energy-efficient answer will guess what the question is about and provide an answer. System one loves context cues. Don’t feel bad if you got this one wrong – it fools such a high proportion of people that it is actually known as the ‘Moses Illusion’.

System one is now probably telling you that the answer is ten cents. That seems to be accurate with the available information, but if you stop and engage system two, you’ll (eventually) work out that the bat cost $1.05 (think about it for a while…).

For the purpose of budgeting, system one is probably ‘close enough’, but if you were sitting a maths exam, system one would land you in trouble and get you a bad mark.

So is this a problem? No, not really – for the most part it’s the most efficient way for the brain to work, which is precisely why we evolved this way.

But it is useful for us to be aware of this distinction and that we recognise that our first impressions may not always be accurate. If you want to be sure of your conclusions, then you need to give important problems serious consideration and time.

And if you want to learn more about the workings of your brain, then check out the book Thinking, Fast and Slow. There’s a lot more great stuff in there. But read it slowly!