Generally people are very down on arrogance, egotism and narcissism. It’s not considered very pleasant or very healthy and generally it’s frowned upon by a society that much prefers people to be humble and modest.

While being humble may have a lot of plus points however, I feel it’s also important to recognise that there is some value actually in being a little egotistical and proud. Being a little arrogant at least internally is actually pretty important and sometimes it can even be useful to be an egotist in your behaviour too…

How Arrogance Can Be Helpful 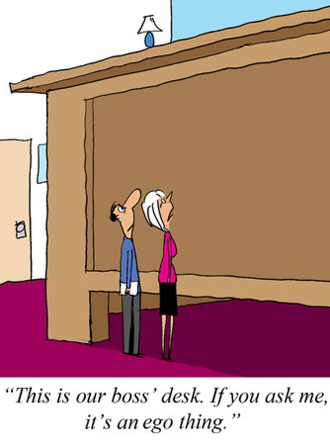 People don’t like arrogance because it can sound like bragging and because arrogant people have a tendency to assume they are right or that their way is better. This in turn makes people feel belittled and rubs them up the wrong way, but there are definitely cases where it’s important to stand your ground and to assert yourself.

If it is arrogant for instance to speak out when you disagree with someone, then it’s certainly useful in some cases to be arrogant. A friend or relative trying a new diet that you know is potentially going to hurt them? If you speak up and tell them you know better, then you may risk being called arrogant. If you don’t however, then you risk sitting back and letting the person you care about become ill. Which is better in that situation?

In short, you need a little arrogance to believe that your point of view is right and in order to speak up to defend it. This might not make you popular always, but it’s a highly important trait that at least some people need. If no one had enough arrogance to think they knew better, then the status quo would never be challenged and nothing would ever change. Was Einstein arrogant?

Likewise developing a product that you think people are going to want and you think will fend off the competition will also require arrogance. As will writing a book and thinking anyone would want to read it. Steve Jobs was arrogant, and so too was Shakespeare.

And if you’re ever going to become a leader, then developing the required self-esteem and outward bravado to take charge is going to be a must. Was Churchill arrogant?

Why Arrogance Is Important For You

So some people being arrogant is important for society and for the good of others – but being impressed with yourself can also be very beneficial for you personally. For example it will always take a little narcissism if you’re going to spend a lot of time on your appearance and/or spend lots of money on expensive products for your hair and skin.

You could be more modest, and you could not spend the time making yourself look your best, but then you’d find you didn’t perform as well in your career and that you would struggle more to meet potential partners. Once again being a little self-involved and slightly proud can be beneficial.

You’ll also find that while being someone who ‘always thinks they’re right’ quickly earns you a reputation for being ‘arrogant’, being someone who never speaks their mind and never has an opinion will similarly make you seem ‘wet’ and passionless. Or completely disinterested…

Being confident and a little arrogant is also very useful if you’re ever trying to promote yourself or to promote a product. Try getting people to listen to you or to buy your goods when you’re only ever down on yourself and you’ll find it’s something of a struggle.

Being overly confident is also useful for making others see you in a positive light. What many people who go out their way to be self-effacing don’t realise, is that often others will believe them. Keep telling people that you’re not very interesting or that you aren’t very smart – and they will quickly believe you. And once that happens, you can quite quickly find people listen to you less and people trust you less.

Worst of all, if you’re constantly down on yourself, then you can quickly find that you end up believing it yourself. Then ‘being humble’ quickly becomes ‘having no confidence’ and you end up being less happy and achieving less as a result.

Getting The Balance Right

This article is not a license however to start telling people how amazing you are, or to start developing a huge ego that leaves you with no friends. Rather it’s just a diatribe in defence of being a little more confident and occasionally letting that show.

The trick is to be ‘quietly confident’ for the most part, but to speak with conviction when it’s a topic you’re passionate about or when the situation calls for you to promote yourself or take charge. Learn how to market yourself, and don’t be too afraid to offend a few of the more sensitive types.

And let’s be honest – deep down we’re all a little bit arrogant on one subject or another. We all think we’re good at at least something. Let that shine through like the good narcissist you really are and you’ll find that the stars start to line up for you a little more often…