Most of us have any number of bad habits we don’t want (like drinking or biting our nails) as well as lacking habits that we could possibly benefit from (like flossing or going to the gym). The problem is that it’s not always easy to change behaviour and especially when that behaviour is something that needs to be ongoing and that will require commitment and effort.

Starting an entirely new gym routine and going there for hours every single day is something that will always be disruptive to your usual routine for instance and if you already struggle to fit everything you want to do into the day then this will be almost sure to end in failure. 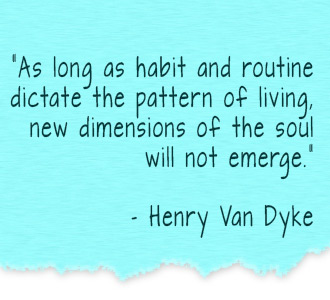 BJ Fogg, a professor of human behaviour at Stanford University though believes he has the answer: a movement he is calling ‘Tiny Habits’.

The Three Things That Can Change Your Behaviour

For the full low down on ‘Tiny Habits’ you can visit Fogg’s website or watch his Ted talk on YouTube. Essentially though, Fogg believes that taking ‘baby steps’ to accomplish goals will be much more effective that hoping to simply completely change your behaviour and life overnight in one swoop.

According to Fogg’s research, only three things can effectively change behaviour:

The first of these options is something that can’t be forced, which rules it out for now. The other two meanwhile are what make up Fogg’s ‘Tiny Habits’ program, which takes place over five days.

Sharing the ins-and-outs of ‘Tiny Habits’ is not the purpose of this article. The method is protected by copyright and seeing as you can try it out for free on Fogg’s website, there’s no reason not to go and find out more yourself.

That said, the general idea behind ‘Tiny Habits’ is really rather self-explanatory and it’s interesting to consider the implications of that alone.

Essentially the program suggests introducing very small habits into your routine to begin with and then building them up over time. For instance, if you wanted to start a new training program, you might begin by just doing ten press-ups every day. Someone I spoke to about the program learned to floss their teeth by flossing just one every day.

Why does this work? For one it is habit forming. Like it or not, we humans are creatures of habit in a very real sense and once we get used to doing something regularly we then fall into a pattern that’s hard to break out. This is a good thing if that pattern is flossing right after brushing our teeth.

Another reason this works well is that it allows you to get the sense of reward that comes from achieving something, which very quickly starts to enforce the idea that the behaviour you’re engaging in is a positive one. This is why Fogg also suggests that his participants have a small ‘celebration’ after completing each mini-habit, just to further enhance the benefits of these reward hormones.

Finally, introducing a habit more slowly will also give you the ability to adapt to that behaviour more and more so that your lifestyle can fit around it. Instead of suddenly having to fit in an hour’s worth of working out, you only need find an extra few minutes occasionally in order to give yourself more time for training.

There are other behavioural ‘hacks’ that Fogg uses in his method, including the aforementioned changing of the environment and a smart way of combining new habits with old ones (such as doing press ups after going to the toilet for instance).

You can learn more about this from the man himself, but even if you don’t delve any deeper – why not try introducing a tiny habit into your life? Perhaps washing one plate after dinner could be the start of a great new lifestyle?