Normally when we read or hear about compartmentalization, it is in a negative sense. We’re often led to believe that creating separation in your mind can lead to various health problems as you end up repressing negative experiences and generally refusing to face your fears, anxieties and concerns.

If you ever ask someone what makes a good job, one of the things they will often say is when you don’t end up ‘bringing work home with you’. This is a fairly abstract sounding idea but what is meant is that some jobs let you ‘switch off’ the moment you unplug from work, while others keep you constantly second guessing your decisions and stressing even once you’ve gone home. The latter isn’t particularly healthy though, as it means you’ll be unable to rest, repair and fully recover from the previous day.

But really the ability to ‘switch off’ when you get home isn’t about your job so much as it is about your own psychology. This is where compartmentalization comes in handy, as it lets you literally close the door on your problems and not deal with them until you can actually do something useful about it.

This can also be useful at work, as it allows you to focus on being productive without worrying about other things and because it gives you a chance to recover when you need it.

Nobody can work for 8 hours straight without becoming distracted at any point. This is simply asking too much of yourself and if you try, you will likely find yourself procrastinating. This is where a lot of us go wrong when we have a large amount of work to do: we try to do it all in one go and end up on Facebook, not actually accomplishing anything.

Instead then, you should aim to be productive for a shorter period and then to have a short break and start again. This is precisely what the ‘pomodoro technique’ involves. Here, you set a timer to last for 25 minutes. During that time, you then work on something productive. Once that timer has run out, you then give yourself five minutes to do something relaxing or enjoyable – such as making a cup of tea, or checking Facebook. 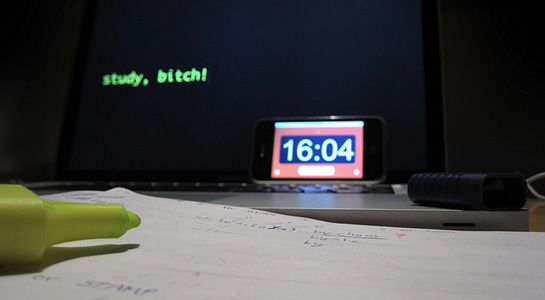 Why is this so effective? Because it lets you focus intently on work for a set period of time and when you think about doing something distracting, you will be able to stop and think ‘only seven minutes and then I can legitimately check Facebook’. This prevents wanton surfing of the web.

What’s more, during those five minutes you now won’t be stressed thinking about work. Instead, you can actually recover and enjoy the time, thereby ensuring you’re getting genuinely beneficial recovery.

As the saying goes ‘walk or sit, don’t wobble’.

More on the Pomodoro Technique

Another benefit of the pomodoro technique and another example of ‘useful compartmentalization’, is that it allows you to focus on just one single problem at a time. This is a very powerful tool because it encourages you to work in a sequential nature – focusing on just one task at a time instead of trying to multitask.

Countless studies show that multitasking is actually bad for productivity (1) and in fact actually psychologically ‘impossible’. What we actually do when we think we’re multitasking is to switch quickly from one task to another.

Using the pomodoro technique, you can tell yourself strictly to focus on just the one task. And once you’re following such a strict program, you won’t be tempted to move on to other tasks – you’ll just focus intently on the one task until it’s complete.

The pomodoro technique is not perfect however as actually it can be a bit of a distraction to have the threat of an alarm going off right when you’re deeply submerged in a task. For those who are always chasing the elusive ‘flow state’ for instance, the idea of being jolted out of a productive working state can be quite jarring. A similar strategy then would be to break your working day down into chunks – to complete one task, then have your ‘reward’ for 10 minutes and then move on to the next task. Here anything that isn’t work is considered a reward – so you’re not even allowed to stop to make tea or check your e-mail until you’ve completed X amount of words/code/applications.

The other benefit of the pomodoro technique is that it teaches you to be able to switch all your focus onto just one task. This is where the real value of that strategy lies – if you can train yourself to be disciplined in this way, to be ‘on or off’, then you should be able to switch off better when you get home.

Another tool you can use to learn this kind of positive ‘compartmentalization’ is mindfulness. Mindfulness is a form of meditation that is all about focusing your attention on the ‘now’ and becoming highly engaged with your environment, rather than worrying about things that may or may not happen etc.

A strategy I used for learning this is something I call ‘bubble time’. Bubble time is essentially a conscious effort to focus on the fact that there is nothing stressful to do at any given time. So for instance, if you’re in a lift, you just allow yourself to enjoy that ‘bubble’ of time for 1 minute where you know you won’t have to do anything stressful.

But then if you start including times when you only have to focus on one thing and where you imagine that there’s no point worrying about any other thing (because there’s not), you can effectively extend that bubble time to be a continuous and ongoing state. Give it a try!