We are constantly told that stress is bad for us and that we should try and avoid allowing chronic stress to continue for long periods of time. We know that stress increases our heart rates, makes us more likely to suffer with illness and depression and negatively impacts our enjoyment of just about everything we do.

But did you know that stress can even damage your brain? Psychologists now know that undergoing long periods of stress can actually shrink certain brain regions and this is just one more compelling reason to learn better ways to cope. Read on and let’s take a long look at how stress shrinks the brain and what you can do to combat it.

Stress and Your Brain 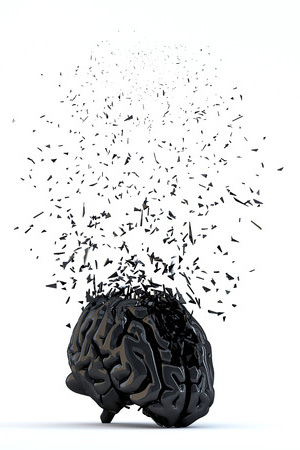 In one 2012 study that was published in Biological Psychiatry (1), it was found that people who had undergone long periods of stress would see reductions in volume to numerous neural regions. Specifically, it was found that the prefrontal cortex, insula, anterior cingulate cortex and more were all significantly smaller than control groups. This was true for those who had lost a loved one and those who had gone through other serious psychological and emotional traumas.

In other similar studies (2), it has been shown that chronic stress can actually cause degeneration in the hippocampus. This makes sense as the hippocampus is a structure in the limbic system which controls our hormonal and emotional responses. As the hippocampus plays an important role in memory, this might therefore lead to impairments in that capacity.

In the short term, stress has another effect on the way we think. Stress causes a kind of tunnel vision in our thinking by making us focus much more singularly on the task at hand. This makes a lot of sense from a survival standpoint, as it means we should be better able to react to an attacker, to escape predation and generally to deal with the life-threatening situation we’re in. The way the brain accomplishes this is by effectively shutting down the prefrontal regions of the brain that are involved with creative thinking and planning. This puts us into a state called ‘temporo-hypofrontality’ (in other words, temporary reduction in frontal region activity). While this might be good for our performance in tennis, it’s terrible for our performance during an interview as it makes us stutter and stumble on our words. It also prevents us from thinking creativity, or finding unique solutions to problems.

In short, stress is a little like having a prefrontal lobotomy. And this may be one reason that we see reduced mass in these areas over time – as they have gone unused and therefore atrophied.

How to Reverse the Effect

So what can you do to reverse this effect?

One answer is to avoid stress and/or to find better ways of coping with it. Another is to consider taking up mindfulness meditation. Studies show us that mindfulness meditation can be highly effective in restoring the very parts of the brain that stress damages. In one Harvard study, it was found that participants who engaged in just 27 minutes of daily meditation would see significant increases in grey-matter density in the hippocampus. It was also found that they could improve many of the other areas of the brain that are damaged by stress – those that lead to risk taking behavior and poor emotional control and regulation.

More good news is that exercise also activates the brain’s hippocampus and improves white matter – the brain tissue that helps to ‘look after’ the grey matter and which may also help to speed up communication between brain cells. So if meditation isn’t your thing, then exercise can serve as an equally effective antidote to chronic or acute stress.