Impulsivity isn’t always a destructive trait. In some cases, risk taking behavior and a tendency to leap without looking can actually help us to function more effectively. People who take risks tend to be more successful in business, while some psychologists believe that our first decision is often our best one (as is postulated in the 2005 book Blink: The Power of Thinking Without Thinking by Malcolm Gladwell). Our emotions can often act as a guide that helps us to get a ‘gut feeling’ for what the correct decision may be, whereas overthinking can often just muddle the waters. 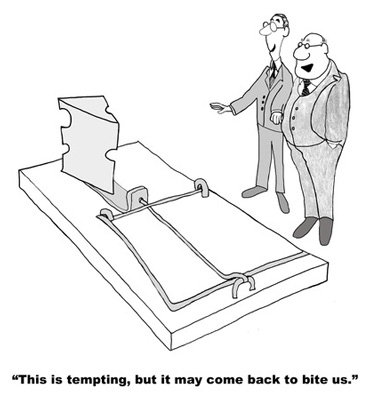 Unfortunately though, this is only one side of impulsivity. In other scenarios, impulsivity can lead to reckless behavior that is damaging to your relationships and your career and that puts you in physical danger. Impulsivity generally means that we have less control over our emotions and this can cause outbursts, fits of anger or sudden floods of tears. Impulsivity might also increase the likelihood of addiction and can generally cause us to get into trouble before we have had a chance to think through the consequences.

In its worst manifestations, impulsivity can even give us a sense of losing our autonomy. We know what we want to do and what we have planned to do and yet we often find ourselves taking other actions or falling back into old habits.

So what can you do to take control of this impulsivity and gain more control of yourself as a result?

The Mechanisms of Impulsivity

One way to better grasp impulsivity and how it might be regulated, is to look at the underlying physical mechanisms that cause it. One explanation, is that impulsivity is the result of an increased production of dopamine in the midbrain area called the striatum.

Dopamine is the neurotransmitter that regulates a lot of our behavior and is linked with reward. Dopamine is not produced as the reward but rather when we are working toward a goal oriented behavior. A certain amount of dopamine is necessary to ensure we are motivated then and that we will continue to strive toward goals and rewards.

Too much dopamine however can result in distraction, as multiple rewarding behaviors vie for our attentions. We may be motivated to finish work but we are also equally motivated to go downstairs and eat lots of chocolate.

Specifically, it appears that impulsivity arises from impairment to the dopamine autoreceptors – brain areas that control the firing of dopamine neurons and can therefore control the amounts of dopamine throughout the entire brain.

This is thought to be linked with adult ADHD, which also causes higher levels of impulsivity.

How to Reduce Impulsivity

So what can you do to get your impulsivity under control?

One thing to acknowledge is that lifestyle factors can have a big impact on our impulsivity and our ability to control our focus and behavior. Unfortunately, the world we live in is highly conducive to impulsive action and may even encourage ADHD-like symptoms. All our media devices are constantly beeping and flashing in a bid to get our attention and every time we succumb to them, we get a release of reward hormones that reinforce that behavior. We have become less patient and more accustomed to getting constant and immediate rewards.

We are constantly on the go and constantly switching our attention from one thing to the next – even sitting in front of the TV while scrolling through our smartphones. One of the best ways to reduce impulsive behavior then, is simply to slow down our pace of life and practice taking quiet moments.

A good way to do this is to take holiday and to have some time away from pressure and technology. This is also very useful if you are someone who engages in addictive behaviors – as one of the best strategies for avoiding addictive behavior is to change our environment and thus the prompts and reminders that trigger those actions.

The very best way to do this is with meditation. And research actually shows that meditation can help us to regrow the parts of the brain that are associated with self-awareness and regulation. This makes a lot of sense when you consider that the whole objective of meditation is to try and block out distracting thoughts while reflecting on our own mental state. Practicing meditation regularly can help you to be more aware of your feelings and emotions throughout the day, less stressed and certainly less impulsive.

Interestingly, research has also shown that exercise can help to trigger many of these same benefits and allow us to improve our physical brain structures in a similar manner.

Another tip is to practice being generally more mindful throughout the day. That means that you should take time to reflect on what you’re doing and why you’re doing it. Each time you switch tasks, get up from your chair or just make a decision, try to introduce an extra step where you stop and think about what it is you’re about to do.

Setting Yourself Up to Succeed

Finally, try to give yourself the best chance of success by ‘stacking the cards’ in your favor. That means making it easier for you to break destructive and impulsive actions by planning in advance.

For instance, if you are someone who spends money impulsively and you often find yourself splashing cash on expensive items during shopping trips, consider leaving your credit card at home and only taking the amount of money that you are willing to spend on that particular trip.

Similarly, if you are someone who is constantly raiding the cupboards for unhealthy treats, why stock them in your house at all?

This might seem like a short-term solution at best but it will prevent you from reinforcing those negative behaviors and thereby allow you to start wearing down your bad habits. The brain loves reward and that’s why it is prone to impulse. Fortunately, it loves routine and habit even more – create some positive ones!