Being able to take on constructive criticism is a useful skill and one that is well-worth cultivating. Being constantly showered with praise is of little use, as it doesn’t help you to identify potential mistakes you might have made, or to make adjustments to prevent them from happening again in future.

The question though, is when does that criticism cross the line and become unfair? And when that does happen, what can you do to deal with it?

How to Spot Unfair Criticism 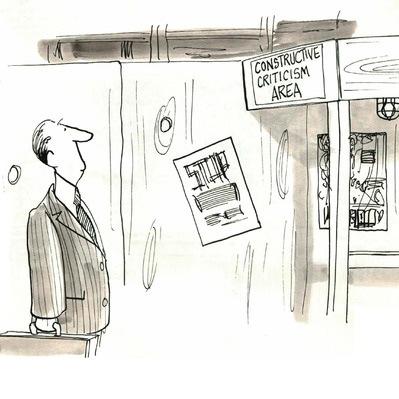 Criticism is unfair if it is not asked for, not constructive and not accurate. In other words, if criticism serves no useful function, or if it causes more harm than good, then you can consider it to be unfair. Likewise, criticism can be unfair if it is uncompassionate – if it ignores all the good and if it only focusses on the few things you did wrong. Or perhaps criticism is unfair because it fails to take into account the challenging circumstances that you faced.

In all these scenarios, the criticism is unfair because it is damaging and therefore unconstructive. In order to be considered ‘fair’, that criticism must have some kind of usefulness. Perhaps that usefulness stems from it helping to prevent future mistakes, perhaps it is expressing a warranted complaint, or perhaps it is being provided upon request.

In any other scenario though, criticism is purely destructive and that makes it ‘unfair’ in as much as it is undeserved.

Criticism of a work of art might be unfair for instance if it misses the point of the artwork, if it is purely subjective, if the artist never asked for feedback, or if the criticism is purely malicious and has no useful nuggets of information contained within. Likewise, criticism of a strategy in the workplace is unfair if the person providing the criticism fails to take into account the contribution of the person in charge, if they don’t provide a suitable alternative, or if they are purposefully being hurtful or disruptive (in which case, even constructive feedback can cause more harm than good).

How to Deal With Unfair Criticism

Unfortunately, most of us are going to have to deal with a large amount of this ‘unfair criticism’ during the courses of our lives. People tend to make criticism as an emotional response, rather than a logical or reasoned on, and as a result, they may not think of the consequences of their actions, or whether or not said criticism is warranted or fair.

This happens in small ways. For instance, if you have just cooked your partner a meal and they criticise you for not adding enough seasoning – without acknowledging the kind thing you did – then that could be seen as an unfair criticism. This likely comes from a place of tiredness and stress; your partner has had a long day and they simply reacted on gut instinct instead of thinking reasonably about how they might be making you feel.

Likewise, you may find yourself being criticised harshly at work by a colleague who is really just jealous or who perhaps doesn’t understand all of your responsibilities. Again, this is them lashing out because they feel insecure.

Compare this to logical criticism – which might take place in a much more controlled forum and only upon invite with the opportunity for discussion and debriefing. This is ‘fair’ criticism and it is not emotional.

Bearing this in mind then, the best way to deal with unfair criticism is simply to ‘rise above it’. This is surely easier said than done but it is possible if you commit yourself to a strict personal code. That code? To endeavor to live up to your own standards and to judge yourself according to your own merits – rather than to listen to the criticisms of others who might simply be emotional.

As long as you know that you have done all you can, then it shouldn’t matter what someone else thinks.

And note that I am not telling you to reject all and any criticism here. You should be listening to the criticism but you should only let it affect you when their criticism alters your own perception. If they have a point and you can see that point, then you can reassess how you might approach a similar task in the future. But if they’re just ranting emotionally? Then you know that their criticism has no value and you be content in the knowledge that you have met your own standards.

Like I say, this is all much easier in theory than it is in practice. It takes time and it takes practice. But learn to spot an emotional response and not to let it affect your own sense of accomplishment and you will be much happier as a result.