Panic attacks are highly stressful events that can be best describes as extreme stress attacks. Here the body goes into a severe ‘fight or flight’ response but mismanagement of those symptoms then exacerbates the situation to the point where dizziness, shortness of breath and a sensation of ‘unreality’ become common. 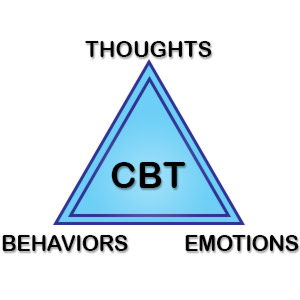 Panic attacks can affect anyone and in fact almost everyone will experience a panic attack at some point in their lives. The key though is to being able to recognize a panic attack for what it is and to manage the symptoms to prevent it from becoming a common experience – in which case it is known as panic attack disorder.

I don’t just say that CBT can be effective in treating panic attacks because I researched it or because I was taught it during my degree. In fact I have second hand experience of this particular condition as a friend of mine began experiencing panic attacks at one point while I was still on my course. That friend was also studying psychology however and when his doctor explained to him what was happening, he was able to use what we had learned about cognitive behavioral therapy to treat his own symptoms and cure himself almost instantly. My friend only ever experience two panic attacks before he managed to solve the problem – which is actually very uncommon.

In order to understand how to stop panic attacks, it can be useful to first address what causes them.

Essentially panic attacks come about when we experience stress and then exacerbate that stress by panicking about the stress symptoms. This then escalates the problem to the point where you can end up experiencing dizziness, feelings of ‘unreality’ and shortness of breath.

When my friend experienced his first panic attack, what actually made it so bad was that he thought he was having a heart attack. There is a history of heart attack in his family and one of the main symptoms that is commonly experienced with a panic attack (though not always) is a tightening of the chest. This is caused by muscle contraction and by rapid, shallow breathing but for the uninitiated the symptoms can feel very similar.

Of course those with panic attack disorder are likely to recognize the symptoms of panic attacks but here the fear is of the panic attack itself. Panic attacks can often be highly stressful, embarrassing and inconvenient and as such many people will panic when they start to notice the early symptoms of one coming on, resulting in escalating symptoms.

How to Stop Panic Attacks With CBT

In CBT, the idea is to look at the contents of your thoughts and to try and replace them with more positive ones. The underlying assumption here then, is that panic attacks are caused largely by negative ruminations and thought patterns that only serve to make the patient more worked up. Thus, CBT will use a process called ‘cognitive restructuring’ in order to help you to prevent those negative thoughts and to better cope with the situation.

This process can be broken down into stages. The first is mindfulness.

On the other hand, if you suffer from panic attack disorder and you are aware that your symptoms are brought on by an anxiety attack, it might be that you are actually thinking about the negative repercussions of the anxiety attack itself. You might be thinking ‘what if I fall over?’, ‘people are going to stare at me’ or ‘my friends will laugh at me or think I’m strange’. Again, this only serves to worsen the anxiety.

In cases where anxiety attacks are brought on by phobias, OCD or other disorders, you might be ruminating about the anxiety disorder, thinking that you’re going to fall or hurt yourself, that everyone is staring at you or that your house is going to burn down. Again, the more you think these thoughts, the more you work yourself up and the more you become likely to think more negative thoughts.

Mindfulness is a meditative practice where you are going to sit quietly and just listen to the contents of your thoughts as they pass by. By analyzing their content, you can get a good idea of the sorts of things you think regularly and how they might be causing anxiety.

Moreover though, mindfulness is something you should practice all the time. It simply means reflecting on the nature of your own thoughts in order to be more self-aware. You can even do this now: think back to the last time you have a severe panic attack and try to identify what thought processes were acting as the trigger there.

Next is cognitive restructuring which is the process of taking those negative thoughts and replacing them with more positive ones. By now you should be aware that simply thinking negative things is actually making you more likely to have a negative reaction and that is reason enough to not think them. Remind yourself: this isn’t helping.

At the same time though, you can also use some other strategies to change your thought processes.

Here you simply repeat positive phrases to yourself over and over again (in your head). While this might seem a little silly, the idea is that eventually these phrases can become almost ingrained and habitual so that you remember them whenever you start having an attack. These positive affirmations could be things like ‘I’m with friends who can look after me’ or ‘I have nothing to be afraid of’.

Thought challenging is something you will do in your quiet time when you are not having a reaction. Here you are going to challenge the contents of your thoughts and test whether or not there is really any truth behind them.

So for instance, if you find yourself thinking that you’re probably having a heart attack then ask yourself: was it a heart attack last time? Are you in any of the demographics most susceptible to a heart attack? Is your arm numb?

Likewise, if you’re worried about people laughing at you or being cruel if you have a panic attack in public then ask yourself – how likely is that really? What’s more: does it even really matter? Who cares what a stranger things about you that you’re never going to see again? If you breathe then a panic attack can be over in no time, so is it really that big of a deal?

Hypothesis testing means actually testing the underlying beliefs that are making you have the negative thoughts. In other words, if you’re afraid that people will laugh at you if you have an obvious panic attack in public… then maybe just try letting it happen. When you do this, you will almost always see that people are nothing but kind and helpful. If it happens enough, you’ll gradually learn that there really isn’t anything to be afraid of.

The final part of cognitive behavioral therapy is the use of techniques and tools you can use to combat your anxiety attacks. The main method for how to stop panic attacks here is with breathing techniques. Breathing techniques teach you to breathe more deeply and slowly rather than letting your breathing become faster and shallower. This not only prevents the change in blood carbon dioxide that exacerbates the symptoms of panic attacks but it also engages the parasympathetic nervous system – which is the best method there is to reverse the effects of fight and flight.

In conclusion then, you can use the following steps if you want to know how to stop panic attacks:

CBT is actually an amazing skill and once you have learned how to use it to combat panic attacks, you can then use it in many other areas of your life. If you struggle to treat the problem on your own, then you should see a professional cognitive behavioral therapist who will talk you through the process more thoroughly.