If you are suffering from panic attacks, then you may be willing to consider every avenue when it comes to getting treatment. One option you might have come across is hypnosis. But can hypnosis really work?

How Hypnosis for Panic Attacks Works 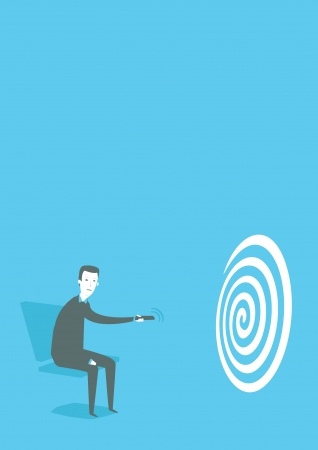 If you are suffering from panic attacks, how would a hypnotist go about addressing the problem?

First, it may be helpful to consider how hypnosis works generally. Essentially, the idea here is to bypass the conscious thought processes of a patient’s mind in such a way that they can speak directly to the ‘unconscious’.

As we go through our day, our feelings and actions are very much determined by beliefs that we hold under the surface. For instance, when you interact with someone, your confidence or lack thereof will play a big role in the outcome. Likewise, when you go running, a belief that you might trip will make you much more likely to trip.

All kinds of fears and anxieties then can trigger panic attacks and many of them are beliefs that we hold on an unconscious level – that we’re not even aware of.

If a therapist, a doctor or even a friend were to tell you that you had no reason to be afraid of wide open spaces though (for example), then you would likely not really believe them. Likewise, if someone tells you that you’re witty and charming and you should be really confident, that doesn’t make you confident overnight. These are beliefs that have to come from within.

The objective with hypnosis and hypnosis for panic attacks is to tell you things that you will believe by bypassing that critical and cynical conscious mind and going straight for the unconscious. Think ‘inception’. To do this, a hypnotist first puts the patient in what is known as a ‘suggestible state’ which effectively means they’re awake but aren’t consciously aware of where they are or what’s being said to them.

Meanwhile, the hypnotist will have established themselves to be an authority and will then use cleverly designed language (‘suggestions’) to further persuade you believe them. This will use techniques like presuppositions often, rather than directly stating what they want you to believe.

One problem with seeing a hypnotist (even presuming it would be effective) is that it can be expensive. An alternative option then is to consider self-hypnosis. This can be done in a number of ways, with the most popular option being to listen to a ‘script’ or even to play subliminal messages while falling asleep.

These strategies aren’t as effective however as they don’t have the ability of a real hypnotherapist to react to the way you respond (or don’t) to the script. Likewise, they don’t have the advantage of props and procedures to help get you into a more suggestible state.

Still though, self-hypnosis is free and is relatively easy to try, so there’s no reason not to use it.

Does Hypnosis for Panic Attacks Work?

The big question though is whether or not hypnosis actually work. The answer to that is unfortunately somewhat complicated.

In some ways, there is no question that hypnotherapy is ‘real’. Suggestible hypnotic states are something that can actually be measured with brain imaging and some studies likewise suggest that it can be effective in treating things like eczema even (1).

At the same time though, other studies fail to provide evidence that hypnosis is effective in treating anxiety (2). There are big methodological problems when it comes to testing whether or not hypnotherapy is effective. Normally in studies, the method is to use a control group and to compare the results of a particular intervention with the results accomplished through placebo (sugar pill).

But in the case of hypnotherapy, what you’re really looking at is placebo. Just as with a sugar pill, the whole reason hypnosis works is because it gets people to change their beliefs about themselves and about their condition. In a way, you could even describe hypnosis as a form of procedural placebo.

A more common form of treatment for panic attacks is something called CBT or ‘cognitive behavioral therapy’. This is a form of therapy that teaches you to become more aware of your own thoughts and your own underlying beliefs and to systematically change these using ‘cognitive restructuring’. This then involves thinking more logically about your own beliefs (thought challenging), testing their validity (hypothesis testing) and using positive affirmations and breathing techniques.

Combined, the techniques employed by cognitive behavioral therapists can achieve the same ends of helping a patient to alter their beliefs and thus overcome fears and anxieties. There is a much larger body of evidence supporting the effectiveness of this approach and it is generally thought to be equally effective on all patients.