Most people dread old age. They recall grandparents in their final years and shudder to think that it will soon be their turn. And yet so much of this suffering is self-inflicted. Everyone experiences problems, of course, and everyone ages and dies, but the process can be made a great deal less painful by a few simple changes. 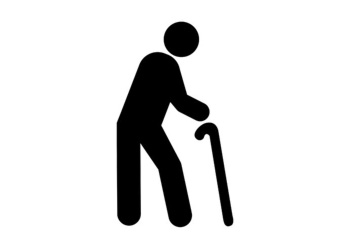 First, do not assume nothing can be done about the ageing process. People may shrug their shoulders and say “well, it’s natural,” but this merely excuses their poor diet and lack of exercise. Others say ridiculous things like “who wants to live forever?,” or “you’ve got to die of something.” But, again, no one is saying that a brisk walk and a few extra vegetables will bring immortality! The point is to improve your quality of life.

It is important to recognise that the majority of illness and disease suffered by the elderly is self-inflicted. Such an idea is met with skepticism and contempt because it is easier. If you accept that you can actually do something about the ageing process, it means giving up chocolate and cookies and taking lots of horrible exercise.

In The Age Revolution, Charles Clark, himself a medical doctor, writes “most of the processes of ageing are actually a result of the way we live and are not inevitable,” adding that the specific conditions associated with ageing, such as strokes and diabetes, are in fact “determined more by our lifestyle than by age.” Clark goes on to say that even medical professionals often seem oblivious to this, thus reinforcing the myth that there is little you can do.

Your priority should be to remain mobile and active. Immobility often lies at the root of so many complaints, from strokes and heart disease to loneliness and depression. Begin by taking extra care never to fall and break something. A broken hip or smashed knee will cause no end of pain and hassle. Even if the repairs succeed, it will slow you down. As you age, the body takes longer to recover from such shocks. And if the break proves difficult to treat, it means a less active lifestyle, which means weight increase, thus bringing still more health problems.

So be careful. Don’t go walking on an icy or snowy day. And be wary of leaving things laying about the house and then tripping over them. Whenever possible, walk across grass rather than concrete; that way, should you fall, it is less likely to result in broken bones. And consider your footwear: buy sensible, flat-soled shoes, or shoes with plenty of grip. And, finally, buy some impact-softening accessories to wear on your wrists and knees.

It is also vital to keep your weight down. Take regular, gentle exercise and cut down on alcohol and junk food as well. Being overweight will not only slow you down and make it harder to move, it will also put pressure on your knees and ankles. And being overweight also leads to circulation problems. That in turn results in infections and even amputations, which obviously causes even greater mobility problems.

Loneliness is another common complaint. Children move away, or are preoccupied with their career and family, old friends die, and so on. Plus, new technologies, from DVD box sets to the internet, mean people spend increasing amounts of time indoors. You don’t need a sociologist to describe the consequences. Quite simply, where people would once have gone to the local pub or bar for a drink and a sing-along, they now spend their evening surfing the net and playing computer games.

Unfortunately, many elderly people seem to believe others have a responsibility to befriend them. Indeed, many will bitterly complain, even sulk, about how lonely they feel. But no one owes you anything. The elderly can be their own worst enemy, assuming they are somehow entitled to affection and respect. It just doesn’t work like that.

If your grandchildren never visit, or friends have not bothered to stay in touch, ask yourself why. Could it be your fault? Not only should you make more effort to get out there and socialize, you should also make an effort to be good company. This is especially true when dealing with the young. Time and again, elderly people speak of the young with contempt, droning on about how feckless, lazy, and spoilt they are. It should hardly need pointing out that your grandparents probably spoke the same way about your generation, and that their grandparents spoke like that about them.

When you encounter a young person, do not spend time telling them how awful the modern world is, or how much better everything was when you were young. Some elderly people do so and then have the nerve to complain that the young are unfriendly! What do they expect? Treat them with respect, listen to what they have to say, be curious and interested, ask them to introduce you to the latest gadgets or music, etc, and you may be surprised by the result. Above all, do not patronize them.

More generally, you must put yourself out there. You can read books on how to meet people and make new friends, but your loneliness will only end when you make the effort to meet new people. Be prepared for setbacks, however. There will be times when you come home feeling worse, when you failed to connect with a single person at the local bar or reading group. Don’t give up. No matter what your age, it isn’t easy to find people you like. So keep trying!

According to the National Council on Ageing, the top five illnesses experienced in old age are hypertension (or high blood pressure), high cholesterol, arthritis, heart disease and diabetes. Aside from the sheer discomfort, such illnesses restrict mobility and lower mood. Fortunately, a great deal can be done to prevent, manage and even reverse them.

Hypertension is the single most common chronic illness to affect the elderly. Aside from the obvious, like keeping your weight down and taking gentle exercise, you should reduce your intake of salt, sugar and refined carbs. And increase the amount of green vegetables, fresh fruit (not tinned), and unsalted nuts. Also, eat at least two bananas and four sticks of celery a day; these are rich in potassium and have been shown to lower blood pressure. Garlic is also excellent. If you dislike eating it with food, buy a good quality supplement.

Cholesterol can be controlled by reducing the amount of animal fats and full-fat dairy you consume. Also, avoid anything containing hydrogenated or trans-fats. Eggs and refined carbs (white bread, donuts, croissants, etc) should also be kept to a minimum. Again, take regular exercise and eat plenty of fresh fruit and vegetables. Many supplements are useful, in particular grapefruit pectin fibre.

The key to fighting Rheumatoid Arthritis is to reduce inflammation, so eat a plant-based diet and take supplements like fish oil, bromelain and turmeric. Pineapple, avocado, ginger tea, and green vegetables may also help. Again, keep your weight down. If you dislike pineapple, by the way, bromelain tablets have a similar effect.

Your chances of developing heart disease are hugely reduced if you simply quit smoking and drinking and go for a gentle, two mile walk every day. You should also cut down on the saturated fats found in meat, butter, cheese, cream, etc. And cut down on sugary snacks like donuts and chocolate cookies. Fried food is another major problem. Heart surgeons literally find fat from fried food in the arteries of their patients.

Finally, there is diabetes. As with heart disease, genetics often plays a part. But you can still reduce your chances of developing it. Again, reduce sugary and junk foods and replace them with lots of fresh fruit and vegetables. The single most important thing you can do is lose weight. If you are out of shape, begin with a gentle walk around the block. And, as the weeks go by, increase the pace and distance.

Finally, there is the dreaded “D” word – depression. Depression among the elderly is hugely under-reported. In part, this is because carers, and even the elderly themselves, accept it as inevitable. An additional problem is that those now in their 70s and 80s grew up in a world in which people were less aware of mental illness. Such things were rarely discussed, and were even considered shameful.

Another problem is that elderly people sometimes feel they don’t matter. Since the future lies with the young, and society depends on those who work and pay tax, elderly people feel it unfair to “make a fuss.” But depression, like any illness, will only grow worse if left untreated.

Diet and exercise make a big difference to one’s mood. So eat plenty of fresh fruit and vegetables, plus nuts, seeds, and oily fish. And reduce your alcohol intake. If possible, get out of the house every day. A brisk walk in natural light will do wonders for your mood. Best of all would be a gentle activity, such as golf or bowls, that gets you outside and involves other people.

Never underestimate the impact a few simple changes can have. You are fortunate to be living in the information age. Take full advantage of this. Whatever your complaint, research it online. You may be surprised by how much can be done.