If you observe people in disagreement, you will notice that most slip into certain modes of being: passive, passive-aggressive, aggressive or assertive. Often, they will alternate between the four during a single argument. In fact, most human interaction, whether between friends, colleagues or even lovers, involve all four. 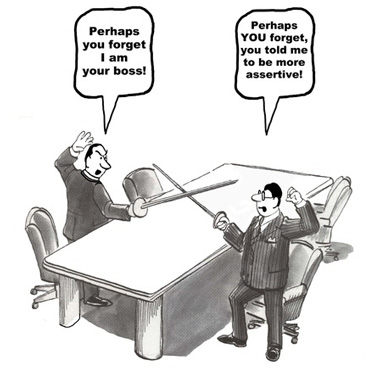 So what is assertiveness? Assertiveness can best be understood in contrast to other ways of acting. Obviously, the assertive person does not behave in a passive manner. Passive individuals never take control of a situation and will allow others to bully and dominate them. In a relationship, the partner of a passive individual may complain that they never choose the vacation or stand up to their rude teenage son. Passive-aggressive individuals are different. They lack the will to be assertive or aggressive, so they hide behind certain behaviour patterns: sulking and sarcasm are classic examples. Aggression can be harder to distinguish from assertiveness, and at times the line between the two is very fine. An aggressive person seeks to dominate. They view arguments or disagreements, and sometimes even relationships, as battles to be won. Contrary to popular belief, aggression is often a sign of insecurity and low self-esteem. The assertive do not seek to dominate, neither will they allow themselves to be dominated. Where the aggressive person screams and shouts, the assertive individual calmly states their problem, then refuses to back down.

If you wish to be more assertive, begin by changing your body language. Never hunch your shoulders or look down at the ground. Assertive people keep their shoulders up and back, their chest out and their chin up. They look people in the eye, but not in an aggressive, threatening manner.

Next, consider how you communicate with people. Never shout. Indeed, avoid raising your voice altogether. Where the passive woman mumbles and looks at the ground, and the passive-aggressive mutters a sarcastic comment under her breath, the assertive woman keeps her tone measured but her voice firm and clear.

Assertive people never backtrack on what they have said. For example, an assertive person may be asked to give someone a lift to the airport. They may feel this is unreasonable, that it is too short notice, that they are being exploited and taken for granted. An assertive person will say “I’m afraid I can’t. I am busy that day” and add nothing more. Unassertive people follow up such statements with endless apologies and explanations, sometimes talking themselves into doing what they don’t want to do. Say what you need to say, and do so calmly and politely. But leave it there. If the person you are talking to won’t take no for an answer, simply repeat yourself.

Assertiveness flows from healthy core beliefs. If you believe you deserve to be treated with respect, and that your feelings and desires matter, you will act assertively.

Finally, remember to practice. This does not mean that you should seek out conflict or confrontation. However, take notice of how you walk and stand. When you walk along the street, do you slouch your shoulders? Do you avoid eye contact? How clearly and firmly do you speak? If you ask for something in a shop, make a point of speaking up and looking the shop assistant in the eye. Once again, it should be stressed that this does not mean be aggressive. When you ask for a packet of cigarettes, smile and say please, but do so loudly and firmly.

Some people are assertive by nature, but for most it is a skill to be learned and perfected. And the more assertive you are, the healthier your interaction with others will be. Far from making you obnoxious or offensive, assertiveness is usually welcomed and admired.