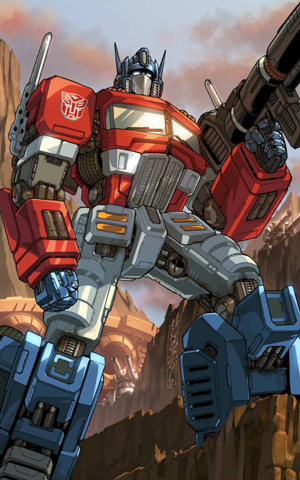 For me personally, a number of fictional characters played an important role in my childhood. After losing my Dad at a young age, I turned to fiction to find surrogate role models and found myself looking up to characters like Iron Man, Spider-Man, Optimus Prime and Sonic the Hedgehog. But it’s not just me that fiction can have a big impact on – often I’ll be watching Downton Abbey or some other program with my girlfriend, only to turn around and find her crying because one of them has died or become ill (or started cheating on their wife with one of the maids as characters at Downton are wont to do…).

Of course we all know that these characters aren’t real, and that the stories they inhabit never really happen… so why is it that we can be so moved and so affected by those characters? What does it tell us about our psychology? Read on, and let’s take a look at what moves us to care so much about things we know aren’t real…

It Just Has to Move

What’s even weirder than caring about Optimus Prime or Mary from Downton though, is finding yourself caring about a small circle on a computer screen; but this is actually completely possible as anyone who has ever played Pac-Man will know…

Actually, all it takes for us to ‘care’ about a character is a sense of ‘agency’. This comes from our evolutionary tendency to (mistakenly) project our own thoughts, motives and emotions onto other people and things.

If we see a square on a black screen bouncing around that screen aimlessly, then we will presume that it is just a program and won’t assign any emotion or purpose to it. However, if that movement seems more deliberate, then we will automatically assume it is moving with reason – and that’s when we attribute it with ‘agency’. What’s really interesting though is that our brain does this based on an algorithm – so the same white square can seem either alive to us or not, based ultimately on the mathematics and scripting behind its movement. We can find ourselves rooting for it, caring for it and helping it: without even really knowing why.

Studies suggest that when something moves in a certain way – based on in-built algorithms – we assign it agency and react to it as though it were a living thing: even when we know that not to be the case.

This then extends to empathy – which is controlled by ‘mirror neurons’ in our brain. When we see someone happy, upset, or victorious, neurons fire in our brain in accordance with that and we feel some of those same emotions. This is all part of an evolutionary mechanism that is simply in place to help us work as part of a wider community and to get along with others (which is crucial to our survival). This works best if said character has a face – as that’s where we denote most emotion from (though an ‘estimation’ of a face works well too). Then again, even without a face you might find yourself feeling somewhat upset when that little square who seems to be working so hard to collect coins… is ultimately destroyed…

If you can care a lot about a little white square getting obliterated then, there’s a good chance that you’re going to naturally care about a character on the screen who looks and acts real and who seems to be well intentioned.

But then some characters can look real, and have clear agency… but actually be quite unrelatable. Take for instance the bad guys in most films. I don’t think anyone was really crying during the Dark Knight when the Joker got arrested – and if they were then they need rather immediate psychiatric attention.

The point is that when we identify a character as having human objectives, we are then genetically programmed to decide if we like them and if we can trust them. Psychologists break this down into three facets of attractiveness: physical attractiveness, social attractiveness and task attractiveness. That means that we’re most likely to care for an on-screen character who we think looks nice (that doesn’t necessarily mean sexy – it can equally mean attractive in a Pikachu sense), who we think is friendly and easy to get on with, and who is able to help us accomplish our goals.

It’s easy to imagine why we might have evolved this way – as liking these kinds of people would have helped us to survive by getting things done and avoiding arguments/poor health (physical attractiveness is very much tied into our health).

All of this is what works in the real world to make us care about everything from our little car (that seems to show agency when it chooses not to start in the morning and thus acquires a ‘personality’), to our hamster, to the hot girl/guy in our office, to our Mums (who help us get a lot done). But film directors, novelists and games designers have a few more tricks up their sleeves that they can further use to help us care for their characters.

One is music. The power of music lies in its ability to ‘entrain’ our body, causing our heart rate to synchronise with the beat and affecting our mood through pitch and melody. It is thought that this response to music has also evolved from our need to interact socially with others, and that it might be a ‘side effect’ of our predisposition to understanding language.

Another is to make other characters care about the characters who you want an audience to like. When we see someone responding well to someone else, it sends a social signal that that person is likeable, and that we should probably like them too (as they might be able to help us also). At the same time, those mirror neurons will fire helping us to feel the same emotions as those characters towards the main protagonist. When something bad happens to the protagonist, showing the other characters’ reactions can help serve as a ‘cue’ to tell the audience how to respond.

Finally, another trick that character designers use is in making the heroes look and act like children. I mentioned Pikachu earlier, but what you might not have realised is that his is a character that has been designed to make us react in the same way that we might react towards a child.

We are genetically predisposed you see to care about children, as it is once again adaptive for the survival of our genes. Thus we respond well to anything with child-like proportions such as large eyes, larger heads and squat bodies. If you want to make your character ‘cute’ and give the audience a desire to protect them, then those are all the features they will need. Even inanimate objects can be cute if they follow these rules.

But if all of this empathising can be so easily predicted and calculated, then why is it that different people care more about different characters?

Well there are a couple of reasons for this. One is the fact that we tend to like people and things that are more similar to us. Again this seems to be an evolutionary response – the purpose being to ensure that our offspring are more similar to ourselves. Thus if you and your girlfriend watch a TV program, then the two of you are likely to identify the characters that are most like each of you.

Another factor is experience. Automatically when we encounter new stimuli, we will base our reaction to that stimuli on previous experiences. In short then, if someone in a game reminds you of someone that you have known in real life, then you may feel warmer or colder towards them automatically.

But there is something deeper than all that going on here too – which is to do with our human need to seek out basic experiences, to feel understood and to feel companionship.

For me a human need was the need for a Father figure, which helped me to find comfort in certain fictions. For others it might be simply the need to be understood and to find others like you. Perhaps someone who feels different, or outcast, could empathise with a character like the X-Men or Harry Potter – and perhaps reading about other people going through an analogous experience could even be therapeutic.

So next time you find yourself (or your girlfriend) crying in front of the TV don’t feel foolish – it is all a part of what makes you fundamentally human.