Getting into a new relationship is an exciting time and magical even, but it’s also something that shouldn’t be taken lightly. When you get into a relationship you will be placing a lot of hope in it going well and staking a lot of your emotional well-being on it. At the same time, the other person will be doing the same thing and it’s your responsibility to them to make sure you’re ready to give them what they’re looking for before you enter into that relationship blindly.

If you’ve just been in a serious relationship, if you’re currently caught up in work, or if you have serious emotional issues, then you might not be ready to begin a new romantic partnership. Read on and we’ll take a look at some of the things you need to be sure of before you go ahead and accept that offer to ‘be exclusive’.

One of the most important things to be sure of before moving into a new relationship is that your last relationship isn’t going to be a spectre over your future happiness. If you’ve recently been in a relationship and went through a messy breakup, then you might be tempted to throw yourself into someone new in order to try and get back some of the feeling of closeness that you had with that last person. This is an understandable impulse and it can be lonely being single after a long time with someone else… but it could also mean that you don’t end up making the best choices and end up moving too fast with someone who isn’t right for you. 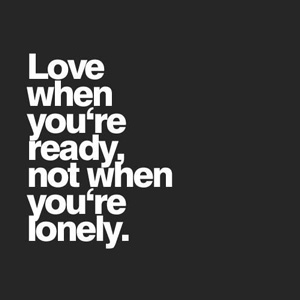 The solution is not to turn down an opportunity to be happy with someone new, but instead to just take it more slowly thereby ensuring that you aren’t rushing into anything and being misled by upsetting emotions.

That said, if the breakup was so recent that you can’t stop talking or thinking about your ex then you might be better off waiting until you’re ready for commitment to pursue a new relationship.

Another important thing to ensure is that you are happy being on your own. This might sound counterintuitive, but if you desperately want to be in a relationship then you probably shouldn’t be in one yet…

For many people it’s normal to jump straight from one relationship to the next without spending any time single. For some, relationships will even overlap, meaning they don’t get even the slightest respite from being in a partnership.

While this might seem okay on the face of it, it does unfortunately mean you’re likely to end up too dependent on your relationship for your happiness. Not only is this a recipe for disaster as far as your relationship goes, but it can also be devastating for your self-esteem and happiness if all doesn’t go as planned.

Furthermore, it’s crucial to spend time alone in order to know ‘who you are’. This will ensure that your personality doesn’t get smothered by the other person, and it will help ensure you are able to steer the relationship in a direction that you are happy with and that benefits you both.

They say that ‘those who are happiest apart, are happiest together’ – and there’s a lot of truth in that statement.

There are many personal issues that can stand in the way of your relationship going well. For instance, if you are someone who is insecure, someone who is depressed, or someone who has crippling anxieties, then you might want to focus on yourself before you enter into a relationship.

The problem is not only that issues like this can potentially prevent a promising relationship from working out (as your issues will quickly become someone else’s), but also that it will be unfair to expect someone you date to deal with your issues and essentially take on the role of your ‘carer’. A relationship should be an equal partnership, and if you require ‘looking after’ then you will upset this dynamic, this will then negatively affect the relationship and your partner’s happiness.

Obviously everyone has issues of some sort and everyone has baggage. But if you’re in a place where you’re struggling to function normally on your own, then you shouldn’t think about getting into a relationship yet. A relationship shouldn’t be used as a way to ‘make up’ for problems in other areas. Again, if you’re in a bad place when that perfect someone comes along, you should just make sure to take it slowly. If they really are the right person, they’ll understand.

Finally, think about the place you’re in in terms of your lifestyle, in terms of what you want to achieve and in terms of where you’re likely to be a year from now. The unfortunate reality is that some of us just don’t have time for a serious relationship, while others just won’t see it as the number one priority. If you are more interested in focusing on your career right now, or if you want to travel the world, then this isn’t a good time to get into a relationship. Doing so will only likely mean heartache for both of you. The only potential mitigating factor though is if you are ready and willing to sacrifice your plans in order to focus on that relationship.

So next time you’re considering starting a new relationship you need to consider all these factors and ask yourself some probing questions. At the same time, you also need to ask the same questions of your prospective partners. Are they ready to be in a relationship right now?