Those of us who have an interest in the human mind might be almost envious in a way of those who have experienced hallucinations. I would never recommend the use of mind altering drugs – personally or from a psychological standpoint – and no matter what anyone tells you the consequences of ignoring that advice can be incredibly severe. Nevertheless, the thought of breaking down mental barriers and seeing what lies behind your veil of sanity is one that’s certainly intriguing to the curious mind and it’s something that a lot of people would like to experience.

Fortunately though, you don’t need to take drugs to experience hallucinations, and in fact there is one way to do so that’s completely free, completely safe and completely legal. In fact it is one that has been used in meditation and religious practices for centuries and it’s one you can try right now. Read on if you want to hack your brain in a way that’s safe and responsible. 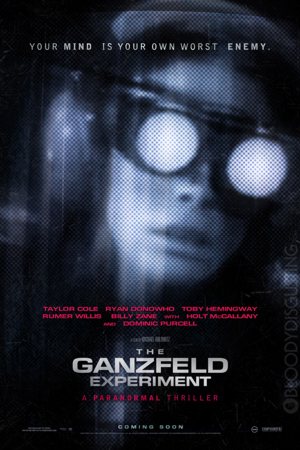 The process we’re going to use here works due to something called the ‘Ganzfeld effect’. This is a phenomenon of perception that is caused by prolonged exposure to an ‘unstructured’ yet uniform stimulation. Usually this involves covering your eyes with a paper mask or with halves of a ping pong ball and some tape. At the same time you should lie down and listen to white noise in headphones… or you can pay thousands to spend some time in a sensory deprivation tank.

After a short amount of time this then causes you to start experiencing visual and auditory hallucinations which can vary from geometric shapes and random noises to more complex vivid imagery. Once you’ve had enough of dancing blobs, simply remove the mask/headphones and return to normal with no lasting effects.

Now you might be a little alarmed that all it takes is some ping pong balls to make you start seeing things, but the explanation is actually rather simple.

You see, the human brain is designed to look for stimulus and to try and make sense of what it sees. We’ve adapted to be on the constant lookout for movement and for sounds that might be relevant to our everyday lives and useful for our surviving/thriving. Thus, when you deprive the brain of useful stimulation a couple of things happen…

First of all you will notice that your vision dims and that the white you’re staring at doesn’t appear as vivid or defined. This is due to something called ‘neural adaptation’ – the same neurons have been firing in response to those cells in the brain for some time, and now they’ve become desensitised to looking at the same thing.

Next you might start to notice blurring and movement, and the reason for this is that the brain is going into overdrive to try and pick up some stimulus. It goes into hyperdrive essentially to try and do something useful and as such it starts creating its own images and picking up on things that aren’t really there. The same thing happens to your auditory areas and thus you start hearing things too.

You may now be wondering why you can’t just close your eyes and the reason for this is that you still need to be able to see in order for the effect to work. Plus there’s always the danger of falling asleep.

In the interests of journalistic integrity, I thought it would only be fair for me to have a go at this kind of deprivation myself. Thus I just spent the last half-hour lying on the couch with a white sheet over my eyes (double folded and raised slightly) and white noise playing via an Android app in my ears. Here’s what happened…

First of all, it didn’t take long at all for my vision to start going blurry – no more than two or three minutes which surprised me. Then only shortly after I started to see patterns and I can best describe this as the kinds of patterns you get when you push down on your eyes or when you stare into the darkness. This was no transformational experience or anything that you could read any meaning into.

Over time though these patterns did increase in intensity and I found that it was interesting that neither blinking nor looking around interrupted them. It was a bit like how I imagine being blind might be. The swirling got pretty intense and what was odd was that they all seemed to go into my mouth when I breathed in. Presumably that was my brain linking them to what stimuli it had (the feeling of my breathing), but it’s already easy to see how someone might interpret this and give it a narrative.

Something else interesting was that I had a nervous feeling that there was someone standing over me which was quite disconcerting. I initially ignored this, assuming it was just because I had the creeps a little before I even started (I’m a wuss). However, when I later read experiences that other people had, I found that this was quite a normal thing to experience – and it is consistent with hallucinations that people often get when waking from dreams for instance or experiencing ‘sleep paralysis’. It might also have been to do with the fact that I knew where I was but couldn’t see anything – perhaps there is a survival instinct here to ‘wake up’ and check that you are indeed safe.

The swirling carried on for ages and to be honest was really pretty boring. Towards the end I had something a little more interesting, which was an image of a mountain and even an auditory hallucination of wind in the white noise. The mountain wasn’t particularly vivid then, and I’d best describe it as being like imagining but slightly more ‘real’.

So that was that. I have to say that if you’re hoping to go on a ‘trip’ and to emerge enlightened then you will probably be disappointed. However, if you’re interested in the human brain and in how optical illusions work and how the mind tries to assign meaning where there is none, then it’s worth checking out.

This might sound like a very ‘internet’ thing to do, but actually humans have been using the Ganzfeld effect for centuries. ‘Wise men’ and shaman types in many cultures for instance would often retreat into dark caves in order to receive wisdom from their hallucinations, while meditation is in many ways designed to achieve a similar effect.

This also explains why some Arctic explorers describe having vivid hallucinations and even seeing ‘ghosts’ when they’ve been trekking through the environment. The understanding is that snowstorms cause hours of sensory deprivation where all they can see is white and all they can hear is howling wind. This can eventually cause similar hallucinations to the experiment described above.

It also gives us interesting insight into the way that hallucinations work in general. Your brain fires when it shouldn’t for whatever reason, causing you to see a shape or hear a noise. While these are normally rather abstract, it’s in clutching to interpret these that those shapes and noises become ghosts, angels and messengers. The brain is an amazing thing, but it’s times like this that we get to see its limitations and how even all that grey matter can occasionally get things a bit wrong…