Few writers have been so influential on the art, literature, and philosophy of the last century as Friedrich Nietzsche. Along with Marx, Darwin, Freud, and Einstein, his writings shaped the intellectual landscape of the 20th century. Proust, D. H. Lawrence, Oscar Wilde, and even Freud would have produced wholly different work had they never encountered this German philosopher’s ideas. Even today, there are many who hold him personally responsible for European fascism and the rise of Hitler. 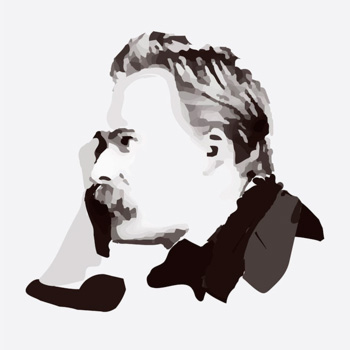 Nietzsche was born in Saxony, northern Germany, in 1844, to a family with strong connections to the Protestant church. He attended Schulpforta, a famous private school, from 1858 to 1864, and then began a degree in theology and philology at the University of Bonn. In 1869, he became a professor of philology at Basel University in Switzerland.

During the Franco-Prussian war of 1870, Nietzsche volunteered to serve as a medical orderly. After he caught dysentery, he returned to his post at Basel, and then retired on grounds of ill-health in 1879. For a decade, he drifted around Italy, Switzerland, and France, writing and thinking.

The end of Nietzsche’s life has been somewhat over-romanticised. In 1889, he is said to have watched a farmer beating a horse in the streets of Turin, rushed over to the animal, flung his arms around its neck, and collapsed. Admirers like to believe he was broken by the weight and profundity of his ideas, and by his destiny as prophet of a new age. In fact, Nietzsche’s ill-health was almost certainly due to syphilis, which he caught in a brothel as a young man. Physically and mentally broken for the last 10 years of his life, he died in 1900.

Nietzsche’s whole philosophy could be understood as a reaction to another German philosopher, Arthur Schopenhauer. A cynic and pessimist, Schopenhauer believed that everything, humanity included, is driven and animated by a blind, irrational will. This “will” is not a guiding intelligence with a specific goal, but rather, something closer to the physicists’ notion of energy. Under its influence, people steal, rape, lust, and shove one another side.

Though Nietzsche was impressed by such unflinching honesty, he came ultimately to reject Schopenhauer’s philosophy as life-denying. For Schopenhauer, life “should never have been”; it was a mistake, a painful, meaningless tragedy. The only hope was to turn away in disgust and seek solace in the passive contemplation of beauty. In such aesthetic moments, the will could be escaped. To Nietzsche, this was a sick, cowardly way to respond.

While many 19th-century writers and intellectuals ceased to believe in Christianity, for Nietzsche, Christianity was not merely untrue; he concluded that no ultimate truth existed anyway, only different perspectives. He felt that Christianity should be discarded, not because it was untrue, but because it was a rotten, corrupt, indecent religion, a trick played on the brave and strong by the stupid and weak.

Nietzsche argued that all human activity and history is driven by a “will to power.” In all societies, the brave, clever, and strong dominate the cowardly, stupid, and weak. That is the natural order of things. And if everything is a matter of perspective, wrote Nietzsche, that includes morality. To the warrior-aristocrats of Homer’s Iliad, “good” (agathos) did not mean kind, gentle, meek, and mild; on the contrary, it meant fierce, proud, brave, beautiful, and rich. A good man won fame in battle, instilled fear in his enemies, and accumulated war trophies. Christianity was a religion preserved and maintained by the “rabble” or “herd,” and its morality, Nietzsche believed, was a “slave morality,” one which redefined good and evil to make the strong feel ashamed of their power, wealth, and strength.

For Nietzsche, there was no absolute truth independent of human perspective, since no one can get outside their own limited consciousness and see reality with a God’s-eye view. Therefore, only one question need be asked of a belief system: not, “is this true?” but “is this life-affirming or life-denying?” Nietzsche saw Christianity as the latter, that it teaches that the physical, material world is sinful, fallen, and illusory, and that true reality lies somewhere else.

His Fear of Nihilism

“A spectre is haunting Europe,” Nietzsche wrote, “the spectre of nihilism.” Nietzsche found the Christians of his day insufferable. Many of them, he argued, no longer truly believed, and church attendance was one more routine, conducted without passion, commitment, or faith. You see this at its worst, he argued, in England, where churchgoing was just another bourgeois ritual, like high tea; Christianity had become sentimental, middle-class morality. But if you cease to believe in something, Nietzsche asserted, you must ditch it, root and branch. You cannot hold on to the moral code when you have ceased to believe in the metaphysical claims.

But what will happen when the majority cease to believe in a supernatural authority? If there is no guiding intelligence beyond or outside of humanity, nothing humans can turn to, and nothing to lay down laws on how they should live, might this realisation lead to despair? As people think this through, Nietzsche argued, they will conclude that since there is no divine authority to provide a set of moral laws, all systems of belief and morality are relative. Nietzsche set himself the task of filling the nihilistic void left behind.

For Nietzsche, the question should not be what will fill the void but who. A new kind of individual must emerge from the wreckage of Christianity: the Ubermensch, loosely translated as “over man” or “man who overcomes.” People often misunderstand this concept and assume Nietzsche meant a physical improvement, a being that will evolve beyond homo sapiens, just as homo sapiens evolved beyond the earlier primates. However, this is wrong. Physically, Nietzsche’s Ubermensch would be no different to the people of his time.

Rather, the Ubermensch will be an extreme individualist, rejecting all belief in a higher, better, other-world, whether that be a Christian heaven or the realm of Platonic Forms. He will live here and now, in the physical, material world, and glory in it. Far from seeking to gain power over others, he will never interfere, judge, meddle, or condemn. His sole concern will be with self-growth, self-exploration, and self-perfection. In quest of this self-realisation, he will be a “yes-sayer,” trying everything and embracing all new experience. Experience will replace faith.

Rather than rejecting the will, as Schopenhauer advocated, the Ubermensch will harness its power, thriving on the energy and drive. Of course this will bring suffering, but suffering itself will be embraced as an opportunity for self-discovery and artistic creation. Without suffering there can be no true beauty or art. As Harry Lime says in The Third Man: “… in Italy for 30 years under the Borgias, they had warfare, terror, murder, and bloodshed, but produced Michelangelo, Leonardo da Vinci, and the Renaissance. In Switzerland they had brotherly love — 500 years of democracy and peace, and what did they produce? The cuckoo clock.”

The Ubermensch will live with the truth. He will accept that all moral codes, all sets of belief, are a matter of perspective, that there is no ultimate truth or higher authority. Put another way, he will live with the fact that his existence isn’t for anything, that in a philosophical sense, it cannot be justified. He will accept all this without sinking into nihilistic despair.

It is when writing of the Ubermensch that Nietzsche introduces his notion of the “eternal return.” Imagine, he writes, a demon whispers in your ear that this life you have lived must one day be repeated, over and over again, all its terrors and miseries gone through once more, without hope of changing a thing. Most humans would react with horror. The Ubermensch would laugh in the demon’s face and welcome such a fate.

Nietzsche wrote that “only as an aesthetic phenomenon is life justified.” And the Ubermensch will turn his own life into art. “Giving style to one’s character,” wrote Nietzsche, is “a great and rare art.” The Ubermensch would treat his own life as art; his behavior would be daring, noble, and graceful. For example, when Charles I was executed at the end of the English Civil War, he put on two shirts, saying, “I do not want to shiver from the cold and have my enemies believe I shiver from fear.” Such theatrical, dramatic behavior transforms meaningless suffering and death into art.

Nietzsche had in mind someone resembling Castiglione’s courtier. Castiglione was a 16th-century Italian whose book, The Courtier, described the ideal European aristocrat, or nobleman. He was to be both a man of action and intelligence, able to fight a duel and write poetry. Above all, he should possess sprezzatura, something like nonchalance, or gracefulness, especially when confronted by danger.

A good example of an Ubermesch is the 19th-century English explorer Sir Richard Burton, who challenged a fellow student to a duel within days of arriving at Oxford (from which he was expelled), and grew to become a soldier and adventurer. Burton embraced life, translating the Kama Sutra into English, working as a spy in the brothels of India, entering Mecca disguised as a native (he would have been tortured and executed had he been caught), and hunting for the source of the Nile. During his escapades, he became a translator, scholar, poet, and a master of more than 20 languages.

More importantly, Burton was an individualist who dismissed the moral codes and philosophies of his day, and lived life on his own terms. He might almost have had Nietzsche in mind when he wrote:

Do what thy manhood bids thee do,

From none but self expect applause,

He noblest lives and noblest dies

Who makes and keeps his self-made laws.

Of course, this merely scratches the surface of Nietzsche’s ideas. To fully understand him, you must read the works themselves. Unlike more technical philosophers, such as Hegel or Wittgenstein, Nietzsche is quite accessible.