It is often said that we live in a therapy culture, one in which everyone has a label and everyone is a victim. Today, not only do increasing numbers of people believe themselves to be mentally ill, many also believe their family is abnormal. But there is a difference between an odd or eccentric family and one that is truly dysfunctional. 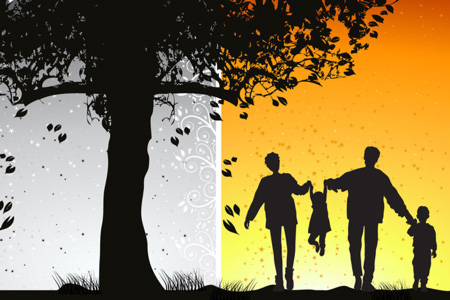 Dysfunctional families come in many shapes and sizes. Indeed, two families can be completely different and yet completely dysfunctional. It must be stressed, however, that no family is perfect. In a sense, all are slightly dysfunctional, just as every individual is slightly damaged and flawed. How then are we to distinguish the truly dysfunctional from the merely human? Perhaps the most common sign is an absence of love and happiness. The members struggle to cope with life. Instead of buoying them up and keeping them strong, the family unit undermines them and makes it harder for them to survive.

Plenty of families are chaotic or eccentric without being dysfunctional. So long as there is genuine love, so long as each member has space yet also feels valued, things usually work out. In other words, just because the mother dyes her hair purple, lets the children swear and fails to tidy the kitchen, that does not make her family dysfunctional! Neither does a sober suit, neat front garden and polite children mean everything is ok. On the contrary, it can often be a facade, one hiding emotional or physical abuse.

A common example is the clingy family. In this sort of family, the individuals seem unable, or unwilling, to pursue lives of their own. Often, there will be a needy, damaged adult at the center. For example, the mother was neglected and unloved as a child. She left home as soon as she could and endured a string of bad relationships, in which men exploited her vulnerability and longing for love. At last she found a good man with whom to have children. Now she has the stability and love she so wanted in childhood – and no one is going to ruin it. So she discourages the children from playing outside or bringing friends home. When someone returns late, or fails to call, she plays the martyr, using emotional blackmail to keep them in line. Inevitably, one of the children snaps and flees as soon as he or she can. Another remains tied to her for life, staying at home and caring for her to the end.

In these sorts of families, the parents seem too interested in their children, who are constantly told they are lucky and reminded that the world out there is dreadful and cruel – that you are better off here. Another common trait in such families is a lack of appropriate boundaries. The parents are overbearing and intrusive. And there is no respect for privacy or for alternative points of view. The parents will often wear matching coats, for example, and may even dress the children in the same way. And when someone asks how the family vacation went, the reply is always “we loved it,” or “we’d never go back,” as though the whole family shared the same experience and point of view.

Then there is the opposite. Some families seem to live in a state of perpetual war. Indeed, in some there is utter hatred. Usually, the marriage itself has collapsed but the parents remain together for financial or social reasons. Thus at the very heart of the family you have resentment and loathing. But it isn’t only the parents. Siblings can literally hate each other. And this isn’t the usual petty squabbles and rivalries. The big test is how they react when someone from outside the family threatens or hurts one of the members. In the worst examples, a girl will join in the bullying of her sister at school, maybe even instigating it. There may also be a lot of jealousy. So, for example, a girl may hate her brother for his charm and popularity, or one sister may hate another for her good looks and attention.

Why? What Creates Such Families?

An obvious question now arises – why? Sometimes, the parents cannot adapt to the society or culture in which they live. An obvious example would be strict Muslim parents who raise their daughter in a country like France or the UK. The child naturally wants to keep up with her friends: to go to parties, wear make-up, and so on. Her parents refuse, and clashes and arguments ensue. Another example can be found in Portnoy’s Complaint, by Philip Roth, in which a Jewish man spends the entire novel describing the torment of life with neurotic Jewish parents in 20th-century America.

Some people have no idea how to be in a family. They don’t know what to do. Their own childhood was so miserable or insecure, and marked by such cruelty and abuse, that they repeat the pattern. It is heartbreaking to see a mother or father who loves their child but has no idea how to show affection. Blindly repeating cycles of cruelty, abuse and addiction is very common. And politicians rightly stress the need to break such cycles.

In any dysfunctional family, the adults have a responsibility. Often, they are the central problem. For example, they have unrealistic expectations, willing the child to be a sports star, a doctor, or a millionaire. In other words, their love is conditional. The child is fussed and adored when he achieves, but ignored and rejected when he fails.

Then there are unrealistic moral demands. Often, these center around sex. So, for example, the mother calls her teenage son disgusting when she finds pornography under his desk, or the father explodes when his 16-year-old daughter is seen kissing a boy. Some parents are utterly intolerant of normal human failings. Normal humans fantasize, masturbate, lie, run away from bullies, experiment with drugs, pick their nose and occasionally steal. In a dysfunctional family no transgression is forgiven or forgotten. In a healthy family, the parents look beyond these minor failings and judge the children on their essential character – on the heart and soul.

Being a parent isn’t easy. You must walk a tightrope between over and under protection, between giving your children too much freedom and not enough. Should you turn a blind eye when you see them smoking a cannabis joint with a friend? Or would it be irresponsible? It is also difficult to know where the boundaries lie. Again, are you being too intrusive or too distant?

Dysfunctional families often include a great deal of shame. The children are made to feel ashamed about everything from sex to muddy shoes, while the parents are constantly accused of having failed them in some way. In healthy families, shame is counter-balanced by love, humor and forgiveness.

Within dysfunctional families you often find certain types of children. For example, there will be the mini-carer. The child of alcoholics often grows up fast – too fast. By the age of 12 he knows how to resuscitate his mother if she passes out, how to roll her on her side to prevent choking, and so on. Others take care of an ill parent, learning the sort of medical jargon most of us don’t encounter until middle-age.

More generally, such children learn to adapt to their parents’ mental or emotional problems. They will take it on themselves to cheer up a depressed or lonely mother, for example. Others become little peacemakers, forever trying to placate an irate or abusive father. In the most extreme circumstances, a child will get between a drunken father and ailing mother, literally taking the beating on her behalf. In other cases, a child may wish to spare her gentle and loving father from his wife’s spite and infidelity.

Then there is the golden child: the child who can do no wrong, whose parents expect great things of him or her. Again, there is the problem of conditional love (so common in dysfunctional families). The child is fussed and praised, told constantly that she is amazing, exceptional and destined for great things. Soon, however, she begins to realise that this is why she is loved. Even worse, failure may mean a withdrawal of that love and praise. So the child has two choices: either become a neurotic mess as she tries to get into Oxford University (as her family expect) or rebel and risk losing their love. The first option means neurosis, the second anger. Either way the child is destined for the therapist’s couch.

In other families, one child becomes labelled as “the problem child” or “the devil child.” Inevitably, they live up to this label. Their parents have written them off and so they conclude that it doesn’t really matter what they do. Often, these labels begin because an older sibling has been over-valued and over-praised. For example, the parents attend a school meeting where they are told that their eldest son has scored very high on his I.Q test. They are overjoyed and can’t stop talking about it. The younger brother listens and grows bitter. To get attention he then becomes disobedient at school; after all, he can’t compete with his brother in any other way. Rather than trying to understand why, the parents ask “can’t you be more like your brother?,” which is like throwing gasoline onto a fire.

The consequences for those trapped in such families can be appalling. Stress and depression are only the beginning. Children raised in homes filled with violence and sexual abuse often develop post-traumatic stress. Those exposed to extreme anger and tension, for example, may become lifelong people-pleasers. Unfortunately, this often backfires. Rather than preventing confrontations an eagerness to please often provokes people.

Those caught in these kinds of families also tend to become either intensely selfish or selfless. A mother, for example, may play the martyr and like seeing herself as too good or too caring, someone who sacrifices everything for those she loves. The children of such families tend to veer to an extreme. When they have their own children some resent them. They spent years looking after an alcoholic father, or mentally ill mother, and now they have to start sacrificing all over again; consequently, they resent their child and do the bare minimum to keep them alive. Others are so determined to give their child the love and opportunities they never had that they smother them instead. They do not understand that love means giving people space and, in the case of children, letting them go.

The negative effects can hardly be overstated. Indeed, many social problems begin with dysfunctional families. As for the individual, therapists spend much of their career helping them recover!