Swearing is an unsavory habit that many of us get into and then have a hard time getting out of. The problem with swearing is that it’s something that becomes completely ingrained into our psyche almost like our reactions and in some cases victims of brain damage who have completely lost all other language find themselves still able to swear when shocked or aggravated. Here we will look at why you should avoid swearing, and some tricks you can use to go about training yourself to ease off.

The Problem With Swearing

The problem is a profound one that has many impacts on our life – some that we are no doubt aware of and others that we might not have considered or noticed. First and foremost swearing is an issue in particular company. For instance if you are at a children’s party and you start swearing profusely, or if you are in a business meeting or interview and you let loose with the profanities then in either case this is going to be deemed highly inappropriate and people are likely to judge you harshly as a result. 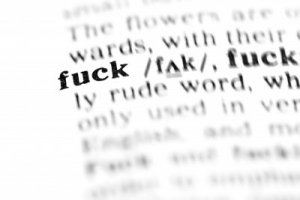 Swear words are of course just words, but their connotations have come to be more than that, and they are generally thought of as aggressive or unpleasant. For some people swearing can be highly offensive and hurtful and while you might not think twice when someone swears, they may well be genuinely upset to hear you do so – so try to be considerate and avoid upsetting people unnecessarily by toning down your swearing. The problem though of course is that if you have started to swear as a habit/impulse, then this will be very difficult to tone down under the right circumstances and you will find that you end up swearing and cursing involuntarily at times when you know you shouldn’t.

And the other problem with swearing is that it means people don’t take you seriously. If you are in a business meeting, or dealing with someone on the phone, then the minute you start swearing you will have lost the other person’s respect and they will view you as less professional. Similarly if you are talking to someone you don’t know then they will estimate you as having a lower IQ if you swear more – it’s colloquial language and many people swear as a result of not having a full vocabulary so you don’t want people to think that you fall into that category.

Polishing Up Your Language

So if this is you, then you need to start fixing your speech and stop swearing. The problem is how? Here we will look at a couple of methods you can use to stop swearing.

When you drop a frying pan on your foot, or when you get startled, you will have it as part of a reflex to curse loudly. This is simply a reaction that has been hammered home through repeated use and those pathways are simply there and heavily ingrained – there’s no logical thought or contemplation going on there.

What you need to do then is to simply change what it is that you’re shouting when that happens. This way you can still have your natural reaction of cursing, but you can make it a lot more tolerable for people who don’t like the sound of swearing.

You need to choose this word well though. Obviously you aren’t going to suddenly be able to change to starting to say ‘golly gosh!’ every time you drop something. That therefore means that you need something that is going to have a bit of bite to it and that is going to feel like swearing. ‘Gordon Bennett!’ is one that has a good angry ring to it, or ‘for Pete’s sake!’. Practice and see what works for you.

At the same time it’s going to help if you pick a curse word that is similar to your current choice of swear words. If you find yourself constantly saying ‘shit’ then change it to ‘sugar’, whereas if you constantly say ‘fuck’ then change it to ‘fudge’ or something close. This way you can use the same existing ‘channels’ but quickly alter the word as you find yourself saying it and it will come more naturally.

You also need to practice this new swear word a lot in order to give it that ease of access for your brain that ‘real’ swearing currently has. You want it to be so ingrained into your brain that it’s hard for you not to shout ‘fudge’ or ‘sugar’ when something happens. To get to this point try using the words every time that you are mildly annoyed where you are consciously choosing to use expletives. So if every time you are a bit annoyed or lost for instance you mumble ‘ah fudge’ then the next time you are suddenly shocked or enraged it will be practiced and available. Likewise practice using it in conversation instead of casually swearing.

Sometimes a swear word just slips out even with our best intentions and if you have a young child looking up at you with eyes like saucers hanging on your every word then this can sometimes mean trouble. Covering up your swear words can help to make them more bearable and there are several ways you can do this.

You can for instance practice changing the word as you say by adding something on the end. So if you find that you keep saying ‘fuck’, then simply add something onto the end like ‘rying out loud!’. Now what you are saying is ‘fuckrying out loud’ – i.e. ‘for crying out loud’. This is a great little way to cover up the mishap after it has happened and to fool younger children.

Another option is to simply clap loudly at the same time as you swear and this can cover it up audibly.

Remember this is something that has been ingrained in your brain through practice – not something that you are consciously choosing to do. Thus you need to use the same kind of brain training to un-ingraine it. One way to do this is simply with minor punishments which you can use every time you do swear.

One easy way to do this is to use the elastic band technique. That means simply having an elastic band around your wrist and now every time you catch yourself swearing you pull it back and ping it against your own arm. This will sting and over time you will come to associate swearing with the feeling of that sting which will then mean that your unconscious brain steers away from those words rather than helplessly steering toward them.

Another popular form of punishment that many people adopt for ceasing swearing is to use a ‘swear jar’. Here you have a small jar or pot that you all agree to put a little money into every time you swear. This can be a fair amount if you really want to train yourself to stop and the great thing is that after a while you will then have some money to raid that you can use to fund a holiday for instance or something else.

Of course part of the problem with pinging yourself or enforcing yourself to use a jar of money is that you will find that sometimes you simply forget to use it and this means that you will end up missing times when you should have put money in. Remember swearing is often automatic – in other words you often don’t even know you are doing it. Particularly with the swear jar then, but in all cases, it is a very good idea to have other people know about your plight and they can then warn you or nudge you when you do let slip a swear word and make you carry out the punishment.

If you are swearing a lot then that means that you are likely wound tight – after all we mostly use swear words to curse or to exclaim. Being so highly strung for so long simply isn’t good for you though and so it is important to find ways to calm yourself down. You can do this through many different strategies – whether you opt to simply control your breathing and try to maintain a steady heart rate, to practice occasional meditation which has been shown to help improve overall calmness, or to try to address whatever it is that is causing your stress in the first place (probably the better option).

If you find that you are swearing not as a form of expletive or curse, but rather than you are colloquially swearing as part of your general vocabulary in conversation etc, then this will mean that you are likely doing so as part of your vocabulary. This might mean that you could benefit from learning to improve your vocabulary so that you had less need for swearing. You can do this either by opting to learn one new word a day (it doesn’t seem like much but after a year that’s 356 new words) or by simply reading more which means you tend to take the new words in by osmosis.