As fears go, a fear of elevators is a common one and one that we encounter a lot. And while it is relatively easy to avoid elevators, it is still a rather inconvenient phobia and also one that can be at times embarrassing. Having to take the stairs every day to the top floor of your office building is great for your cardiovascular fitness, but when you are asked to get an elevator with some business partners and to discuss an idea on the way and you have to explain that you can’t… or when you need to take a pile of huge crates to the top floor of your high rise building… Suddenly it’s not quite so easy to avoid and it can become quite a serious inconvenience.

So how do you go about tackling your fear of elevators so that you can ride with everyone else? 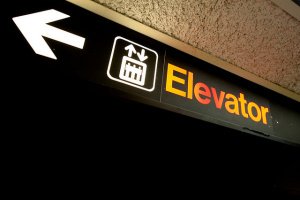 First of all, decide what your fear is actually of. It could be a fear of the elevators themselves you see, or it could be claustrophobia. Decide if you would be happy to be in an elevator that wasn’t moving and this way you can decide specifically what it is you need to be trying to eliminate.

Following this your best bet is to then get professional therapy – or failing this to try some of the techniques used by therapists yourself. Here we will look at three of the major schools of therapy and what you can learn from each.

In behavioural psychology we are viewed as almost ‘input/output’ machines. Here we establish connections from experience in the real world – for instance we learn to associate chocolate with a pleasant taste – and this then affects our expectations and actions in regard to that stimuli in future. The most famous example of behavioural psychology is known as ‘Pavlov’s Dogs’ in which the researcher Pavlov managed to use this kind of ‘conditioning’ in order to get dogs to salivate at the sound of a bell by teaching them to associate that bell with food. Eventually, even without the presence of the food, Pavlov could trigger a physical reaction in the dog’s saliva glands.

In the 1950s behavioural psychology was big and the psychodynamic ideas that preceded it were left behind. At this point it was believed that almost all human behaviour could be reduced to this kind of conditioning. Subsequently we have learned that this is not the case, however elements of behavioural psychology are still useful – and most specifically when it comes to phobias which often are the result of a bad association.

You might associate lifts with falling or with being trapped, and this might be a result of an experience in your childhood, of vicarious learning (perhaps you saw a film that struck a chord or heard a third person account) or even something you have simply imagined repeatedly in your own mind. To rid yourself of this then you need to build new associations to replace those negative ones through desensitization and to achieve this you need to gradually expose yourself more and more to elevators while at the same time experiencing some kind of positive reward. So stand in an elevator and eat chocolate, or get reassurance from a friend, then next time try standing in a lift and closing the doors, and the time after travelling to the first floor etc.

This form of re-association is perhaps the most effective and widely used tread treatment for all forms of phobia and it’s highly recommended that you give it a try.

Psychodynamic therapy was the first form of therapy based on the theories of Freud and his contemporaries. The idea here is that the mind is split into conscious and unconscious regions, and that our unconscious mind often interferes with the conscious. In the case of phobias, Freud believed that we repress a source of fear in order to protect our psyche, but that this then arises in other more obscure ways.

In short then, a fear of elevators is not in fact a fear of elevators at all, but rather a fear of something else that is represented by elevators. This fear will most likely stem from an experience in your early childhood, and you won’t be able to overcome this fear unless you come to terms with what you’re really afraid of and face it. Psychodynamic therapy will aim to accomplish this by using regression techniques and dream analysis to uncover clues from the unconscious mind.

Many people reject Freud’s ideas, and rarely are they used today to treat phobias in otherwise healthy patients. However everyone is different and psychodynamic theory certainly is not without merit – so it might be worth at least reflecting on the nature of your phobia to decide if it goes any deeper than just an association.

Cognitive behavioural therapy is the most modern form of therapy and is currently very popular. This is because it has a history of getting good results, and because it is cheap, quick and easy to employ.

This form of therapy came about by building on the exiting ideas of behavioural psychology – only now an extra ‘cognitive’ element was added that could be likened to the way a computer works. The idea is that our brain runs a kind of ‘software’ in the form of our thought patterns and mental habits, and that this can have either negative or positive effects on our psychology.

In the case of a phobia of course these are negative effects, and it may be that you are having ruminations when you are in the elevator along the lines of ‘it’s definitely going to fall and crash’, or ‘I feel so hemmed in’. You may be so used to having these negative thoughts that you are hardly aware that you are doing it, and that they are in actual fact fuelling your phobia.

Your goal then is to replace these negative thoughts with more positive ones in what is known as ‘cognitive restructuring’. You can do this by spending some time to listen to the contents of your thoughts (mindfulness) and to then practice using some more positive sentiments and repeating those. These are ‘positive affirmations’ and they are most effective when they are rationalizations – because of course we all know that in reality the elevator is very unlikely to crash and that our concerns are unfounded. Try then repeating phrases in your mind such as ‘there’s a less than .01% chance of there being a problem’, and ‘there are countless safety measures in place’, and ‘if there were to be an accident, I would know nothing about it’.

This form of treatment for phobias has also proven to be very effective, and can be used in conjunction with re-association (above) in order to achieve a lot of success.

And just to put your mind at rest, it is also very true that you are unlikely to experience any kind of danger on an elevator. First of all elevators will always use backup generators – these come online the instant there is some kind of power cut and rely on other energy sources such as petrol to ensure that the elevator is unaffected. Likewise the elevators have jamming mechanisms so that should the lift begin to fall it would immediately be caught. On top of this they are subjected to very regular safety checks by law in order to ensure that they are always in full working order. They are also tested for their maximum load, and the maximum noted inside the elevator will be a very conservative estimate in order to avoid any chance of your accidentally exceeding it. In the case that the elevator should become jammed there will be a phone to call for help, an escape hatch and a ladder to help you climb out.

In short then there is an almost zero chance of there being a problem and even if there were there would be an even small chance that that problem would result in injury of any kind.