We’ve seen research in recent years that indicates that mindfulness meditation can help us to keep our emotions under control (even outside of meditation), that it actually increases the amount of gray matter in the brain and facilitates neuroplasticity (which helps to keep us free of degenerative diseases such as Alzheimer’s), that it reduces high blood pressure, and that it can relieve pain and the effects of PTSD. Sometimes one gets the feeling that the next thing scientists are going to tell us about meditation is that it it’s a cure for the common cold.

Meditation may not cure colds and the flu, but it does seem to prevent them 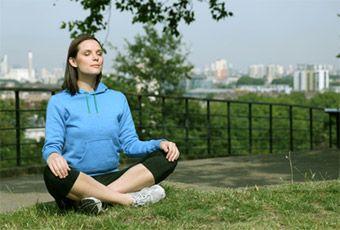 In a study conducted by professor Bruce Barrett of the University of Wisconsin and published in The Annals of Family Medicine, it seems that meditation actually does have an effect on the common cold. And on the flu.

In the study, 149 people with an average age of 59 were divided into three groups. 51 received an eight-week course in mindfulness meditation techniques, 47 were asked to perform moderate exercise such as jogging or bicycling, and the remaining 51 were not asked to change their lifestyles at all. After the completion of this same eight-week preparation period, the researchers tracked their progress through the just-starting “cold and flu season,” checking on any reported symptoms, collecting nasal samples, and recording things like the number of lost work days due to cold or flu symptoms.

Studies on people taking vitamins or other health supplements to keep away colds and the flu have proved contradictory over the years, and even those indicating some decrease of cold and flu symptoms did not match this study’s results. As Dr. Barrett puts it, “Nothing has previously been shown to prevent acute respiratory infections.”

The meditators in his study even beat being vaccinated against the flu, according to Dr. Barrett: “Flu shots are partially effective, but only work for three strains of flu each year. The apparent 40 to 50 per cent benefit of mindfulness training is a very important finding, as is the apparent 30 to 40 per cent benefit of exercise training. If this pans out in future research, the impact could be substantive indeed.”

So if you’re wondering what you can do this coming flu season to avoid the bugs, and stocking up on vitamins or other things that have worked for you in the past, you might want to add meditation and a little exercise to the list. They might help.