The name comes from the association between the hatmaking industry and mercury – historically felting work would require prolonged exposure to mercury vapors. As mercury is neurotoxic, this could then result in a number of unfortunate side effects, some of which might be considered a little ‘eccentric’. 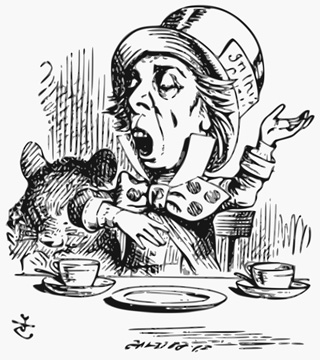 This may be what initially inspired the phrase ‘mad as a hatter’ and possibly the Mad Hatter character from Alice in Wonderland (though another theory is that Lewis Carroll was inspired by the eccentric furniture dealer Theophilus Carter).

Chronic occupational exposure to mercury can lead to a number of symptoms including mental confusion, emotional disturbance, muscular weakness, kidney damage, tremors, sweating, loss of hearing, red fingers and toes, red cheeks, insomnia and shyness. The technical term for this condition is erethism. Usually, the changes in personality (such as social phobia) will be observed first before the other more obvious symptoms and it is easy to misdiagnose as a result.

Today we are more aware of the negative effects of mercury and so occupational exposure is less common. Mercury poisoning to this severity is generally far less common too, with the main cause today being consumption of fish. As fish can contain large amounts of mercury from the seawater, this may be one cause – though you would likely need to eat in excess of a tin every day in order to suffer from mercury poisoning. As long as you’re not eating tons of tuna every day, you probably have nothing to worry about.

Other potential threats include damage to dental restorations, or contaminated air. Mercury poisoning is generally rare but should still be considered.

Medications such as Traid and Ritalin can be used to treat erethism. Of course those who notice symptoms are also advised to avoid further exposure to mercury.