Crackling when you exhale can be an alarming and unsettling experience – especially as it can be described as a ‘death rattle’ – but could be a sign of various conditions, not all of which are serious. Taking note of crackling when exhaling is recommended, as is getting medical attention to identify the possible causes. Here we will have a look at some of the various things that may be causing the problem to help you self diagnose the problem – but you should still get it checked by a medical professional.

There are several possible causes of crackling sounds when breathing. For one it might be a symptom of a blockage, or alternatively pneumonia. In the latter case the crackling sound is made by liquid in the lungs.

The fact that the crackling is during exhaling suggests something about the possible cause – were the crackling during inhaling then this might suggest that the problem was caused by asthma, bronchitis or emphysema. With exhaling it is more likely to be pneumonia, other infections or blockage. Crackling on exhaling may also be a result of pulmonary edema. 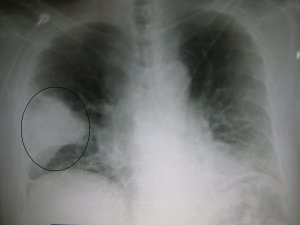 Pneumonia is an infection that can in some cases be fatal if untreated, which is why it is so important to seek medical attention as soon as you note the sound. If you suspect you may have pneumonia then look out for the other symptoms which include fever, coughing, shortness of breath, chest pain (when breathing in), headache, fatigue, perspiration, and muscle pain. Pneumonia is usually treated through antibiotics along with rest.

Where the problem is caused by a blockage this occurs due to a blocked airway or pressure on the outside of the lung. In some cases this can cause ‘atelectasis’ where an entire lung collapses and becomes airless. This blockage could be caused by a foreign body in the air passage (such as something accidentally ingested), diseases that narrow the airways (such as asthma), tumors, mucus plugs and more. Pressure outside the lung meanwhile can be a result of pleural effusion, pneumonia, injury, tumor or scarring of the lung. Treatments for this will include exercise courses, supplemental oxygen, mechanical ventilation, breathing exercises and other measures depending on the severity of the problem.

Pulmonary edema is characterized by the excessive build up of fluid in the air sacks (alveoli) of the lungs. This can be a result of heart failure, of certain medications, of severe infection or of trauma. In some cases high altitudes can also cause pulmonary edema.

Other symptoms include anxiety, difficulty in breathing, sweating, the feeling of ‘drowning’, gurgling sounds, pale skin, restlessness, wheezing, coughing up blood, confusion and lack of alertness and nasal flaring. This is treated through the use of oxygen and diuretics while the underlying condition is stabilized.

Of course other causes may other things might cause this sound if they are obstructing the air if you breathe through your nose for instance then there is a chance that this is a result of a blockage in the nose (perhaps caused by a cold, or by a deviated septum). Try to identify where the crackling sound is coming from to ascertain whether it may be a problem with your lungs.

In other cases if you feel pain with your crackling then it may be a sign of other conditions such as bronchitis or even lung cancer – and the latter is particularly likely if you have been a smoker or worked with asbestos. Again though these conditions are more likely to be associated with inhalations rather than exhalations, and are also more likely to be associated with pain in the lungs.