Many of us have high aspirations when it comes to our fitness and will regularly commit ourselves to new training plans and diets. Often these plans involve working out at the gym multiple times a week, reducing our calorie count and consuming more protein.

The only problem? Life.

Life has a very unfortunate habit of getting in the way of our plans and this can make it very hard for us to create the changes we want to see. The result is that we end up skipping trips to the gym because we’re too busy, we’re too tired or we’re too ill. We eat the wrong thing because we don’t have time to cook and after a week or two we completely forget about those plans.

Even if you’re someone who has always worked out and who loves staying in shape, you might find that there are phases where you’re unable to get to the gym as much as you would like and this can be a source of distress.

But I have found a solution! And that is to train every morning for just ten minutes.

Why Training for 10 Minutes in the Morning Makes Sense

Personally, I fall into the latter camp. I have no difficulty motivating myself to train because it’s my favorite hobby. Problem is, that sometimes life doesn’t leave me much time to make it to the gym and work out. And while I can train from home, I don’t have much space so that still involves rearranging a lot of my things, clearing space and generally faffing about. Plus, I can’t train as well at home as I don’t have access to things like a bench press.

By working out each morning though for just 10 minutes, I ensure that I have done something every day. Even if I don’t make it to the gym, I can rest assured that I’ve managed to get some exercise which is certainly better than nothing.

On the days when I make it to the gym as well, it’s just something extra.

And by doing it in the morning for only this short amount of time, I’m ensuring there’s always time. In fact, one of the most important aspects of this plan is that I train before the shower. This has always been a problem for me working out – the amount of time it takes to shower after training means that my quick workout has gone from 30 minutes to 45. Plus, I have to find new clothes etc.

Not only is 10 minutes not really enough to make me too sweaty but by training in the morning before the shower, I’m training at a time when I would have been showering anyway. 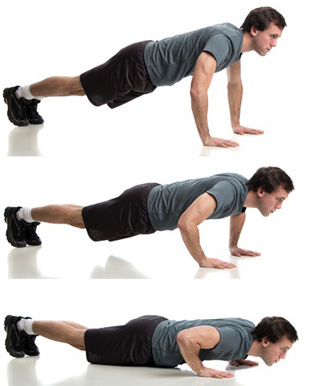 The routine I use is something very simple but it hits nearly everything and is more than good enough for a basic ‘all over routine’.

Either way, I’m doing a push exercise, a pull exercise and swings. I’m also doing enough of these and doing them fast enough that it becomes quite a good cardio workout. There’s very little equipment needed (just the pull up bar and potentially kettlebell) and it all takes place in one spot.

Typically, the quick routine will burn around 100-200 calories – which is enough to get away with eating a chocolate bar guilt-free.

If you’re struggling to stick to an exercise regime then, give this one a go! It’s quick, it’s simple and it’s easy to incorporate into your regime.

Here are some tips to help you have luck with it: