Running is one of those things that most of us tend to do without giving much thought. We’ve been doing it since we were in the playground, so why would we need to question it? Well, if you find that you tend to avoid running because it makes you tired and sweaty, and/or because it puts strain on your knees, shins or back… then you’re actually not doing it right. That’s why.

Actually humans are designed specifically to be great at running. In the wild we were not as fast as the animals we would be hunting and as such we had to rely instead on an ability to track them over long distances – which we accomplished through a combination of long-distance running and our ability to track and use tools to our advantage. Tribes that do this today, such as the Tarahumara tribe, are still capable of running hundreds of miles a day. Which is nuts.

Where it All Goes Wrong 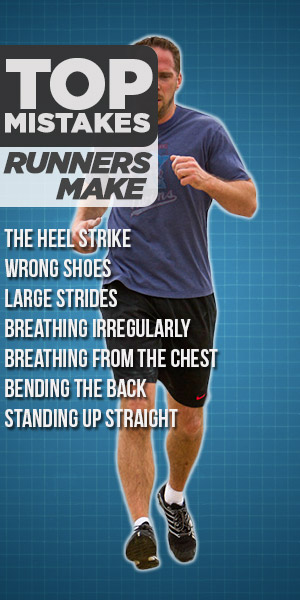 So what’s the difference between them and you? At what point did you lose your ability to run long distances and instead begin struggling just to make it up the stairs?

The problem is our modern lifestyle. The biggest issue is that we are now encouraged to sit in the same spot for hours on end while we work on the computer or enjoy watching films. Not only does this mean we aren’t getting any exercise, but it also causes the muscles in our buttocks (our gluteus maximus) and our lower spine (our erector spinae) to become stretched and weakened. Meanwhile our hip flexors (such as our quads) get shortened and tightened.

Then there’s the problem with modern shoes. These have big heels which encourages us to run using an incorrect gait compared to the way our bodies naturally want to run (more on this later). In short, a lack of practice and years of bad training lead to us becoming awkward when we run and ultimately making life difficult for ourselves/potentially causing injury.

Here then we will look at some of the top mistakes that runners make today. Hopefully you’ll recognise a few of these issues, and as a result you’ll be able to correct your running technique and thus start enjoying running a lot more again.

Which part of your foot is supposed to hit the ground first when you run? Many people believe the answer should be the heel, and they will act accordingly by running in such a way that their heel hits the floor before the rest of their foot. The heel hits the ground, their foot rolls onto the front, and then they lift off to take their next stride.

This is a result of our modern shoes which have large heels on the bottom, but it is not actually correct. In fact if you run so that your heel hits the floor first, this will mean your foot is in front of your body and your leg is quite straight when it gets the force. This in turn means that it will be your shin and your knee that takes the brunt of the impact, leading to shin splints and a lot of potential knee troubles.

In fact, your gait should be such that the front/middle of your feet hit the ground first thus allowing your leg to act like a spring – bending at the ankle, knee and hips in order to absorb impact and soften the blow.

This follows on from the point above. If you are going to encourage your foot to land more towards the front rather than on the heel, then you need to use more ‘minimal’ shoes that lack that big heel. This is how we have evolved to run, and it is how tribes such as the Tarahumara tribe run.

The most famous example of a ‘minimalist’ shoe is the Five Finger shoe from Vibram which features flexible toes like a glove. These shoes are good, but many people won’t find them comfortable or will think they’re a little too extreme looking. There are several other ‘minimal shoes’ available, and you may find that these are better suited to your needs.

Another reason that we tend to land on our heel when running is that we take large strides. This is how many of us have been taught to run faster, but in fact this again means that our feet aren’t underneath us as we run and negatively impacts on the direction of energy transferred through our body and distributed across the joints.

Instead then, the best way to increase speed is not to increase stride length, but rather stride regularity – the tempo or cadence of your running. This also actually makes for a better cardio workout if you’re running to lose weight/improve fitness.

Correct breathing is very important if you want to get the most from your runs, so it’s unfortunate that many people’s breathing is irregular and fitful when they run.

Ideally you want your breathing to be timed to coincide with your movement. According to research (link couldn’t be found, but the research was largely led by a researcher named ‘Coates’), professional runners will use a 2-2 breathing pattern meaning that they breathe in for two steps and out for two steps. Subsequent papers have argued that this could potentially cause damage as you’re always breathing out and in on the same side – but there is little evidence to support this theory. If you’re concerned you can try using a 3-2 pattern instead, but either way the main take home message is to keep your breathing regular if possible.

Breathing From the Chest

Another issue with breathing that many of us have is that we breathe from the chest rather than from the stomach – which is an issue we have generally as opposed to just when we run.

The problem with this is that it means you only use the tops of your lungs which are less efficient. Instead, you should breathe by letting your stomach relax (by relaxing the transverse abdominis), thus letting the diaphragm lower into the abdominal cavity. Then you can expand the chest as well.

To do this you will need to stand up straight, which brings us to our next point…

Many runners will fail to stand up straight enough, meaning that their upper back is tilted forward and not kept straight directly above the waist and hips. This places strain on the lower back and is again a problem that’s indicative of large issues.

Remember to stand up straighter and keep a good posture and you won’t have a sore back the next day.

Just because you are keeping a straight line through your back though, that doesn’t mean you should be standing up completely straight. According to the ‘pose’ technique of running, it’s actually preferable to lean the entire body slightly forward so that you are actually falling forward and using your feet to catch yourself. In turn this means that gravity is now doing some of the work, thus making your running technique more energy efficient so that you can travel farther, faster.