Is it a Butterfly Rash? 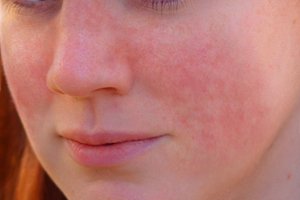 It’s easy to mistake various facial rashes for butterfly rashes as often a range of other rashes will take on the same distinctive features. The main and most obvious feature of the butterfly rash in the majority of cases is that it will cover both cheeks (usually the upper portions primarily) and will be connected in the middle across the bridge of the nose. Usually the tip of the nose and the nostrils are not affected and this then gives the butterfly rash the appearance of a butterfly or moth – where the wings are the rashes on the cheeks and the thin body is situated on the bridge of the nose.

However a butterfly rash will vary somewhat in shape. In some cases it won’t take this shape at all, and in others it will accompany other patches of rash on the forehead, eyelids, jaw and more (malar comes from the Latin ‘Mala’ which means ‘jaw and cheek bones’). The color and texture of the rashes might vary too. Likewise not all rashes that cover the cheeks and are joined across the bridge of the nose are going to be malar rashes, and so it’s important to look out for other features too.

Other features of the malar rash are:

The malar rash is also distinctive in that it is transient. This means that it flares up and then goes into periods of remission. Usually these flare ups will coincide with lupus flare ups and this is the easiest way to tell if you know you suffer from the condition. Here we will look at some facts about lupus to help you determine whether this is the cause and to help you understand what the consequences of this may be.

Lupus is an autoimmune condition meaning that it is caused by the body’s own immune system. In lupus the immune system begins to attack the cells of the body and this results in a range of other systems. Being able to tell the symptoms is a good way to identify whether lupus might in fact be the cause of a rash.

Unfortunately lupus is a very difficult condition to diagnose and this is because it belongs to the group of diseases unofficially known as ‘the great imitators’. These are the diseases that it has been noted mimic other conditions in their symptoms and vary greatly making it very easy for misdiagnosis. This means that many people go untreated with lupus for years.

However other signs of lupus to look out for include:

Unfortunately there is no cure for lupus, though the symptoms can be managed with corticosteroids and other immunosuppressants. Thanks to modern treatments the survival rate for lupus is now high at around 95% after five years, 90% after ten years and 75% after twenty years. At the same time things like the butterfly rash and arthritis can be treated symptomatically to make living with lupus more bearable.

If you have a butterfly rash and lupus then this can be an unwanted additional stress factor and embarrassment on top of the other distressing symptoms of lupus. While there is no cure for lupus nor for the rash, there are nevertheless ways to manage the condition and to make it less painful and visible.

The first thing that’s important is to make sure to avoid too much direct sunlight. One of the symptoms of lupus is photosensitivity and this extends to the rash – the longer you spend in direct sunlight the more you will find the rash emerges and the angrier it looks. Make sure then to use a strong sun cream that can protect you from UV rays whenever you go out, and find other ways to cover your skin too – such as using scarves, sunglasses and other means to protect that area.

Another thing that can worsen butterfly rash like many transient conditions is stress or lack of sleep which can trigger a flare up. To avoid these things being a problem you should make sure to get plenty of rest if you suffer from lupus and to listen to what your body is telling you.

There are several creams and treatments that some people find effective in easing the appearance and the symptoms of a malar rash. Corticosteroid creams are effective for some people but can also worsen the condition, and they can sometimes be quite harsh to use directly on the face. Likewise with many other creams for malar rashes results will vary from case to case. Consult your doctor and ask for their advice and then carefully monitor results.

If you are concerned about the appearance of your malar rash then there are some options you can use to help improve matters. One is to make sure to use foundation and concealer in order to cover up the rash where it flares up. Another measure is to use scarves and large sunglasses to cover the areas where it shows (though this may look unusual in summer). Maintaining generally good skin care is highly advisable for those with butterfly rashes as this can help the appearance to be generally less angry and can improve your overall appearance.