With a million and one diets out there to try it’s getting increasingly difficult to separate the wheat from the chaff (ironic, seeing as many of these diets recommend that you avoid wheat…).

The Omni Diet is just one more diet to add to that list of options and to further complicate matters. But on the face of it – judging from the name alone – it sounds rather promising. ‘Omni’ suggests everything, which suggests that this is a diet that you perhaps aren’t going to be avoiding anything entirely.

An Introduction to the Diet 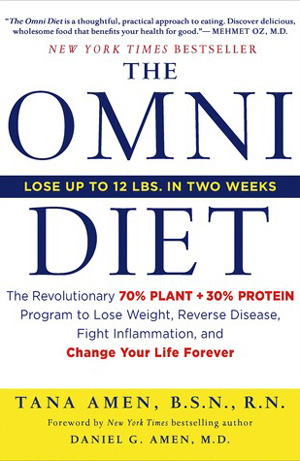 The Omni Diet comes from author Tana Amen – who has also been responsible for a fair amount of other text on living a healthy life.

The idea behind the diet is very simple. It is to focus mainly on plant foods and to combine this with some lean protein. The objective is to get as much nutrition as possible from the plants so that you’re packed with vitamins and minerals and to then feel full and fortified thanks to the lean protein. At the same time, this should aim to stabilize the blood sugar seeing as you won’t be eating large amounts of carbs.

Sounds good on paper and it’s pretty much the same story as most of the effective diets. But it does get a little more specific than that and this is where we start to run into trouble.

The first signs of a problem come when we look at the list of allowed and disallowed foods.

The allowed foods are:

The disallowed foods are:

Interestingly, the diet also includes a number of ‘phases’ with the end goal being to help you lose 12 pounds in 2 weeks. During phase 1, alcohol is prohibited.

Exercise is also ‘required’ for the diet to work.

Let’s start by looking at the good. This diet does have some good things going for it.

For starters, it is indeed very important to aim to eat a nutritious diet. When you eat a diet that is truly nutritious and packed with vitamins, minerals and superfoods; it is like packing your diet full of athletic supplements. Seriously, the amount of good you can do for your immune system, your energy levels, your brain power and more simply by eating more good things is vastly underrated. You really are what you eat and if you eat high quality food, then you’ll improve your health considerably.

At the same time, the diet is good for recommending protein and not entirely banning carbs. The rules telling us to avoid gluten and white potatoes means we’ll automatically be eating fewer carbohydrates. But because this isn’t a hard and fast rule, you’re not going to make the mistake that a lot of people make which is to completely starve your energy levels, cause your blood sugar to plummet and see negative effects in your brain power and your testosterone production as a result.

The diet is relatively simply and doesn’t make any outrageous claims, so it’s not impossible to imagine it working.

Unfortunately, there is quite a lot of bad here too.

For starters, the idea of losing 2 pounds in 2 weeks is ambitious and misguided. Any diet with a set ‘end point’ is really rather pointless as you’re only going to see your weight yoyo back to the starting point when you’ve finished. Anyone can lose weight fast, the challenge is keeping it off and doing it in a safe and consistent manner.

And what’s more is that most people probably won’t lose that much weight in that time. In fact, this diet on the face of it doesn’t look as though it is designed for losing weight. There is no calorie restriction and nothing about eating as much cake as you want (it’s implied but not an explicit rule). The focus on nutrients is really good but is much more likely to improve your health than help you to lose fat. It’s like someone came up with a relatively good diet and then decided they wanted to market it to a more ADHD audience!

That said, there are problems with the actual advice contained in this diet too. The first is avoiding dairy. There’s nothing wrong with dairy! While it’s true that a lot of people outside the US and Europe are allergic to dairy, it’s also true that most English speakers are not allergic to it! What’s more is that dairy is a very common part of the diet that’s hard to avoid, it offers lots of nutritional value and it actually improves the absorption of many key nutrients.

The same goes for avoiding gluten. The advice to avoid bread if you want to cut calories is sound but gluten is only a problem for those with a sensitivity to it. This advice isn’t going to prevent you losing weight and it’s not unhealthy – it just makes sticking to the diet harder unnecessarily.

And this is quite a hard diet to stick to when you consider that you can’t eat potatoes, chips, cheese, milk, chocolate…

In short, the diet isn’t terrible but there are much better ways to lose fat quickly and to fortify your health effectively!