Platelets are small irregular cell fragments (cells without a nucleus which do not have any DNA) which circulate the blood and give it some of its viscosity and contribute to blood clots. Thus low numbers of platelets may lead to excessive bleeding which can be dangerous under certain circumstances. 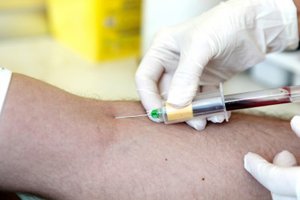 In many cases low platelet levels will be picked up on routine blood counts rather than through clinical problems. However signs and symptoms can include the appearance of bruising (purpura in the forearms) as well as nosebleeds and bleeding gums. Patients may also experience fatigue, weakness and malaise. Petechiae may also appear on the skin which are small purple/yellow-green bruises that vary in size and shape but are painless. Sufferers will also find that they experience slower healing of wounds and are more easily bruised than they previously were or than others. Patients with low platelet counts may be at risk when undergoing operations and more likely to suffer profuse bleeding on the operating table.

In cases where a patient is found to be suffering from thrombocytopenia, it is highly important that they have their medical history examined and go through a series of further tests. This is important in order to ensure the problem is not being caused by another more serious condition. It is also important to ensure that other blood cells such as red and white blood cells, have not been similarly depleted.

There are many different causes of thrombocytopenia. These include decreased production of platelets which can be a result of many factors – a vitamin B12 deficiency for instance, or a folic acid deficiency. As platelets are created in the bone marrow, leukemia can also cause the problem as can dengue fever which is an infection of the bone marrow. Other viral and bacterial infection is also a common cause. Many other causes are genetically inherited such as Alport syndrome, grey platelet syndrome, Wiskott-Aldrich syndrome and many others.

In some cases however it is not the creation of platelets that is affected, but rather the destruction of them which is increased (platelets are normally destroyed by the body but only to a certain degree). Similarly, many conditions can cause an increase in the destruction of platelets and these include ‘antiphospholipid syndrome’, ‘hemolytic-uremic syndrome’, ‘post-transfusion purpura and more’. Many immune system disorders also damage platelets.

Platelets can also be depleted as a side effect of numerous medications. These include valproic acid, methotrexate, many more chemotherapy drugs, interferon H2 blockers and more. Even snake bites, particularly though of pet vipers, can cause the condition.

Due to the various causes of thrombocytopenia there are also various treatments. Usually the main purpose of treatment is to treat the underlying cause which might mean a change of medication, or treatment of infection/leukemia. At the same time the level of platelets may be increased through the use of corticosteroids and other supplements such as lithium carbonate. Platelet transfusions can also be used to immediately treat the symptoms.