Baking soda, or its chemical name sodium bicarbonate, is an odorless crystalline white solid that has many industrial, food, and health uses. Sodium bicarbonate is non-flammable and dissolves in water. It is commonly seen in a number of commercial products such as detergents, soaps, toothpastes, deodorants, and others. Baking soda has an inexpensive cost, and with its numerous cleaning, hygiene, and medical applications, it is recommended to always have it available. 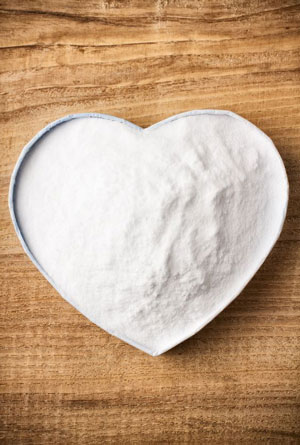 Baking soda has several medical and health applications. It is most commonly ingested in a solution with water to relieve heartburn and acid indigestion. In clinical medicine, it has been used to treat aspirin overdoses and other illnesses. For first aid applications, baking soda can be used to treat scalds while medical attention is pending.

Sodium bicarbonate may be used to treat hyperkalemia, or an elevation of blood potassium levels in the clinical setting. Sodium bicarbonate can be delivered intravenously by medical doctors to raise the pH of blood in cases of acidosis. It may also be used topically as a paste to relieve itching or rash inflammation. One recent medical study even found that baking soda was effective at slowing down advanced kidney disease.

Like other antacids, baking soda should be used only in moderation to treat heartburn. Also foods that trigger heartburn should be avoided like tomato based foods, fatty foods, chocolate and other foods as well as drinks like coffee.

Many toothpastes have baking soda in them, because the compound is shown to be beneficial for cleaning teeth and mouth hygiene. It also neutralizes acidity in the mouth that results from bacterial waste products, and thus it freshens breath. It also works as a mild antiseptic to prevent infections in the mouth. It can be used to relieve the pain from canker sores as a mouthwash.

Baking soda can be put into sneakers to deodorize them, and it can also be massaged into feet to clean them or help treat athlete’s foot.

Baking soda can be added to bathwater to relieve skin irritation, rashes, or bug bites. It can also be rubbed on the skin on a damp rag for this same purpose.

Baking soda has mild exfoliant properties due to the round shape of the particles, and when mixed with water and scrubbed gently into the skin with a sponge it can remove dead skin cells. The inflammation from sunburns can be partially relieved with a solution of baking soda and water.

Kidney stones are small hard masses in the kidney and some studies suggest that urine acidity can lead to the formation of kidney stones. Baking soda may prevent kidney stone development if take on a semi-regular basis but there have been no scientific studies on this matter. A doctor should be consulted before taking a regimen of baking soda for kidney stone prevention.

In the case of urinary tract infections, there is anecdotal evidence that baking soda may have beneficial effects by raising the pH of urine and reducing bacterial multiplication, but there is no scientific evidence of this.

One recent student in the Journal of the American Society of Nephrology found that baking soda improved kidney function for patients with advanced kidney disease. This was a single study with no placebo group, and further studies would need to be completed to prove if baking soda is beneficial for kidney disease.

With a wide range of uses, and several health and medical benefits, hygienic, and cleaning uses, baking soda is an inexpensive and useful compound to have in the house. However, like any other compound that can have health implications, the usage of baking soda for health benefits or medical treatments should be discussed with a physician beforehand. It is safe to use it for the previously mentioned hygienic purposes as long as it is not ingested in large quantities.

More scientific studies on the effectiveness of baking soda in helping to treat kidney illnesses and other kidney related problems would need to be performed, but it seems that this is a promising avenue for the another medical application of baking soda.

There is no doubt, however, that baking soda is effective for treating heartburn and indigestion. In the case of topical skin related treatments, it may be better to use baking soda as a complement to prescription or over the counter products for treatment, as long as there are no interactions. Baking soda is useful and safe for mouth hygiene, and it can be used as a mouthwash or as a paste for cleaning teeth.