The history of the Flowerhorn fish is really quite interesting as this particular species is a cichlid hybrid that is less than a couple of decades old! First bred in Malaysia, the Flowerhorn quickly became extremely popular on a global level because of their great beauty and the folklore surrounding them. Locals proclaimed they brought good fortune and the legend quickly spread. They are actually not difficult to breed as long as you have the appropriate items on hand and understand the ‘personality’ of these predominantly aggressive fish. Here is some vital information on how to breed the Flowerhorn fish. 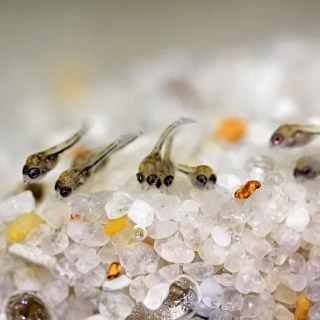 The first thing to understand is that the Flowerhorn fish may or may not readily take to the mate you choose for them. Because it is possible to almost predetermine the physical characteristics of the offspring by choosing suitable parents, you would hope that they would get along. Sometimes this takes a bit of work and may need you to take some precautions. You will know that your female is ready to breed as she will actually change in physical appearance by developing dark stripes.

The male is extremely aggressive and will even attempt to harm the female at times. If this happens it will become necessary to separate them by a clear permeable plastic screen. Also, if you are going to try to breed more than one pair, pairs should also be separated in the aquarium. The key is to keep an close eye on them as the males may even become more aggressive when in the presence of other males.

The Aquarium and the Breeding Process

When preparing to breed the Flowerhorn, it is imperative to have quite a large aquarium. They can, when not breeding, be kept in an aquarium with other fish but be mindful that those fish also need to be aggressive species. Most breeders suggest that the breeding aquarium be decorated with colorful rock formations and if you cannot provide a separate aquarium at least separate them from other fish by a glass or plastic separator. Alkalinity is not extremely important but the water should probably be pH balanced with a temperature approximately 82 degrees Fahrenheit (28 degrees Celsius).

Again, it can’t be emphasized enough to have a separator ready should the male be overly aggressive to the female. There have been times when a male Flowerhorn even caused the death of the fish that was meant to be his mate. If the male needs to be separated, a permeable separator will allow the eggs to be fertilized. It is further suggested that if a water pump is used that the water flow from the male to the female so that the male’s sperm can still get through to fertilize the eggs. Bear in mind that if this method is used you should not use a filtration system as that would defeat the purpose.

Feeding Before and After Spawning

Most commercial breeders recommend that Flowerhorn fish be well fed prior to breeding which should not be too very difficult. Flowerhorn accept almost any kind of food. As an aside, another way in which to tell if they are ready to breed is by observing what they eat. Flowerhorn fish tend to lose their appetites just before and during breeding. Since the fish will not eat much during this time it should not be necessary to change any more than 20% of the water a couple times a week. After spawning the same holds true for cleaning the tank.

Once the fish have spawned there are a couple of different schools of thought on when to separate the fry from the parents. Some breeders say that they should be separated right away while others say that they should only be separated when the parents lose interest in them. This is because Flowerhorn fish are very good parents and take excellent care of their offspring. In either case, a liquid diet that is transitioned to pellets is recommended.

While it is extremely easy to breed the Flowerhorn, you should not get your expectations set too high. This particular hybrid species tends to spawn a tremendous amount of low quality fry. Although they can be extremely beautiful, there is not an abundance of high quality fry spawned. This may be another one of the reasons why they are in high demand. Yes they are a beautiful fish and yes they are highly treasured, but don’t expect every baby to be as lovely as the parents.

Even so, since they are so easy to breed and will breed year round, there is always the next time. If you only get a few high quality fish there will be plenty more to choose from next time around. Whether you are trying to discover how to breed Flowerhorn fish for commercial purposes or as a hobby, you will have hours of pleasure in watching your Flowerhorn go through the rituals. This is one reason that this particular fish is so popular as tank fish. Not only are the beautiful but they are so intricate in the way they perform all of their breeding rituals that they are a wonder to watch.