Shih Tzus are some of the most sought after dogs and for this reason many people like to breed their dog at least one time during its lifespan. If you have a Shih Tzu that you have been considering breeding or even a breeding pair that you purchased just for this reason, you will want to get as much information as possible so that you will be able to detect your Shih Tzus pregnancy early on. Dogs in general have a very short gestational period of anywhere from 56 to 63 days. For this reason it is imperative to the health of the mother and puppies that proper prenatal care begin as soon as possible.

Look for Changes in Behavior 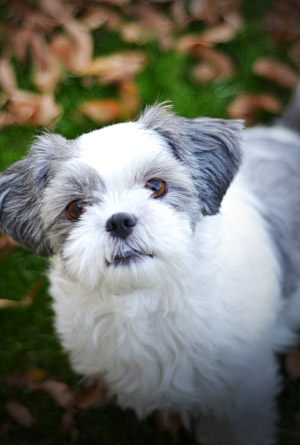 The very first sign that your Shih Tzu may be pregnant is going to be behavioral changes. She is bound to become clingier and show a greater need for your attention. She may become grumpy or downright mean during the first few days of pregnancy. She may even become depressed or lethargic looking. This is because dogs, just like humans will go through some major hormonal changes during pregnancy. You have to keep in mind that because of the much shorter gestational period that dogs have the hormone surges may be much more intense than what we as humans endure. If your female Shih Tzu is showing some marked changes in her behavior you may have just had a successful breeding.

You probably already know that when your female Shih Tzu goes into heat her vulva will swell up. The same happens when she is pregnant only this time she will not bleed and the swelling will not go down. In addition, she may begin licking it as it may become a bit uncomfortable to her. This is the same type of behavior she may have while in heat but again the presence of blood will be absent. You will generally not have to look very closely to notice any changes in her vulva as it will usually be quite evident.

One of the first signs that your Shih Tzu is pregnant is a change in the size of her nipples, as well as the texture. If she is pregnant her nipples will become larger, extend further and also become swollen in diameter. They will also feel hard to the touch. Keep in mind that this can also happen in false pregnancy so look for other signs such as the above mentioned when using this as a guide to whether or not your Shih Tzu has become pregnant. If you intentionally breed your dog then you should start watching for signs as early as the first week after.

It is not going to take very long at all to start seeing the signs that your Shih Tzu is pregnant and her tummy will begin swelling rather quickly. Watch her as she walks and see if you notice her gait has change any and that she seems to be swaying back and forth. If you notice a bump on either side of her then it is unlikely due to the fact that she has eaten too much, at least not if she is showing all of the other signs as well. Again, dogs only stay pregnant for a couple of months so things happen at a much more accelerated rate than they do with people.

A pregnant Shih Tzu may begin showing nesting characteristics toward the end of her pregnancy. Hopefully by the time this occurs you will have known for some time of her pregnancy. However, there are some cases in which Shih Tzus only have one pup per litter so there is always an off chance that her pregnancy will go unnoticed for awhile. In any case, when your Shih Tzu begins nesting she will likely appear restless and look as though she is searching for something. That is because she is in fact searching for something; a place to give birth to her pups that will be an ideal and safe place. Do not think that you are going to set up a birthing basket and that she will have her puppies there. If you do think this then you may awaken one day to find her and her pup/pups under your bed or in your broom closet. Dogs of all kinds like to choose their own area and there is not much to be done about this other than confining her to a specific room toward the end of pregnancy.

Once you are aware that your female Shih Tzu has become pregnant then you will want to start her on a good prenatal nutritional program. Begin feeding her puppy food as this is the most ideal diet for a pregnant dog. You may also buy her puppy replacement milk and allow her to drink that a couple of times a day as it is high in protein and fat. Your vet can provide you with vitamin supplements for her and you should be sure she gets them every day. Watch her closely to be sure she is eating and drinking enough. It is vital that you pregnant dog get all the right nutrition, not just for her puppies but also for her.

Determine How Many Puppies She Is Having

The typical Shih Tzu litter is right at around four pups, give or take one. However, as mentioned above there are some cases in which only one pup is born. There are also cases in which ten pups are born. It may be a good idea to find out how many pups your dog is going to have by getting an x-ray done on her sometime around the 45th day of pregnancy. If there is just one pup there is an off chance that it could wind up getting too big in which case an emergency C-section could become necessary. Your vet will be able to tell you more about what to expect on the day of birth. If this is your first breeding then try to stay calm as your dog may pick up on your emotions.

A dogs pregnancy really goes by rather quickly so it is important to be fully prepared before even attempting a breeding. However, there are some situations that are beyond our control such as an accidental breeding. The thing to remember is that dogs have been having puppies since the beginning of time and have an instinct that will tell them just what to do. Your dog will probably need little assistance from you and may wish that you would remain in the background as much as possible. Obviously if there are medical issues or you can see signs of distress then you will want to intervene. But try to stay out of your female Shih Tzu’s way as much as possible and let nature take its course.