Anybody who hears about French cuisine would say that French meals are often rich and very savory. French lunch and dinner meals are known to be very satisfying and most people who eat at French restaurants don’t get to finish the servings provided to them. It therefore comes as a surprise that a traditional French breakfast is not as heavy as other European breakfast meals. Don’t expect to find sausage, ham, eggs and bacon in a traditional French breakfast. What you can expect are those that are listed below: 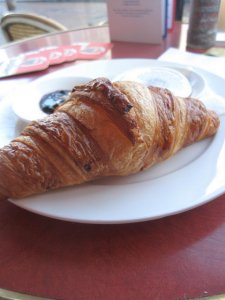 On a regular day, people eat slices of French bread served with jam and/or butter. The baguette or farmhouse bread is a French breakfast staple. Children are allowed to eat bread rolls with chocolate filling. During special days such as Sundays, families often eat freshly-baked croissants that are bought from local bakeries. The usual serving is 2 croissants per person and it is not advised to exceed this number because croissants have a high calorie content. Croissants are often eaten plain, with jam, or dipped in coffee bowls. However if you want to be truly French NEVER eat a croissant with butter, because French people never do that.

The French have always preferred drinking coffee in the mornings, so it is expected that a traditional French breakfast is served with coffee. However, children are allowed to drink hot chocolate or fruit juice instead. Tea is also commonly served in French cafes, although tea is more often consumed by tourists visiting France.

Since most dietary experts regard a French breakfast as petit and imbalanced, the French have strived to remedy the situation by adding servings of fruit alongside the bread staples. Sometimes, French people eat freshly sliced fruits. In winter, the French prefer to eat preserved fruits for the extra sugar that they need. Fruits are not wholly consumed. In fact, 3-4 slices of peaches are enough for every single serving of a traditional French breakfast.

A traditional English breakfast is the common bacon/ham and eggs served with toast, jam, and coffee. English breakfasts are a lot heavier. In fact, some dietary experts regard this breakfast as “too much to take when your body has just woken up”. French breakfasts are a lot lighter and are never served with meat. However, you cannot say that none of these breakfast types are good because one is over-nutritious and the other is under-nutritious. The difference may easily be attributed to tradition, differences in climate, and the needs of the people according to their energy consumption. It always depends on a person’s preferences and customs. Whatever you choose, don’t forget to enjoy your hearty breakfast!