It’s frustrating isn’t it? To a degree women are taught by society that men will be the aggressors. In a multitude of sociological ways it is neither appropriate (nor is it rewarded) when a woman is viewed upon as the assertive one in a romantic situation. There are tons of negative consequences to being “that kind of woman” and all of them allude to promiscuity or some kind of defective quality if a woman presents with the confidence to approach a guy she is interested in.

Society teaches that for women, it’s not okay to make the first move. But if you ask the majority of men they are thrilled with the idea of a woman taking that pressure off of them. The idea of a woman making overtures is exciting and a fresh change of pace for most men who agonize trying to read (and frequently misinterpreting) body language and the emotional complexities of signals and communication from the opposite sex. Keep in mind too that despite the high risk stakes of rejection if the man gets the signals completely wrong, there is also the potential to get into some legal trouble. Going for the epic kiss for a guy could land him with a harassment charge if he botches the job entirely and so is it any wonder that they hesitate? 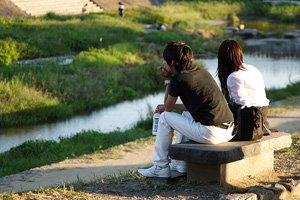 That still leaves us with a bit of a quandary. If women are taught to wait for guys to make the first move and if men are frankly terrified to do it, there is something of a stalemate in progress between the genders. Some progressive thinking and maybe an entire overhaul of our outdating social romantic paradigms might be in order before the communication gap leads to dire consequences. Or perhaps this already accounts for the declining global birthrate? One can only muse and bemuse.

The Risks for Men

Men are subject to an incredible amount of sociological change in the last fifty years. It must be very confusing to be a man in the present day. Women’s liberation movements aside, it was not one individual factor that contributed to the change but a rapid sociological evolution of women. For most men it can feel a lot like having the rug pulled out from under them having been raised with specific expectations and messages about women and female relationships (they are taught the rules by their parents as women are and then sent out for prolific field testing in their teens and twenties). Most men find women to be unpredictable. A true enigma faces the modern man when they are really not sure what is “okay” and what is not.

Most men have a sense of what it means to be a gentleman. Society place expectations on them to be polite and respectful and to “care” for the company of a female socially. Of course there are exceptions to this rule for both genders, naturally. However, overall men have a sense that they are expected to take great care in their dealings with women. There can be consequences legally (if he moves too far too fast and is misinterpreted). There are social consequences (what if he doesn’t move fast enough and the woman feels like he isn’t interested?). Is the woman even single? It’s really hard to tell these days and no guy wants to start chatting up a nice looking woman only to have her boyfriend come round the bend and put out his headlights.

It’s pretty tough being a guy don’t you think? With all of these potential chaotic factors weighing heavily into consequences they would simply rather not face it’s not hard to imagine why a man would hesitate. In fact, it’s amazing they don’t require a mandatory affidavit swearing that the woman is interested, eligible and receptive. Sadly those kinds of assurances do not exist.

One of the inherent components of the female personality is the need to know “why?” The investigations into the reasons behind someone’s actions are pivotal to the female thought process. If we can understand why someone acted in a specific way it makes it easier for us to take a somewhat maternal role and point out errors, make suggestions and even forgive oversights. The need to know roughly translates into a burning need to relate and understand. This is a good thing and there is nothing wrong with a reasonable query or approach to achieve openness in a relationship.

One of the most common mistakes women make however with shy men is the level of inquisition. It is okay to ask a question or request further elaboration on an action, but it should be done as a gentle prodding of inquiry if the desired result is to understand him. Unfortunately gentle inquisition gives way to the equivalent of “The Spanish Inquisition” which is counter effective. A forceful approach to getting men to open up about their feelings only furthers their sense of panic and thrusts them deeper into a self-preservation mode where they are unlikely to share anything with you at all. They go into lock down the second they feel emotionally attacked.

It might be annoying that the guy you are interested in does not have the confidence to make the first move. You may be stuck in a place where you are even angry that you are being forced to do it when you think it might be “his job” to do so. What’s a girl to do? If you like the fellow then it might require this kind of intervention but if he is a painfully shy person interested in a very outgoing girl, the reality is that you will need to get used to the idea of taking the lead. And if it bothers you a lot then you should consider dating someone who is more outgoing.

Some quick tips to try to get him to come out of his shell and make the first move:

• Cultivate some alone time in a zone or territory where he feels completely comfortable (his house or favorite pub). Get him squarely into his own “man-land” and increase the chances of him opening up to you about his feelings.

• Don’t compare him to other guys. “My ex-boyfriend was so shy that…” As soon as you start to compare him to another guy you are planting additional reasons for him to feel anxiety and question whether he is “good enough” to make an advance.

• Sweep him off his feet with an overt romantic gesture of your own. Buy him a single red rose and write a coy romantic card such as “Do you like me?” and draw check boxes for yes or no and ask him to return the card to you. A sweet overture which is full of charm and not over the top for broaching the sensitive issue.

Be prepared for the impossible possibility however. If a guy won’t make the first move there is always the chance that he’s “just not into you” romantically. If you find that to be the case assure him that you will continue to be friends and thank him for clearing it up for you. Move on and find someone who might be a little more forthcoming with their intentions if shy guys are not a great match for you.